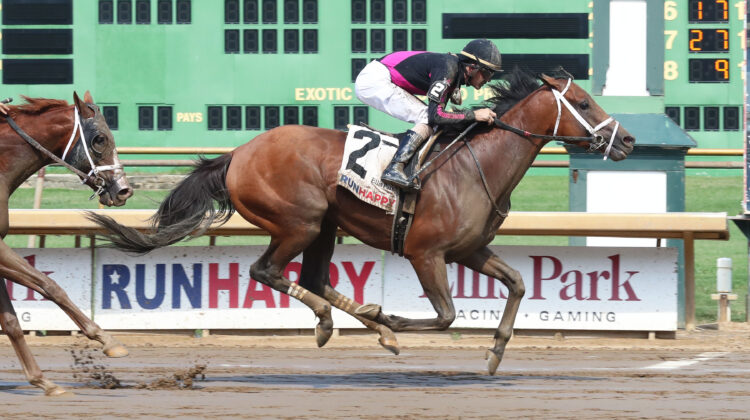 HENDERSON, Ky. .– Legionnaire now has matched his big brother Art Collector as a 3-year-old winner at Ellis Park. But while Legionnaire captured a maiden race last Saturday, don’t expect him to run back in the $200,000 RUNHAPPY Ellis Park Derby on Aug. 14.

That’s the race future Grade 1-winner Art Collector won in the COVID season of 2020 when the Ellis Park Derby fell a month after he captured Keeneland’s Toyota Blue Grass Stakes (then a Grade 2). Even without fans in the grandstand, Art Collector’s Ellis Park Derby — the one time it served as a Kentucky Derby prep — goes down as possibly the most significant race in the track’s century of history, receiving extensive state-wide and national media attention.

Art Collector was one of the favorites for the Kentucky Derby, delayed to early September that year, but was withdrawn on the morning of entries with a bruised foot. A month later he finished fourth in the Preakness Stakes.

Like Art Collector, Legionnaire is out of owner-breeder Bruce Lunsford’s mare Distorted Legacy, a daughter of his foundation mare Bunting. Art Collector was sired by the late 3-year-old champion Bernardini while Legionnaire is a son of the red-hot stallion Into Mischief. Claiborne Farm, where Legionnaire was born and raised, liked the youngster so much that the fabled breeding operation in Paris, Ky., bought half-interest in the colt. But none of the team is interested in throwing Legionnaire into the deep end off of a single win on his third attempt.

“He caused us to step on the brakes a couple of times,” said Tommy Drury, who trains Legionnaire and had Art Collector as a 3-year-old. “Just growth issues more than anything else. I don’t think he’s quite as developed at this stage of the game as maybe Art Collector was. But you can certainly see where he’s coming and where he’s going the right way.”

Agreed Lunsford: “This horse looks like he’s kind of ready to go if you just take your time with him.”

Art Collector won four straight victories with Drury, capped by the Blue Grass and Ellis Park Derby. Drury started him off as a 4-year-old before the decision was made to ship Art Collector to Bill Mott for a New York-based campaign and the goal of becoming a Grade 1 winner, which was accomplished in Belmont Park’s Woodward Stakes last fall.

Drury has had Legionnaire since he came in as a 2-year-old. The colt ran for the first time last Dec. 26 at the Fair Grounds, finishing ninth in a six-furlong race. He didn’t run again until June 5 at Churchill Downs, finishing second (albeit beaten nine lengths by the 4-year-old Elite Power) at seven-eighths of a mile under regular rider Brian Hernandez, who also rode Art Collector for Drury.

“We got banged around out of the gate, stuck all the way in the back,” Lunsford said. “I thought we were completely out of it. Brian gave him a heck of a ride through the pack to get second. The horse that beat us is the real deal. I know they think he’s a Grade 1 (horse). That race, I think we learned a lot.”

The result was a length victory Saturday at a mile in the mud at Ellis.

“I think that race the other day was just what the doctor ordered,” Drury said. “We wanted to get him in a spot where we could get him back and get him some education and have him going the right way at the end of it. The race set up well for him. He kind of inhaled those horses, and then it looked like once he got there, he got a little lost. I think he’s a horse that just needs to continue to mature — and I think the sky’s the limit where he could potentially end up.”

The owners and Drury, however, are in no hurry to shoot for the stars. Drury said an entry-level allowance race at 1 1/16 miles is a logical next step. Lunsford also is content to wait on the future.

“I think this horse is pretty good, by the way,” Lunsford said in the understated parlance of horsemen. “I think he might be pretty good.”

“He’s going to tell us that,” Lunsford said. “I think Art Collector, by getting hurt, we never really got to get what we could have had.”

When asked about the patience that was shown in developing Art Collector, Drury pointed to another Claiborne horse and current stallion as his role model for Legionnaire. That’s 2010 Breeders’ Cup Classic winner and older male champion Blame, who went 9 for 13 to earn more than $4.3 million, capping his career as the only horse to beat the great mare Zenyatta.

“Al Stall, the job he did with Blame and allowing him to develop and get good later on,” Drury said. “Knowing that he had a nice horse and just being patient and letting the horse do things in his time frame. I think that was as good as training job as I ever saw anyone do. I guess in a way I’ve had that in the back of mind a little bit with this horse.

“There’s no question he has a ton of ability and is a nice horse. But he hasn’t been the type where you feel like you could really mash on the gas pedal. Fortunately he’s got the right owners who have allowed him to come along at his pace. Things are falling into place for him. I’d really like to see this horse get around two turns once. We’re going to let this horse take us along. See how he runs next time, evaluate that performance and move forward from there.”

Drury says he sees similarities between Legionnaire and Art Collector as far as what they have between the ears.

“Definitely mentally,” he said. “Art Collector was always a very easy, classy type horse to be around. Legionnaire is the same way. He’s one of those that it seems people are always asking me on the racetrack ‘who’s that?’ He just carries himself with some presence. Seeing them around the barn and knowing both of them, you’ll see a lot of things that kind of remind you of Art Collector. He likes peppermints as Art Collector did – and he’s almost as spoiled.” 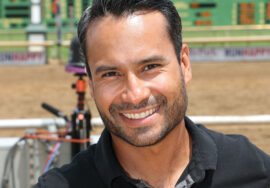