LOUISVILLE, Ky. (Sunday, Nov. 11, 2018) – Trainer Norm Casse is closing in on his first year as a trainer with 14 victories but the 35-year-old Louisville-native hopes improving filly Angel of Mischief can give him his first stakes victory in the $200,000 Mrs. Revere (Grade II) on Friday, Nov. 23 at Churchill Downs.

“This is going to be the most logical spot to run her in,” Casse said. “This filly is still a little green but her talent is there. We added blinkers for her second and third starts and it’s really helped her.”

Owned by Glencrest Farm and Hold Your Horses Inc., Angel of Mischief sports a two-race win streak after breaking her maiden on Sept. 8 at Kentucky Downs and winning a first-level allowance race at Keeneland on Oct. 11.

Casse, who began training on his own in early 2017 following a long stint as an assistant to his father Mark, has won nearly 20 percent of his starts and recently started Belle Laura in the Breeders’ Cup Juvenile Fillies Turf.

“I came into the year with a goal of winning 10 races and so far we’ve won 14,” Casse said. “It’s been a good year. Churchill Downs is my home track so it was very special to run Belle Laura in the Breeders’ Cup.”

Casse, based in Barn 41 at Churchill Downs, is slated to close out the Fall Meet in Kentucky before shipping his horses to Palm Meadows in South Florida for the winter.

·        Edgar Cano (exercise rider): “Rest in peace my great friend. Your wife, children and all of your friends will always be proud of you.”

·        Zeke Castro (exercise rider: “Cuba’s smile would’ve brought a smile to anyone when they would talk to him or just say hello. I’m praying for his family and loved ones. Our racetrack community is heartbroken.”

·        Greg Geier (assistant trainer to Kenny McPeek): “It’s just very tough to deal with. We’re all still hurting. He was a great man.”

·        Jeff Hiles (assistant trainer to Kenny McPeek): “It’s just so tragic. He was with my string of horses for the last four years so I got to know him pretty well. He was always working hard for his wife and sons back in Cuba. My heart goes out to his family and friends.”

·        John Ortiz (trainer): “Odanis Acuna was taken from us too soon. I’ve seen firsthand how hard this man worked for his family at Churchill Downs and Oaklawn. It’s a tragic loss of a friend, father, husband and colleague. His smile will be missed every morning.”

·        Raul Vizcarrondo (freelance exercise rider and valet): “He was always so happy. I knew him really well when I worked for Kenny (McPeek). He wanted the best for his wife and kids. He was always working hard.”

A Go Fund Me page was set up by McPeek to help Acuna’s family back in Cuba. To donate and for more information, visit: https://bit.ly/2zIXK8m

Landes is the featured honoree at the KTO’s 31st annual awards gala on Saturday at the Kentucky Derby Museum. Cocktails begin at 6 p.m. ET, with dinner at 7 p.m. Tickets are available for $125, including dinner and drinks, by contactingMarlene Meyer at (502) 458-5820.

The Warner L. Jones Jr. Horseman of the Year Award recognizes individuals for outstanding contributions to Kentucky racing and sharing the passion exemplified by Jones, who spent 50 years on the Churchill Downs board, including eight as chairman during the iconic track’s resurgence. Jones was the inaugural winner in 1988, six years before his death.

“It means everything,” Landes said. “Nov. 1, 1977, I walked into the office as an employee. I started out about two years earlier as a boarding client with a mare at Mr. Jones’. I took a year off from the practice of law to learn the horse business. And 41 years later, here I sit.”

Landes grew up in York, Pa., purchased his first racehorse while in college at Susquehanna University and won his first race at Penn National in 1972. By that time, he already was attending the University of Louisville’s Brandeis School of Law because of its proximity to horse country.

Hermitage Farm has been his sole employer in the horse business. Landes has served the farm through three ownerships, officially becoming general manager when Carl Pollard purchased the farm upon the death of Jones in 1994 and currently for Louisville power couple Laura Lee Brown and Steve Wilson.

Entries for Saturday’s card will be drawn Wednesday. 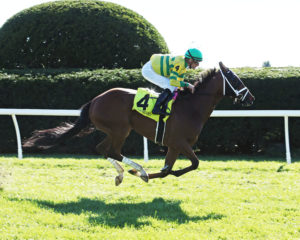 DOWN THE STRETCH – Racing at Churchill Downs continues Sunday with a first post of 1 p.m. (all times Eastern). There is a $93,371 carryover in the 20-cent Single 6 Jackpot, which begins in Race 5 at 3:03 p.m. and a $7,195 carryover in the Super Hi-5 in Race 10 at 5:36 p.m. … There is a Veterans Day celebration Sunday at Churchill Downs where active and retired military members were invited to enjoy a day at the races with free general admission. The first 5,000 fans on Sunday will receive a free 2019 Churchill Downs wall calendar sponsored by Humana. … Churchill Downs’ all-time leading trainer Dale Romans is on the cusp of 2,000 career wins. The South Louisville native began the day with 1,995 wins and has one entry Sunday.