Jan. 18, 2019 (FLORENCE, Ky.) – Midnight Pleasure charged from last to first in the $50,000 Forego Stakes Friday at Turfway Park, gobbling up the last half-furlong to win by a neck in a four-way rush to the wire. Mr Ashley, off at 67-1, was second, a nose better than third-place Torazo, who finished a neck ahead of Lanier in fourth. 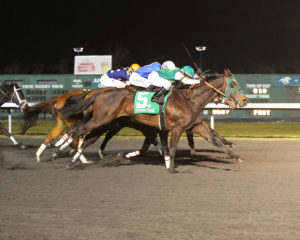 “The trainer (Mick Ruis) just told me not to give up on him,” said winning jockey John McKee. “I knew there was a lot of speed in the race, so I just took my time with him early. Down the lane his class came out and he really powered home. Never give up—he kept coming and coming.”

The speed swapped the lead throughout the 6 ½ furlong race. Goneghost, the 9-5 favorite, rocketed out of the gate to set the first quarter in :22.40 but yielded to Shadow Tracer, who set the half-mile mark in :44.82. Mr Ashley took over in the stretch, getting six furlongs in 1:10.40 before Midnight Pleasure caught him at the wire to finish in 1:17.08.

A 5-year-old gelded son of Midnight Lute, he is out of the Vindication mare Platinum Preferred. He was bred in Kentucky by Roger Long. Midnight Pleasure is owned by Mick and Wendy Ruis’s Ruis Racing LLC, for whom he has earned $247,298 and compiled a record of five wins, two seconds and six thirds from 21 starts.