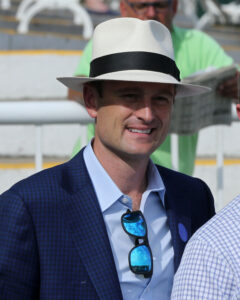 Starting with Vexatious at 5:30 a.m. on the dirt and concluding with Bandua at 10 a.m. on the turf, trainer Jack Sisterson had his Calumet Farm roster of Fall Stars Weekend hopefuls go through their final major preparations Sunday morning at Keeneland.

Vexatious came to Sisterson’s barn in May after beginning her career with Neil Drysdale and posting a victory via disqualification in last fall’s Rood & Riddle Dowager (G3) on the grass. Next Sunday she will try to add a dirt score to her resume in the $500,000 Juddmonte Spinster (G1).

“I think she is better on the dirt,” Sisterson said after Vexatious worked a half-mile in :48 with Adam Beschizza aboard. “You look back to when she was 3 in 2017 and she ran against the boys, finishing third behind (eventual Breeders’ Cup winner) Battle of Midway (in an allowance race at Santa Anita), and was fourth in the Kentucky Oaks (G1).

“I asked the farm if it would be OK to pencil in the Spinster and work back from there.”

Vexatious returned to the dirt for the first time in 13 months when she finished second to Juddmonte Spinster rival Blue Prize (ARG) in the Summer Colony at Saratoga. Since that race, Vexatious has worked four times here counting Sunday morning.

“She should have no excuse after that,” Sisterson said of the work that opened with a :24 quarter and a five-eighths gallop out in 1:00.40. “I got her the last eighth in :11 and 1 and she had a good gallop out.”

Bandua will be cutting back in distance for the $1 million Shadwell Turf Mile (G1) following a third-place finish in the 1¼-mile Arlington Million (G1) and a victory in the 1 3/16-mile Arlington Handicap (G3).

“He’s a horse that’s full of energy and we had confidence in him to run him a mile on the dirt (in the Grace 3 Westchester),” Sisterson said. “I wish I had a whole barn like him. He tries every time.”

Bandua finished his Shadwell Turf Mile preparation Sunday morning by working a half-mile on the firm Keeneland turf course in :49 with Beschizza up. He covered the final quarter-mile in :23.40.

With Beschizza aboard and working in company with Speed Effect, Lexitonian covered a half-mile in :47.20 and galloped out five-eighths in :59.80. Lexitonian returns to the dirt after finishing seventh in the Nevada State Bank Franklin-Simpson (G3) at Kentucky Downs on Sept. 12.

“We are going to keep him on the dirt,” Sisterson said of Lexitonian, who has two stakes wins this year on the dirt.

Flap Jack, who scored his first win in the Arlington-Washington Futurity, worked a half-mile in company with Truculent in :47.20 with Sophie Doyle aboard. Flap Jack galloped out five-eighths in 1:00.

Flap Jack was fifth in his lone dirt start, but Sisterson was not discouraged by that.

“He missed the break that day, rushed up six wide and then got tired,” Sisterson said. “He worked well out of the gate and after that I said, ‘I think we may have something here.’ ”

George Turner and Clipper Logistics’ Suedois (FR), who pulled a 9-1 upset in the 2017 running of the Shadwell Turf Mile (G1), arrived at Keeneland’s quarantine barn Sunday at 7:15 a.m. along with three other horses from Europe.

Trained by David O’Meara, Suedois is expected to pass the entry box Wednesday for Saturday’s $1 million Shadwell Turf Mile, a Breeders’ Cup Challenge race that earns the winner a fees-paid berth into the $2 million TVG Breeders’ Cup Mile (G1) to be run Nov. 2 at Santa Anita.

Two other Shadwell probables were on the plane with Suedois: Godolphin’s Vintager (GB), trained by Charles Appleby, and Haven’t A Pot and Richard Foden’s Robin of Navan (FR), trained by Harry Dunlop.

The horses should clear isolation early Tuesday and go to the track that morning.

Twenty-seven horses worked over a firm Keeneland turf course Sunday morning, many in preparation for Fall Stars Weekend that kicks off the 17-day Fall Meet. 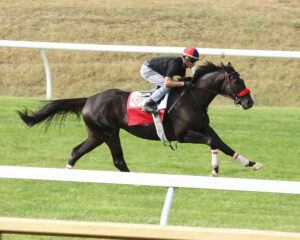 Ashbrook Farm and BBN Racing’s Concrete Rose, who ascended to the top of the 3-year-old filly turf ranks following victories in the Belmont Oaks Invitational (G1) and Saratoga Oaks Invitational, continues to progress well from surgery for a hairline fracture of her right front, according to trainer Rusty Arnold.

“I haven’t seen her for three or four weeks, but the surgery went well and the prognosis is good,” Arnold said of the filly, who has won six of seven starts in her career that includes a triumph in last fall’s JPMorgan Jessamine Chase (G2). “She will get 90 days off, and I plan to pick her up Dec. 1 when we head to Florida and look for a race for her probably in March.”

The following is a list of probable starters for Keeneland’s Fall Stars Weekend stakes on the first three days of the Fall Meet compiled by Keeneland Stakes Coordinator Allison De Luca.