The Preakness, traditionally the Middle Jewel of the Triple Crown, concluded the classic series for 3-year-olds after being postponed from May 16 due to the COVID-19 pandemic. The Maryland Jockey Club’s signature event was renewed without fans in attendance, as were the Belmont Stakes (G1) on June 20 and the Kentucky Derby Sept. 5. 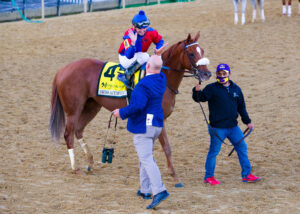 Swiss Skydiver ($25.40) defeated Authentic by a neck to become the first filly since Rachel Alexandra (2009) to win the Preakness while thwarting the bid by the 3-2 favorite’s trainer, Bob Baffert, to win a record-breaking eighth Preakness.

Trained by Kenny McPeek, the 3-year-old daughter of Daredevil joined Nellie Morse (1924), Rhine Maiden (1915), Whimsical (1906), Flocarline (1903), and Rachel Alexandra as the only fillies to beat the boys in the Preakness. She joined such a rare club while turning in a final running time of 1:53.28, second only to 1973 Triple Crown champion Secretariat’s 1:53 clocking.

Swiss Skydiver, who had finished second behind Art Collector in the July 11 Blue Grass (G2) at Keeneland in her only previous start against colts, was the beneficiary of a quick decision by jockey Robby Albarado that helped propel her to the lead leaving the backstretch. From there, she fought off a relentless outside challenge from Authentic around the turn and throughout the stretch run to win her fifth graded stakes this year.

“She is just a real bull. She loves what she does every day. She likes to go to work. She wants to go out early because she doesn’t want to wait to go out,” McPeek said. “And Robby and I have had a great week here this week. We basically flew up together. We had breakfast, lunch, dinner. I think we were rowing in the same direction and the mojo was good and it happened.”

Swiss Skydiver provided Albarado his first Grade 1 stakes victory since 2017. The veteran jockey, who rode Curlin to a Preakness score in 2007, has ridden more than 5,200 winners during his career, hadn’t won a graded stakes this year until Saturday. When Tyler Gaffalione opted out of traveling to Pimlico for the Preakness, McPeek decided to give Albarado a shot despite the fact that his business had slowed the past few years. 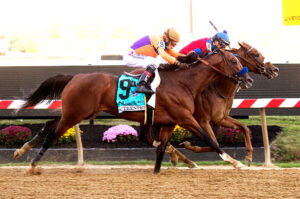 “Well, owe it all to Kenny. I mean, he believed in me still and, sorry, it’s Kenny. It’s all Kenny,” Albarado said. “People started thinking I can’t do it anymore and Kenny was there, just when I needed someone.”

It looked like a genius decision by McPeek following his first success in the Preakness. Albarado saved ground aboard Swiss Skydiver around the first turn and along the backstretch before easing her around tiring pacesetter Thousand Words, who set fractions of 24.48 and 47.65 for the first half mile, nearing the half-mile pole. After splitting horses, Albarado sent Swiss Skydiver back to the rail, where she pulled alongside Authentic heading into the far turn and was talented and tough enough to beat the Derby winner to the finish.

“I’ve had a lot of special horses in my career, but she’s definitely right there at the top right now and I don’t see a long time until another one does something like that to me,” McPeek said. “We work hard every day. And it’s a game of failures is the thing about it. I’ve had actually a streak for Peter that I wasn’t proud of. It seemed like we went six or seven years and we really didn’t have the kind of horses we wanted.”

Swiss Skydiver captured her fifth graded-stakes win in a season that included triumphs in the Gulfstream Park Oaks (G2), Fantasy (G3) at Oaklawn, Santa Anita Oaks (G2) and Alabama (G1) at Saratoga. She was coming off a second-place finish in the Kentucky Oaks (G1) at Churchill Downs Sept. 5.

Authentic, who captured the Kentucky Derby with a dominating front-running performance, was beaten to the lead by Thousand Words, and sat outside his Baffert-trained stablemate around the first turn and into the backstretch before taking a brief lead.

“By the backstretch, I tried to open up, but he just stood there and Swiss Skydiver came to him,” said Hall of Famer John Velazquez, who was seeking his first Preakness win aboard Authentic. “I tried to get him rolling again, but he just stayed with that other horse from the half-mile pole to the wire.”

When Baffert saddled Triple Crown champion Justify for a victory in the 2018 Preakness, he had tied the record for most wins by a trainer with Robert Wyndham Walden, who saddled seven winners between 1875 and 1888.

Authentic finished 9 ¾ lengths clear of third-place finisher Jesus’ Team, who was a neck ahead of Art Collector, the 5-2 second choice who had won the Ellis Park Derby and Blue Grass in his previous two starts.

“I was hoping he was on the lead. But he got beat. He had the whole stretch to get by her. She ran a gallant race,” Baffert said. “He’s a free-running horse and likes to be on the lead. I saw he wasn’t on the lead and was struggling a little bit.”

Authentic’s second-place finish marked the first time that a Baffert-trained Kentucky Derby winner lost the Preakness. However, his previous five Derby winners came back in two weeks to win the Preakness. There was a four-week span between the two classics this year.

“We had to get the lead. He runs better on the lead. He likes to be out there running fast. When I saw 24 [seconds] that’s really slow for him. That’s how he won the Derby, get him running. But [Velazquez] said when he went to pick it up he didn’t have it today,” Baffert said. “That’s why I like to come back in two weeks.” 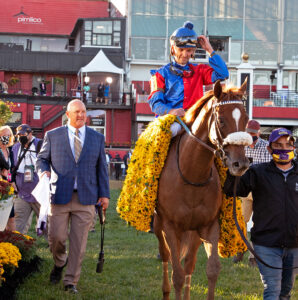 McPeek said the Breeders’ Cup Distaff (G1) for fillies and mares at Keeneland Nov. 7 is the likely target for Swiss Skydiver but didn’t completely rule out the Breeder’s Cup Classic (G1) the same day.

Winning Trainer Kenny McPeek (Swiss Skydiver) – (From NBC Broadcast) “I’m just proud of Robby. We had to call him in at the last minute. He did a great job. I’m really proud of him, her, [owner] Peter Callahan – I wish he was here. This is just a real honor to be around a horse like this. This is a special moment.”

“It was a genius move by Robby coming up the fence. He saw a hole and went right at it. It felt like she took him there. If he waited, she would take him there. I think she should have won the Oaks too. Maybe if we stay inside, we win that one too, but it is what it is. She’s just really neat to be around. Robby and I have had a great week. We’ve been getting on her, walking her together, eating breakfast, lunch and dinner together. This is a lifetime experience for both of us and we hope we’re back.”

Winning Jockey Robby Albarado (Swiss Skydiver) – (From NBC broadcast) “I had an opportunity, a split second, to take advantage of the rail because Johnny was sitting off the fence there. I made a conscious decision on the backside. ‘It’s give or take now. Do I make that move now or do I wait to see if they come back to me?’ She’s been doing extremely well. Kenny’s been doing a great job. I’ve been around her all week. I figure she knows where she’s at, she’s in her surroundings. I said let me try and make this Jerry Bailey move and win.”

Bob Baffert (trainer, Authentic, 2nd; Thousand Words, 8th) – “I was hoping he was on the lead. But he got beat. He had the whole stretch to get by her. She ran a gallant race. He’s a free-running horse and likes to be on the lead. I saw he wasn’t on the lead and was struggling a little bit.”

“I thought I was going to be on the lead. [Jockey John Velazquez] said that it didn’t work out and he was rating him today. He doesn’t like rating. He wants to go fast.”

“That’s a good filly. He had every chance to get by her. He got beat. He just couldn’t get by her. She dug in. She’s tough.’

“We had to get the lead. He runs better on the lead. He likes to be out there running fast. When I saw 24 [seconds] that’s really slow for him. That’s how he won the Derby, get him running. But he said when he went to pick it up he didn’t have it today. That’s why I like to come back in two weeks.”

(On Thousand Words) “He was right there in a good spot, but he’s a funny horse. He’s in and out.”

John Velazquez (jockey, Authentic, 2nd) – “We had a good start, no trouble at all. In the first turn we got by Art Collector. By the backstretch, I tried to open up, but he just stood there and Swiss Skydiver came to him. I tried to get him rolling again, but he just stayed with that other horse from the half-mile pole to the wire.”

Jose D’Angelo (trainer, Jesus’ Team, 3rd) – “I feel very excited and I’m proud of my team and their work with Jesus’ Team. He’s really improved every day. I am very sure that he is going to be a great horse in the United States. I’m very happy for the result in this race, the Preakness Stakes, one of the most important races for 3-year-olds in this amazing country.”

“I don’t know really what our next race will be, but maybe the Breeders’ Cup, maybe go to Florida to prepare him for the Pegasus. The horse ran so good and he came back good to the barn.”

Jockey Jevian Toledo (Jesus’ Team, 3rd): “He ran big. He’s a really nice horse. I got a really nice trip, I can’t complain. He gave me everything he had. We had no excuse. The other two horses were just much the best, but he was running all the way to the wire. It’s exciting; third in the Preakness. He’s a nice horse, a beautiful horse. He tries all the time.”

Trainer Tommy Drury (Art Collector, 4th): “I thought he ran fine. He didn’t break quite as sharp as we hoped he would and that kind of had us playing catch-up a little bit. He was kind of in tight and it wasn’t the best trip; it’s not the trip we were hoping for. But we’ve got no excuse. The winner ran huge and we had our shot to get to them and just couldn’t do it.”

Brian Hernandez Jr. (Art Collector, 4th): “It wasn’t the trip we were hoping for. We were kind of pinned in between horses the whole way. They jumped early, they moved early and we tried to go with them and we just weren’t able to. They sprinted on from about the three and a half on, and they never came back to us. You’ve got to be proud of the horse. Just to get to this level and for him to be fourth today, it was a big effort off of eight weeks. It wasn’t an ideal deal coming into this race off eight weeks but it is what it is.”

Jockey Florent Geroux (Thousand Words, 8th): “I had a good trip. I broke on top and went right to the lead but at the half-mile [pole] I had no horse. The filly went outside of me and was the winner, but I was out of horse pretty much early on.”