LOUISVILLE, Ky. (Friday, Nov. 27, 2020) – Bodexpress, who made headlines as the riderless horse in the 2019 Preakness, is now a Grade I winner. The 4-year-old colt grabbed the lead with three-sixteenths of a mile to run and turned back a challenge from 8-5 favorite Code of Honor to win Friday’s 146th running of the $500,000 Clark Presented by Norton Healthcare (Grade I) at Churchill Downs by one length.

“This is a different horse than we saw last year during the Triple Crown campaign,” Delgado Jr. said. “He’s really matured. Turning for home I thought we had a really good shot. The horse deserves this most of all. I’m very happy for everyone involved but we are so happy for Bodexpress.”

Breaking from post position No. 8 in the full field of 14, Bodexpress was forwardly-placed throughout the race. Phantom Currency dictated the early pace (:23.39 and :47.94) and had a 1 ½-length advantage onBodexpress leaving the first turn into the backstretch run. Mr Freeze found room along the rail and raced alongside Bodexpress. The trio bunched around the far turn and the leader began to fade. Mr Freeze briefly took over after six furlongs in 1:12.77 but Bodexpress made a three-wide move, stuck a nose in front at the 3/16-pole and inched clear inside the final furlong. Code of Honor made a four-wide bid down the stretch but did not have enough to get by the winner. 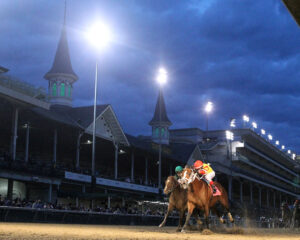 “This horse just showed so much run today,” Bejarano said. “I’m so proud of him. (Phantom Currency) was going so fast on the lead and we were able to sit a really good trip just behind him. He relaxed very nicely for me and turning for home I could feel I still had a lot of horse underneath me. He had a lot of energy in deep stretch when we needed it to hold off the rest of the horses. It’s very special winning a race like this returning to Kentucky to ride this year. This is my home and we’ve had a lot of success here in my career. This was very special.”

“We got into a good spot on the backstretch in between horses,” Velazquez said of Code of Honor. “We were chasing the speed of (Phantom Currency) and turning for home we didn’t have a lot of room. When I finally got a spot to run around the eighth pole, (Bodexpress) kept going and we weren’t able to catch him.”

This was the first stakes victory for Bodexpress, who entered the race off a dominating 11 ¼-length allowance win over 1 1/16 miles at Gulfstream Park West on Oct. 17. 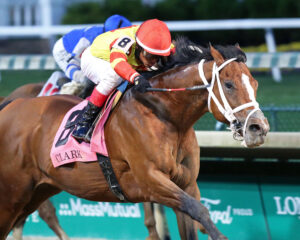 Bodexpress qualified to the 2019 Kentucky Derby (GI) as a maiden with a second place finish behindMaximum Security in that year’s $1 million Florida Derby (GI). He placed 13th in the Derby and, two weeks later, unseated jockey John Velazquez when he reared at the start of the Preakness. He galloped around the track far removed from the inner rail and became a social media sensation.

Next up for Bodexpress is a likely run in the $3 million Pegasus World Cup (GI) at Gulfstream on Jan. 23.

Bodexpress is son of Bodemeister out of the City Zip mare Pied a Terre and was bred by Martha Jane Mulholland.