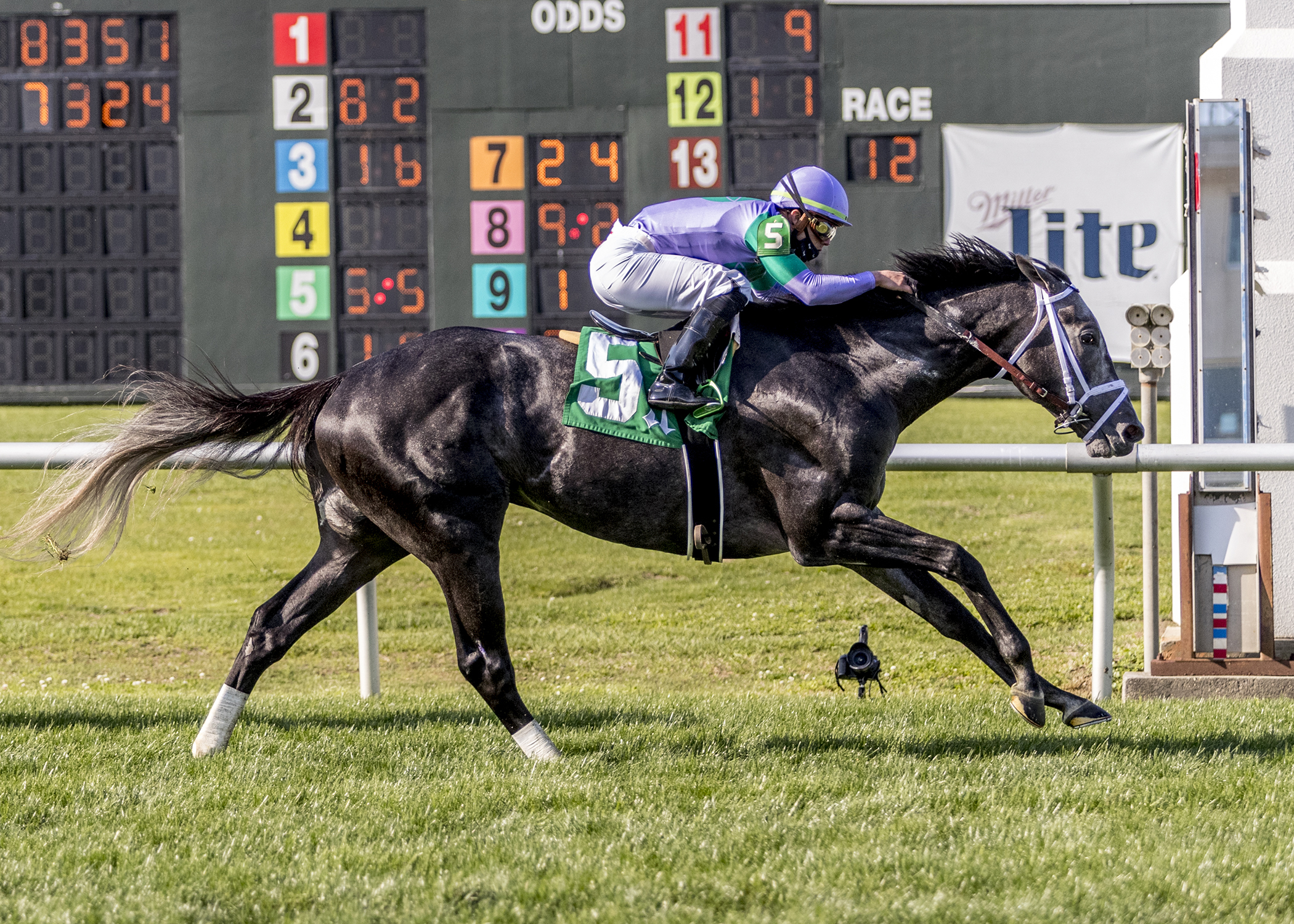 New Orleans (March 20, 2021) – In the days leading up to the $300,000 Muniz Memorial Classic Stakes (G2) at Fair Grounds Race Course & Slots, trainer Todd Pletcher remarked that his grade 1-winning charge Colonel Liam had been training so well on the dirt of late that he may entertain giving the gray colt another try on the main track at some point.

Considering the way the son of Liam’s Map keeps performing on the turf, however, the handicap ranks shouldn’t have to fret about him interloping anytime soon. Next up is expected to be Churchill Downs’ Grade 1 Old Forester Bourbon Turf Classic on the Kentucky Derby card.

Robert and Lawana Low’s Colonel Liam kept his star on the ascent Saturday when he edged clear of longshot Two Emmys in late stretch to capture the Muniz Memorial by 1 ½ lengths as the .70-1 favorite. It was his fourth win in five starts since switching to the grass.

On form, the 1 1/8-miles Muniz Memorial appeared to be Colonel Liam’s to lose as he was fresh off a victory in the $1 million Pegasus World Cup Turf Invitational Stakes (G1) at Gulfstream Park on January 23. The complexion of the Muniz was altered when multiple graded stakes winner and confirmed frontrunner Factor This was scratched Saturday morning, but the end result was as expected with Colonel Liam living up to his 3-5 betting favoritism after sitting off the early fractions.

“My job is not easy, but he makes it look easy,” said jockey Irad Ortiz, Jr., who was aboard Colonel Liam. “He was ready, he was 100 percent. He’s just so smart and he has a lot of class. You don’t see too many like that. I’m just happy I’m on him and hopefully he stays healthy.”

With pacesetter status up for grabs due to Factor This’ absence, 24-1 shot Two Emmys took up that mantle under jockey James Graham and went the opening quarter mile in 23.79 over a course rated good. Ortiz, meanwhile, kept Colonel Liam a bit closer to the pace than usual, rating the 4-year-old colt in fourth on the inside through a half in 49.08 before advancing up to third just behind Peace Achieved to his outside.

Two Emmys was still holding onto his advantage coming into the top of the stretch but, after angling off the rail on the far turn, Colonel Liam had dead aim at the leader in the lane and was able to draw clear in the final sixteenth.

“When Irad and I talked about it, we weren’t sure how much pace there was going to be, but the great thing about a horse like this is he is so versatile that if they go fast early, he can settle back and if they go slow, he can put himself in a good stalking position,” Pletcher said when reached by phone after the race. “He was on the bridle; he hadn’t run in a little while so he was maybe a touch fresh. He kind of pulled his way up there, but I think that was more a product of the slower second quarter. He always looked like he was in a good position. The horse who was second, he kicked on a bit and (Colonel Liam) had to work to get past him but I like the way he finished up and they looked like they were well clear of the third horse.”

Colonel Liam hit the wire in a final time of 1:48.33 over a turf course listed as “good” and the way he galloped out reinforces Pletcher’s belief that added distance down the road will not be an issue.

“The way he galloped out around the turn gives us encouragement that he’ll handle longer distances,” Pletcher said. “The way he continues to go out after the wire, I think that next start schedule is going to be 1 1/8 miles and then we can look at the Manhattan (in New York) after that at 1 ¼ miles. If he were to handle that, I think that puts everything else in play up to 1 ½ miles. He’s got such a lovely disposition; a great mind and he’s willing to relax and settle. It gives us a lot of opportunities.”

“He’s a cool little horse. I wasn’t expecting to be on the lead,” Graham said. “I ended up being placed there but I got him to relax, he was happy and comfortable. I tried to get away around the turn, I gave him a breather. I tried to steal a length or two on them but…the winner was the best horse.”

Colonel Liam made his first two starts on the dirt before finding his comfort zone on the lawn and now boasts a career mark of five wins from seven starts with $870,965 in earnings. Bred in Kentucky by Phillips Racing Partnership, he was purchased by the Lows for $1.2 million at the 2019 OBS April 2-Year-Olds in Training sale.

“He may be the best (we’ve had),” Robert Low said. “We think this horse has a great future and Irad gave him an excellent ride today. We couldn’t be happier.”

Summer in Saratoga called upon her fresh legs to get her 5-year-year old campaign off to an auspicious start when she angled out and mounted a 4-wide rally in the lane to capture the $150,000 Tom Benson Memorial by a neck over Dominga over the Stall-Wilson Turf Course at Fair Grounds Race Course & Slots. 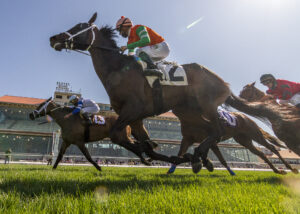 The 1 1/16-miles Tom Benson Memorial – named for the late owner of the New Orleans Saints and Pelicans – marked the first competitive outing for Summer in Saratoga since winning an allowance optional claiming test at Kentucky Downs September 30. The bay daughter of Hard Spun had signaled to trainer Joe Sharp in the mornings that she was ready to get back to business, a tout she made good on when she surged up under jockey Irad Ortiz, Jr. following a ground-saving trip to edge Dominga and notch her third win in her last four starts.

“Hats off to (owner) Highlander Training Center. We sent her there for a little freshening after Keeneland and they did a great job of getting her ready for us and sending her back in good order,” Sharp said. “This filly just keeps getting better and better. They did the right thing giving her a little break when the Churchill turf shut down last year and I think she’s really going pay dividends this year as a result of that.

“Obviously it’s nice to have a prep but the filly was giving us all the signs she was ready especially in her last couple works,” Sharp continued. “A filly like that with the muscle memory, when they show you they’re ready they can usually run to a top performance off a layoff like that. The professionalism she showed today has us pretty excited as far what you do with her moving forward.”

Sent off at 9.10-1 odds in the field-of-12, Summer of Saratoga broke from the far outside but was able to maneuver in for a clear spot along the rail going by the stands for the first time with 55.40-1 longshot and stablemate His Glory setting the early pace. Ortiz kept Summer in Saratoga off the pace in eighth as His Glory cut fractions of 23.71 and 47.68 before they started to pick their way through the pack with about three furlongs to run.

Coming into the far turn, Ortiz was able to start moving Summer in Saratoga off her inside path but still had a wall of contenders in their wake. Once they reached mid-stretch, the duo angled out further and found the daylight they needed as they went by Winning Envelope to their inside en route to stopping the teletimer in 1:42.15 over a course rated “good.”

Dominga, who had not been worse than second in three prior starts at Fair Grounds, kept her consistent local streak alive as she held for place money with Winning Envelope third. Dalika (GER), the 5-2 favorite off a pair of stakes wins earlier in the meet, finished ninth.

“Huge effort,” trainer Brad Cox said of Dominga. “She was a little closer to the pace than expected – I liked it – she was able to put herself in a good spot. (Jockey Florent Geroux) did a good job settling off the horse up the backside. She dug in and galloped out well. I think she’s a filly who will get a lot of this and move forward, maybe even further to marathon distance type things we’ll look for. Her pedigree suggests the older (she gets), the better.”

Bred in Kentucky by My Meadowview LLC, Summer in Saratoga improves her record to four wins from 11 startsand $270,092 in earnings.