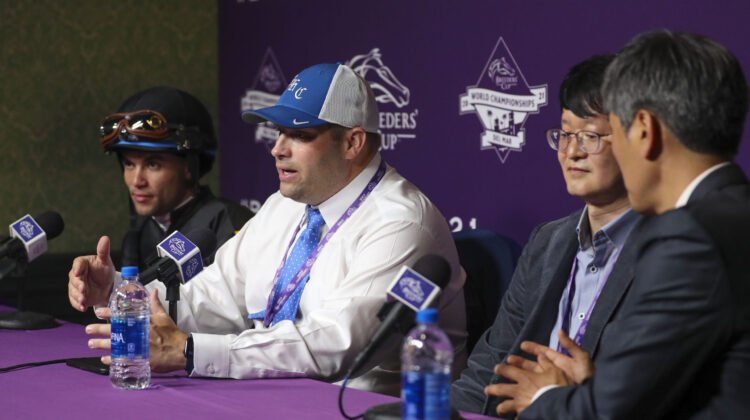 The Turf Publicists of America (TPA) announced today that the 2021Big Sport of Turfdom award, which recognizes a person or group of people who enhances coverage of Thoroughbred racing through cooperation with media and racing publicists, will be presented to Churchill Downs-based trainer Brad Cox.

A Louisville, Native, Cox, grew up a few blocks from Churchill Downs and his father began taking him to the track when he was four or five.  He got his first job as a hot walker at 13, then worked as a groom for trainers Burt Kessinger and Jimmy Baker. He was an assistant trainer to Dallas Stewart for five years before starting his own stable at age 24.

Cox’s star has risen in recent years and the 41-year-old trainer was voted Eclipse Award winner as Outstanding Trainer for 2020, and as an encore won the 2021 Belmont Stakes (G1) with Essential Quality and the 2021 Breeders’ Cup Classic (G1) with Knicks Go, and as of this writing he leads all North American trainers in earnings with nearly $30 million in purses. He also would wind up winning the Kentucky Derby with Mandaloun should first-place finisher Medina Spirit be disqualified for a medication violation.

“What a year it’s been for Brad Cox. Whenever there was a big race to cover, it was odds-on that a horse from his barn would be one to talk about,” TPA President Wendy Davis said. “Brad’s generosity with his time, allowing his story, as well as his horses’ stories to be shared with the fans of our sport is the epitome of what the award stands for. We congratulate Brad on his incredible 2021 racing season that includes the victory by Knicks Go in the Breeders’ Cup Classic as well as being chosen by the members of the Turf Publicists of America as the Big Sport of Turfdom.”

The Big Sport of Turfdom award will be presented to Cox at the University of Arizona Race Track Industry Program’s annual awards luncheon on Dec. 7. The luncheon is part of the 2021 Symposium on Racing & Gaming at Loews Ventana Canyon Resort in Tucson, Ariz. As there was no Symposium held in 2020 because of COVID-19 restrictions, 2020 Big Sport winner, trainer Tom Amoss, will he honored at the same time

“I am honored to receive this award,” Cox said. “It is especially meaningful given the list of previous winners.”

The luncheon is included in registration fees for the symposium. Additional information about the luncheon may be obtained by contacting TPA Secretary/Treasurer Dave Zenner.

The Big Sport of Turfdom has been presented annually since 1966. This is the first time Cox has won the award.

A complete list of past Big Sport of Turfdom winners can be found online at http://www.turfpublicists.com/awards.html.