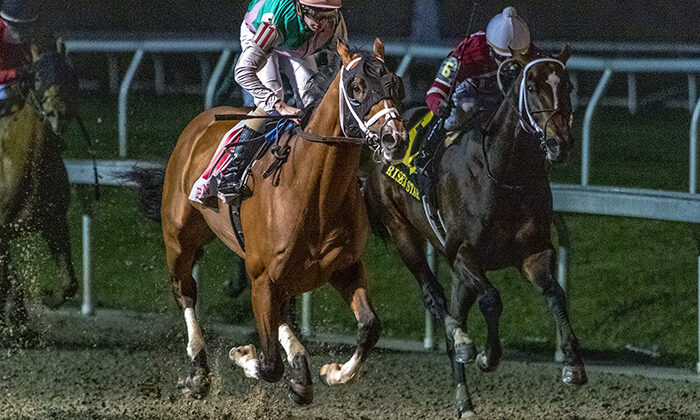 NEW ORLEANS (Monday, Jan. 10, 2022) — The beaten favorite in last year’s Lecomte (G3), Juddmonte’s Kentucky Derby runner-up Mandaloun is set to take the stage again one year later at Fair Grounds Race Course & Slots, this time to make his 4-year-old debut in the $150,000 Louisiana on “Road to the Derby Day” on Saturday January 22.

“That’s our plan,” trainer Brad Cox said. “He’s really come to hand quick. He looks amazing. Happy with the way his weight is and how he’s taken shape. Excited about getting him back going this year and we will see how things go on January 22.”

Mandaloun shook off his third-place finish in the Lecomte by winning the Risen Star (G2) in his very next start. He was a virtual no show in the Twinspires.com Louisiana Derby (G2) but bounced back with a huge second in the Kentucky Derby (G1) presented by Woodford Reserve. He later won the Pegasus at Monmouth in advance of a close defeat in the July 17 Haskell (G1), the final start of his sophomore campaign.

“He needed time off,” Cox said. “He made that decision easy. We stopped on him and gave him time. For horses to progress, whether it be from (age) 2 to 3 or 3 to 4, they need a break. He’s received his break and he’s come back.”

The son of Into Mischief returned to the work tab on November 28 at Churchill, and he posted his seventh breeze since returning to training on Sunday at Fair Grounds, stopping the timer in 1:13 1/5 for six furlongs.

“Listen, I’m not going to tell you that he’s working better than ever because he’s always a very, very good work horse to begin with,” Cox said. “I think anybody that watched him train up to the Kentucky Derby could believe the way he ran (second at 26-1), the way he was training. He’s definitely working as well as he was leading up to the Derby, or the Haskell, so we’re in a good spot with him. I think this is a race that makes a lot of sense as far as getting back racing and seeing how it goes.”

Mandaloun could ultimately be declared the Kentucky Derby winner should first-place finisher Medina Spirit be disqualified for a medication infraction.

“They’ve raced against one another, let’s see, one, two, three, four maybe five times, I don’t know, it’s a lot,” Cox said. “They’ve mixed it up and made it exciting. Rivalries are good for racing. Midnight Bourbon is a very good horse. He’s going to be very tough to beat in that he’s not coming in off much of a layoff and we are. He might be a little tighter. He’s a big beautiful horse. It will be an exciting match-up. We’re looking forward to it.”

Should he perform well, the Mandaloun camp could have designs on the $20 million Saudi Cup on February 26.

“The Saudi Cup is something we’d look at,” Cox said. “Ultimately it will come down to the Juddmonte team. They will make the final determination. We work extremely well together. They’ll play it the way they always do. Horse comes first. It the horse is doing well and it makes sense, that’s definitely something we would look at doing. That was sort of our plan when we got back started in the fall. One step at a time.”

After running third with the favored Mandaloun last year, Cox has another talented project expected for the 2022 edition of the Lecomte.

Disqualified after crossing the line first in his career debut at Churchill, his greenness got him beat in Louisville six weeks later, this time on the square. Stretched out around two turns for the first time on December 26 at Fair Grounds, he took a clear advantage in the stretch, but nearly coughed it up late.

“He’s obviously raced erratically in all three starts down the lane,” Cox said. “I thought he was very impressive here last time up until the last little bit. It’s all mental with him. It’s nothing we can really fix with him in the mornings. He’s a colt that has always been a little tough to handle. He’s not straightforward. He’s the kind of horse who requires a good hand. He’s very immature. I think the talent is there, but he’s got to take a step forward mentally, and I think he will. He just needs to race and get some miles underneath him in the afternoons. I think he’s going to be a player in the 3-year-old division.”