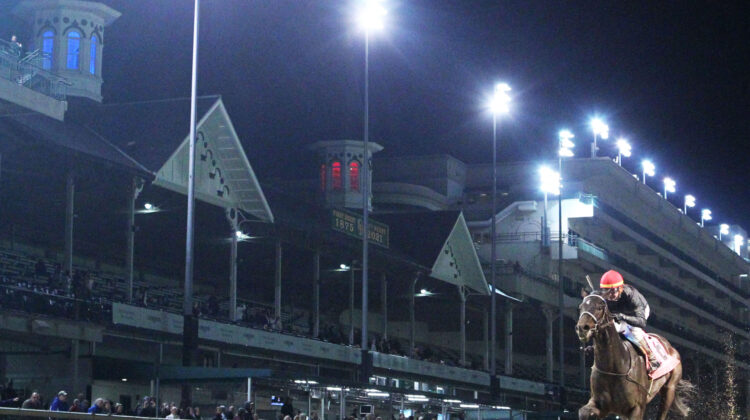 A major steppingstone for the $3 million Kentucky Derby (G1) Presented by Woodford Reserve to be run May 7 at Churchill Downs, the Toyota Blue Grass offers 170 points toward qualification to this year’s Derby on a 100-40-20-10 scale to the first- through fourth-place finishers. The Derby is limited to the top 20 point earners that pass the entry box.

The Toyota Blue Grass will go as the ninth race on Saturday’s 11-race program with a 5:10 p.m. ET post time. First post time for the card that features five graded stakes is 12:30 p.m.

In his lone start of 2022, Smile Happy finished second behind leading Kentucky Derby contender Epicenter in the Risen Star (G2) Presented by Lamarque Ford at Fair Grounds on Feb. 19. Corey Lanerie, who has been aboard Smile Happy in his past two races, has the mount Saturday and will break from post position 10.

Seeking to follow on the heels of Essential Quality, who completed a Claiborne Breeders’ Futurity-Toyota Blue Grass double last year, Rattle N Roll finished sixth in the Fountain of Youth (G2) at Gulfstream Park on March 5 and fourth in the March 26 Louisiana Derby (G2). Brian Hernandez Jr., who won this race in 2020 with Art Collector, has the mount and will break from post nine.

The second choice at 5-2 on Mike Battaglia’s morning line is Jeff Drown’s Zandon.

Trained by Chad Brown and to be ridden by Flavien Prat, Zandon will be making his first start since finishing third in the Risen Star in his 2022 debut, a half-length back of Smile Happy. Zandon closed 2021 with a narrow defeat in the Remsen (G2). Zandon will break from post four.

Brown will be seeking his second Toyota Blue Grass victory, having scored with Good Magic in 2018.

Third choice on the morning line at 5-1 is WinStar Farm and Siena Farm’s Emmanuel.

Trained by three-time Toyota Blue Grass winner Todd Pletcher, Emmanuel won his first two starts and in his most recent outing finished fourth in the Fountain of Youth (G2) on March 5.

Luis Saez has the mount and seeks to join Edgar Prado (2002-2003) as the most recent rider to win the Toyota Blue Grass in consecutive years. Saez won last year on Essential Quality and also won the 2016 renewal on Brody’s Cause. s

Emmanuel will break from post six as one of two Pletcher-trained runners in the race.

Also entered Wednesday was Repole Stable and St. Elias Stable’s Commandperformance (12-1), who will break from post one under Irad Ortiz Jr. Commandperformance will attempt to join Irap (2017) as the only maiden to win the Toyota Blue Grass.

Two other trainers will be attempting to add to their Toyota Blue Grass victory total.

Two-time Toyota Blue Grass winner D. Wayne Lukas will saddle Julie Gilbert and Aaron Sones’ Ethereal Road (15-1), who finished second in the Rebel (G2) on Feb. 26 at Oaklawn Park, an effort that was preceded by a dazzling, last-to-first maiden score on Jan. 29.

Lukas, who won this race in 1987 with War and in 2000 with High Yield, will give Luis Contreras a leg up on Ethereal Road, who will break from post position eight.

Mike Maker, who won the race in 2010 with Stately Victor, will saddle Three Diamonds Farm’s Grantham (15-1). Runner-up in the Lambholm South Tampa Bay Derby (G2) in his most recent start, Grantham will exit post position 12 and be ridden by Tyler Gaffalione.