Whitmore is maybe two weeks away from his first work of the year, with the $150,000 Hot Springs Stakes March 9 at Oaklawn being targeted as the gelding’s comeback spot, co-owner/trainer Ron Moquett of Hot Springs said Friday morning. 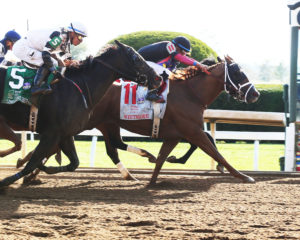 Freshened in Kentucky following a runner-up finish in the $2 million Breeders’ Cup Sprint (G1) Nov. 3 at Churchill Downs, Whitmore has been galloping since his return to Hot Springs early last month, Moquett said.

Moquett said his stakes-winning 3-year-old, Frosted Ice, is “doing well” and will return to the work tab about the time Whitmore does. Frosted Ice has won 2 of 3 starts, including the $150,000 Bertram F. Bongard Stakes Sept. 21 at Belmont Park to close his 2-year-old season.

“We’ll just see if he’s ready enough to do something before the Rebel,” Moquett said.

Moquett said multiple stakes-placed Petrov is about 10 days away from his first breeze of the year. Moquett said Petrov will target an allowance race for his comeback spot, with the inaugural $200,000 Oaklawn Mile for older horses May 3 his major spring objective.

“It doesn’t take very much to get him fit,” Moquett said.

Barkley, 29, has already checked off one box this year at Oaklawn, winning last Sunday’s fifth race with Strolling ($8.20). It was Barkley’s first career victory in Hot Springs.

“It was nice to get that one,” Barkley said. “Won’t get shut out this year.”

Barkley, the son of trainer Jeff Barkley, wintered at Oaklawn for the first time last year and was blanked (0 for 16). He entered the 2018 Oaklawn meeting with one career victory – October 2017 at Keeneland – but finished the year with 11 victories overall.

“Went from a bad six months to like 11 for my last 35,” Barkley said. “Just getting my feet under me and being able to get a few more clients and different stock. When you only have a few, maybe you don’t spot them exactly right. You’re a little less aggressive because you’re afraid to lose them. But went you’ve got 10 to 12, you can spot them a little more aggressively. Instead of being 15-1, you’re 5-1 with a chance.”

Barkley said he began the 2018 Oaklawn meeting with five horses. He now has around 15 and would like to continue to build his stable.

Tonbo, a recent private purchase by Tri-Star, was a three-time winner for Barkley last year before he lost the gelding through a $5,000 claim in September at Churchill Downs. Tonbo is entered in Saturday’s third race.

A graduate of the University of Louisville’s equine business program, Barkley was tutored by several high-profile trainers before striking out on his own, including Hall of Famer Nick Zito, Joe Sharp and Wesley Ward.

“I’ve done the Classic training with Zito, the everything training with Joe and the 2-year-olds with Wesley,” Barkley said. “So, we’ve got a good base. I feel like anything they throw at me, I can handle.”

Arch Avenue, a winner of 2 of her last 3 starts, is 10-1 on the morning line for the Martha Washington.

Bravazo returned to his Oaklawn base Monday morning after finishing fourth in the $9 million Pegasus World Cup Invitational (G1) Saturday at Gulfstream Park.

“Twenty-something hour van ride, we’ll give him an extra day or so,” Lukas said. “No reason to get in a hurry.”

Bravazo earned $700,000 Saturday, pushing his career bankroll to $2,003,528. He opened his busy 2018 campaign (11 starts at eight tracks) with an allowance victory at Oaklawn before winning the $400,000 Risen Star Stakes (G2) at Fair Grounds in his next start. Bravazo also ran second in the Preakness (G1) and Haskell Invitational (G1).

“I think he merits it,” Lukas said of the Dubai World Cup. “He deserves a chance. Again, new surface, different track, configuration, new field. You never know. But $12 million is certainly a strong incentive.”

Lukas said he’s never been to the UAE.