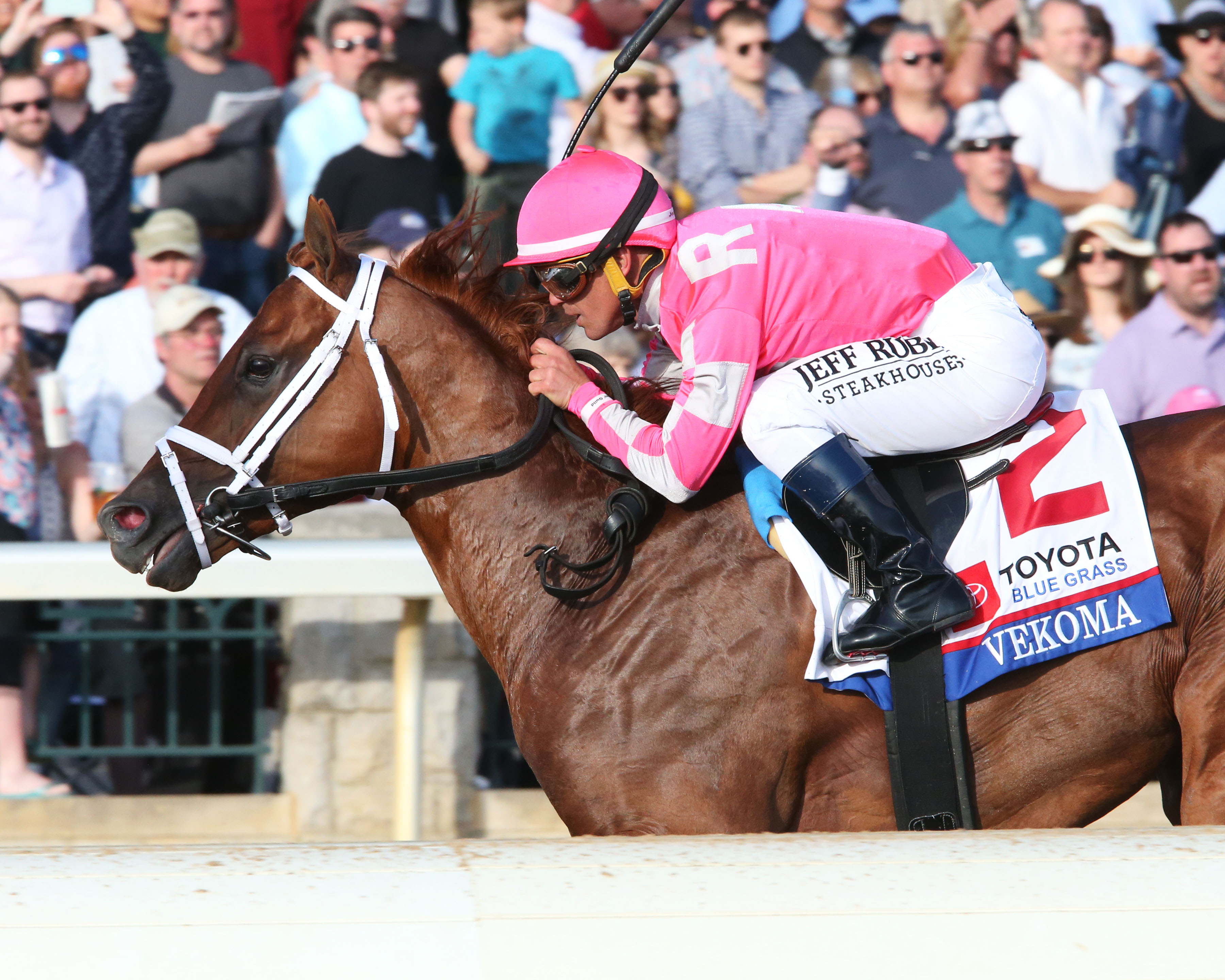 LEXINGTON, KY (April 6, 2019) – Gatsas Stable and R.A. Hill Stable’s Vekoma took command from Somelikeithotbrown in the middle of the far turn and went on to post a 3½-length victory over Win Win Win in the 95th running of the $1 million Toyota Blue Grass (G2) for 3-year-olds before a crowd of 34,775, a record for an opening Saturday of a Keeneland meet. 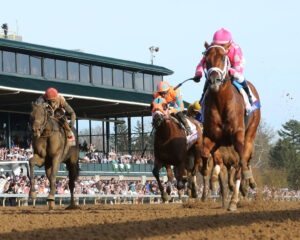 “The last start, there was a pretty fast pace, and I told (Fountain of Youth jockey) Manny (Franco) to be conservative the first half-mile,” said trainer George Weaver, who grew up in Louisville the son of a racing fan who took his boy to Keeneland for Blue Grass Day every year, back when the stakes was on a Thursday nine days before the Kentucky Derby. “I talked to Javier (Castellano) before this race, and told him I wasn’t so worried about that. I wanted to know if he can go the distance. He’s got great tactical speed, (which) put him in a spot going into the first turn and just ride him natural.

“He’s so talented and he’s done things in the morning. I’ve really never had a colt like this in all the time I’ve trained. Nothing would surprise me.  If he comes out of it well, we’ll go to Louisville and see what happens.” 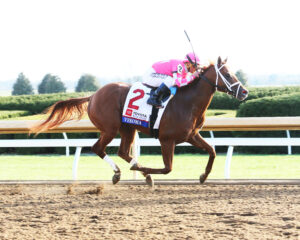 Vekoma covered the 1 1/8 miles on a fast main track in 1:50.93. It was the first victory in the race for Weaver and Castellano. Vekoma became first horse since Coaltown in 1948 to win the race in only his fourth career start.

“I’ve been learning about the horse. I’ve been watching his races. I really fell in love with the horse last week when I worked the horse.  I was very optimistic about winning the race today.”

The victory was worth 100 points on the road to the $3 million Kentucky Derby Presented by Woodford Reserve (G1), to be run May 4 at Churchill Downs, and gives Vekoma a total of 110, second on the leaderboard. That is more than enough to earn a spot in the starting gate, which is limited to the top 20 point earners and invitees that pass the entry box.

“I didn’t win today, but I am so proud of this horse,” jockey Irad Ortiz Jr. said of Win Win Win. “He ran a great race. I got into a little traffic early and when I finally got him clear, I asked him to run, and he started to really turn it on. I think he can keep improving for the Derby. He’s a really nice horse.”

“I don’t think we necessarily have to talk about distance being a limitation for him anymore,” said Win Win Win’s trainer, Michael Trombetta. “This was only his second start around two turns and he’s really starting to figure it out. Maybe the 1 1/4 miles in the Derby will be perfect for him.”

Somelikeithotbrown took the early lead out of post position one with Vekoma closely tracking in second through fractions of :23.26, :47.03 and 1:11.55. On the far turn, Castellano sent Vekoma after the leader and, entering the stretch, quickly opened up.

Signalman moved into second at midstretch only to have Win Win Win nip him at the wire for the runner-up spot.

A Keeneland September Yearling Sale purchase, Vekoma is a Kentucky-bred son of Candy Ride (ARG) out of the Speightstown mare Mona de Momma. The $600,000 winner’s check boosted his earnings to $788,850 with a record of 4-3-0-1.

“We’ve been fortunate enough to work out some really good trips today; hopefully it’s all a building block on the first Saturday in May,” Hernandez said. “It looks like we have enough points now to get in, so we’re excited about it. The Lewises (co-owners) are really excited since this will be their first Derby, and it looks like we’re going in there with a live horse. This will be his third race already in his 3-year-old career so you’ve gotta be excited. The race track has been playing speedy all day, and horses that have been close have been holding on, so we had to use our horse a little more than he may like but he still held on for a good third.”

It was another three-quarters of a length back to Turfway Park’s Jeff Ruby Steaks winner Somelikeithotbrown in fourth with Chess Chief, So Alive, Sir Winston, Admire, Moonster, Lucky Lee, Market King, Aquadini, Dream Maker and Parsimony following in order.

“If you take into consideration the way the track’s been playing all day, I thought it (the pace) was pretty fair,” said Tyler Gaffalione, rider of Somelikeithotbrown. “In the filly race going a mile and a sixteenth (the Central Bank Ashland [G1]), they went :46 for the half. Speed held there. Speed’s been holding all day, so we tried to be a little aggressive. Just wasn’t our day.”