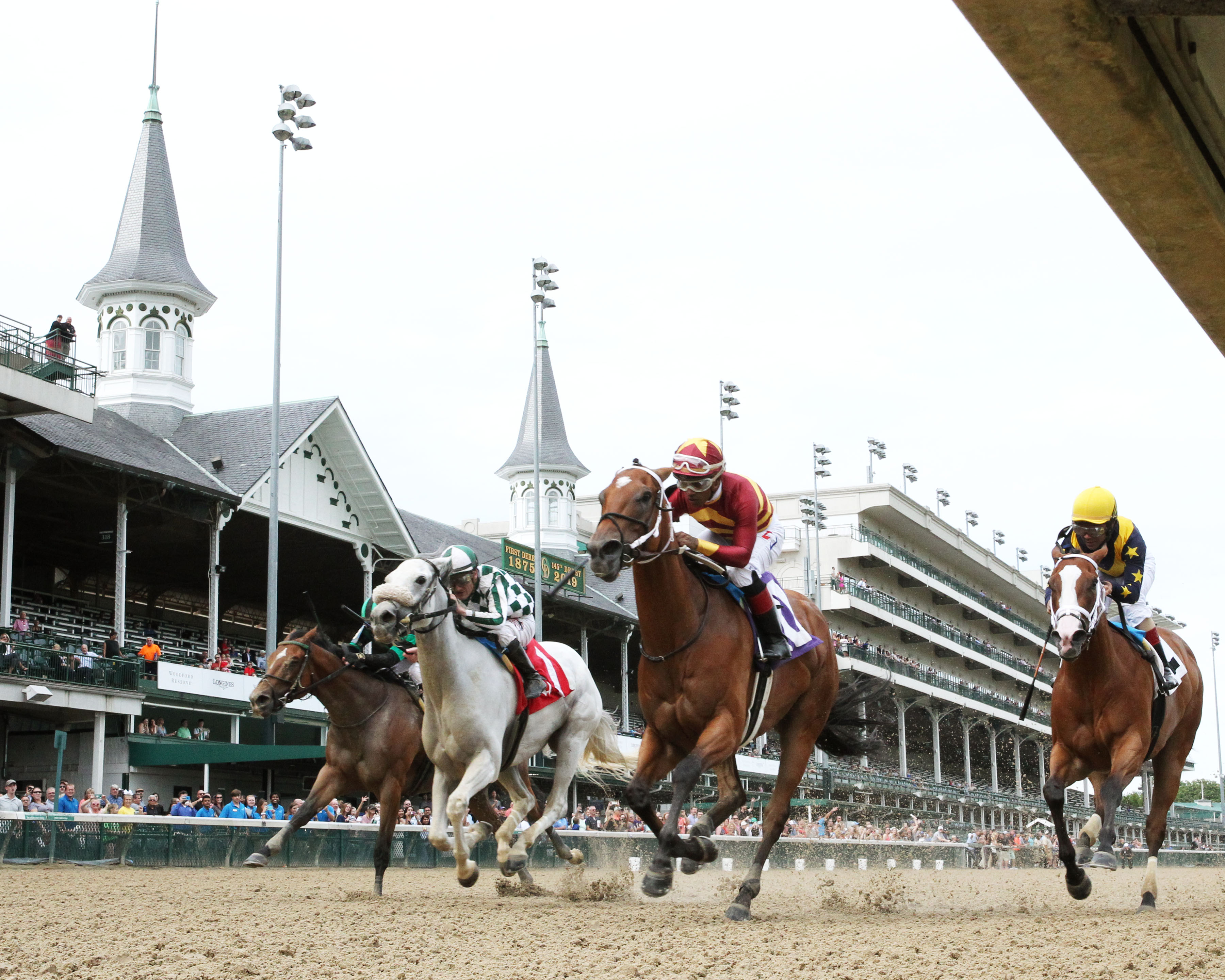 LOUISVILLE, Ky. (Saturday, June 22, 2019)–Mia Mischief, winner of the $500,000 Humana Distaff (Grade I) on Kentucky Derby Day, ran shoulder-to-shoulder with swift pace-setter Covfefe and put away the 2-5 favorite inside the final 50 yards to win Saturday’s 10th running of the $120,100 Roxelana Overnight Stakes at Churchill Downs by three-quarters of a length. 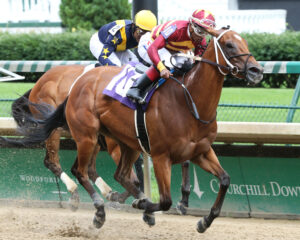 Late-closing Awestruck narrowly picked up second by a head over a tiringCovfefe, the lone 3-year-old in the field of five sprinting fillies and mares.

The Roxelana capped a big day for Hall of Fame conditioner Steve Asmussen, who became only the third trainer to win 700 races at historic Churchill Downs one race earlier when 5-year-old gelding Rocky Tough rallied to win the ninth race.

“We’ve been blessed with many great horses to get us there,”Asmussensaid. 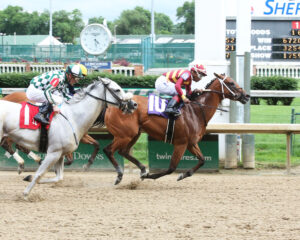 … and then held off the late-running Awestruck. Coady Photography photos

Covfefe, who set a blistering six-furlong track record at Pimlico(1:07.70) while easily winning the $150,000 Miss Preakness five weeks ago, hesitated slightly when the starting gate opened from post position No. 2 but she quickly took over to set a pressured pace of :21.38 for the first quarter mile with Classy Act and Mia Mischief a half-length back to her outside.

Classy Act gave way around the turn and the two favorites matched strides as they crossed the half-mile pole in a fast :44.41 and five-eighths in :56.48. In a long and thrilling stretch drive, the elder Mia Mischief put her nose in front within the final furlong and wore down Covfefeas Awestruck rallied late to pick up the place position.

“(Mia Mischief) is such a nice filly and we beat a very nice filly in Covfefe today,” Santana said. “Going around the turn, (Covfefe) kicked clear a little bit and got me a little worried. Mia is such class and just kept digging in for more.”

The triumph was worth $74,120 and boosted Mia Mischief’s bankroll to $957,540 with a record of 15-7-6-0. In her previous start, she scored an 11-1 upset in the seven-furlong Humana Distaff when she defeated favorite Marley’s Freedom by 1 ¾ lengths. Her 3-year-old campaign included a victory in the Eight Belles (GII) at Churchill Downs and a narrow runner-up effort in the Test (GI) at Saratoga.

“It was very special to get this filly back to the winner’s circle and get ready for bigger races down the road,”Asmussen said.

“We went really fast and she got pressure the entire race,”Bridgmohan said of Covfefe. “We just got beat today.”

Said Leparoux: “We ran a great race. We let the horses do their thing on the lead and were able to close ground late to run a really solid second.”

Mia Mischief is a daughter of Into Mischief out of the Speightstown mare Greer Lynn and was bred in Kentucky by Spendthrift Farm LLC.

Asmussen, who was inducted into the National Museum of Racing Hall of Fame in 2016, joined Dale Romans (728) and Bill Mott (715) in a very select group to reach the 700-win milestone at Churchill Downs.

Asmussen has won a record 20 Churchill Downs training titles and is poised to collect No. 21. Rocky Tough and Mia Mischief were his 24th and 25th wins at the 38-day Spring Meet, which gave him a 10-win advantage over Eddie Kenneally. Closing day is next Saturday.

Overall, Asmussen has won more than 8,400 races, which is second behind the horse racing’s all-time leader Dale Baird, who collected 9,445 wins.