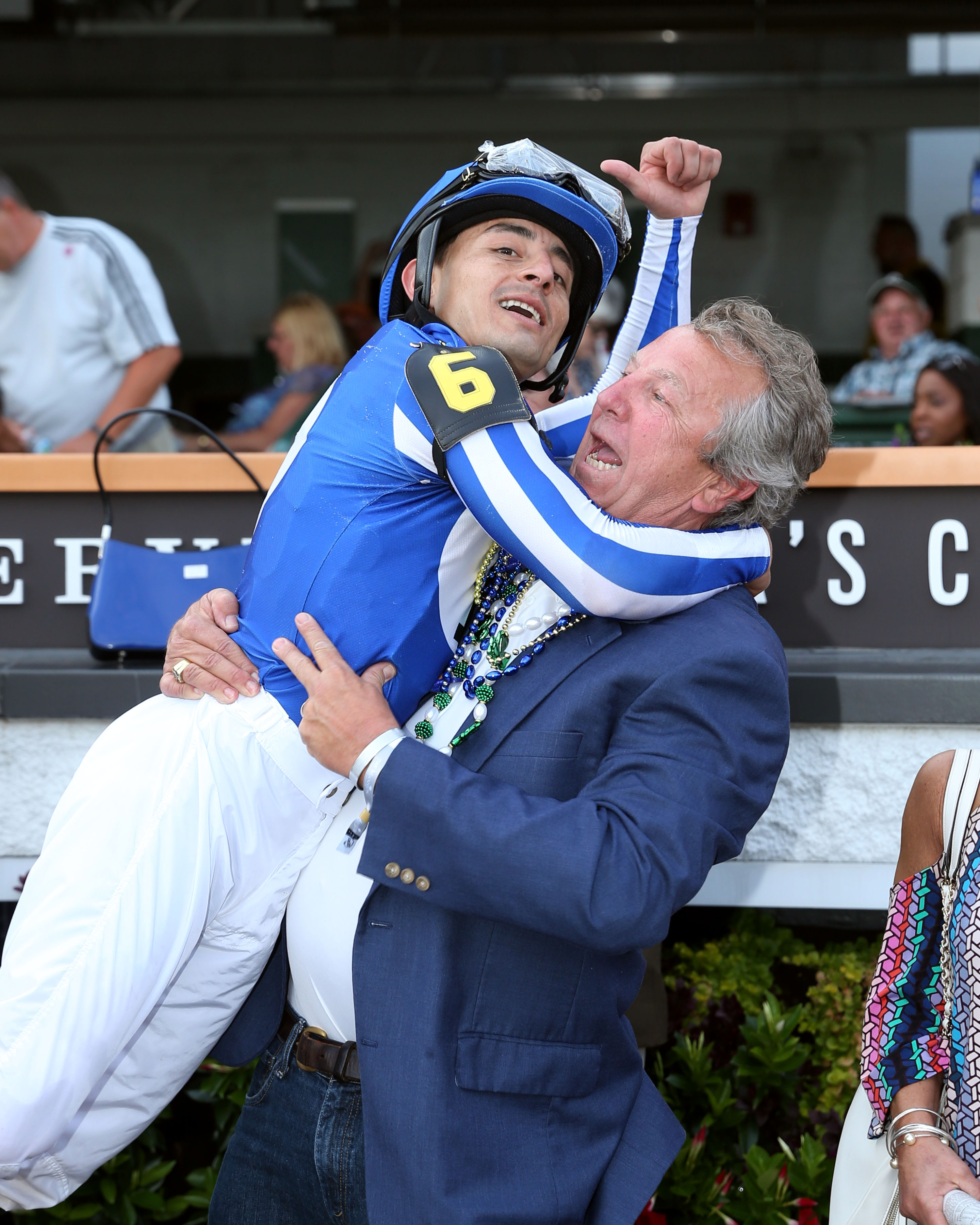 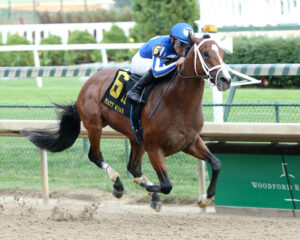 SHELBYVILLE, Ind.; July 8, 2019 — Allied Racing’s Mr. Money, who off a pair of Grade 3 stakes victories at Churchill Downs stamped himself as one of the fastest and most-improved 3-year-olds in the country, is headed to Saturday night’s $500,000 Indiana Derby at Indiana Grand. Regular rider Gabriel Saez has the mount.

Trainer Bret Calhoun had debated running Mr. Money, winner of the Pat Day Mile and Matt Winn in his past two starts, in Monmouth Park’s Grade 1 Haskell Invitational but couldn’t find suitable transportation to New Jersey in the summer heat.
“You’ve got a race pretty close to home for us, two hours away at Indiana Downs,” Calhoun said Monday morning. “It’s a nice purse, $500,000. We think it’s the least-stressful shipping situation for him. Our goal all along has been to keep this horse fresh for as long on the 3-year-old campaign as we can.”
Owner Chester Thomas, the Madisonville, Ky., entrepreneur who campaigns as Allied Racing, left the decision to Calhoun where to run, but the owner clearly is pleased to be in Indiana’s biggest horse race.
“That was the plan all along,” Thomas said. “We set out the path after the Pat Day Mile. There might have been a little temptation to go to Monmouth. But it’s a long ship. After weighing all the options, Bret concluded that he wanted to go to the Indiana Derby, and I was 100 percent with him and in agreement with the entire thought process. We’re looking forward to being up at Indiana Grand.”
Calhoun said Mr. Money’s earlier races were not a fair test as to how far the colt wants to run and that he’s a different horse now, as shown by his 5 1/4-length victory in the Pat Day Mile on the Kentucky Derby undercard and 6 1/2-length romp in the June 15 Matt Winn. It was a big turn-around from when Mr. Money was seventh in the Fair Grounds’ Grade 2 Risen Star in his first start at age 3 and then a well-beaten fifth in the 1 1/8-mile Louisiana Derby.
“No doubt about it,” Calhoun said. “We got off course this winter, it’s well-documented. He got sick for (and missed) the first prep there and had a little issue, getting ‘cast’ in the stall before the next one. I thought he ran a creditable race in the Louisiana Derby. But that was almost like a prep race. He was just coming around at that time. He had a wide trip and we saw what happened after that. He came in for the Pat Day Mile and he’s really moved forward since.”
Calhoun and Thomas won the Louisiana Derby anyway with By My Standards, who came into the $1 million Kentucky Derby prep off of a maiden victory.
“Obviously it was a no-brainer” to not run in the Kentucky Derby, Calhoun said of Mr. Money. “He didn’t have the points and he couldn’t get in. But he was our Derby horse this winter. We ran him in the Breeders’ Cup Juvenile here last fall, and he ran a creditable fourth. We knew he liked Churchill. We freshened him, had a plan in place to get him to the Kentucky Derby. Then things just went wrong for us. Nothing bad. Just minor setbacks that kept us from getting right. Fortunately for us, along came another horse, By My Standards, to win the Louisiana Derby for us.”
Calhoun said that be it racing around one turn or two, Mr. Money “has just become a really good horse.
“I think the key to me was the last race, it was a moderate to slow pace, I thought, and he rated very kindly, laid off the leaders,” he said. “I thought that’s what he needed to do to move forward, to go longer distances. We know he’s fast at a one-turn mile, if you want to let him bounce away from there and let him run. But to get him to rate off a 24 (second) quarter-mile and 47-and-change half-mile, that’s what impressed me. He’s gotten smart enough and experienced enough to do that, and that opens a lot of doors.
“If he makes another move forward, maybe you start thinking Travers” at 1 1/4 miles Aug. 24 at Saratoga. “If he looks like a really solid horse, maybe you think West Virginia Derby and Pennsylvania Derby. There’s a lot of money left on the table out there, and we’re just trying to put him in the best spots we can to keep him winning. We’re trying to take our place in the right spot at the right time. We think he’s that (Grade 1) caliber horse. Right now we’re just steady building up and letting him take us there.”
Which, along with By My Standards, has taken Thomas to new vistas as an owner, the colts being his first graded-stakes winners.
“I’ve been at this now 10 years and to have a couple of nice horses and hopefully some more along the way, we feel extremely blessed and couldn’t be happier or more excited,” Thomas said. “We just hope it keeps going. The horse is doing well, and this probably will be a little better test than the Matt Winn, so we’ll see how we fare.
“It’s still a horse race. There will be some nice horses in there. You’ve still got to go out there and everything has to go right, get the right trip and the horse has to get the job done.”