LOUISVILLE, Ky. (Saturday, Nov. 9, 2019) – Mr Dumas ranged into contention on the final turn, grabbed the lead in the stretch and turned back a late challenge from 7-2 favorite Tracksmith to win Saturday’s 16th running of the $175,000 Commonwealth Turf (Grade III) at Churchill Downs by a half-length.

Down the backstretch in the early stages of the race Mr Dumas rated a few lengths back of pacesetter Spectacular Gem, who led the field of 11 3-year-olds through early quarter-mile splits of :23.79 and :48.61. As Louder Than Bombs challenged Tracksmith for the lead into the final turn after six furlongs in 1:13.13, Mr Dumas began to range into contention. He drew even with the leaders with three-sixteenths of a mile to run, surged to the front with a furlong to run and held a closing Tracksmith at bay after the favorite encountered traffic along the inside and had to swing out for a clear run in deep stretch.

“This horse has really developed into a special horse,” said Rocco, who collected his first graded stakes win since Kiss to Remember won the 2016 Chilukki (GII) at Churchill Downs. “I was fortunate enough to get a really good trip and was able to tuck in behind the speed and it came back my way. He really has taken well to the turf and I think there are some bigger things down the road for him.”

Mr Dumas is a son of Majesticperfection out of the More Than Ready mare Ready Love and was bred in Kentucky by RamspringFarm. The three-time winner returned $21.40, $10.60 and $6.60 as the 9-1 eighth betting choice in the competitive bunch. Tracksmith, with Brian Hernandez Jr. up, paid $4.60 and $3.20. Marquee Prince, ridden by Tyler Gaffalione, finished another 1 ¼ lengths back in third and paid $6.20 to show.

“He did everything right today except win,” said Hernandez of Tracksmith. “We sat in a great spot in the inside of the course with the better ground. I’m very proud of his effort and he was just second best to a nice horse.” 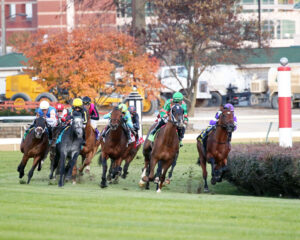 “At the beginning of his career I thought he was a two-turn dirt horse,” said winning trainer John Ortiz. “I was originally thinking a Kentucky Derby-type horse but then with the turf in his pedigree we tried him on the grass. When he ran at Kentucky Downs sprinting I never saw a horse with that fast of a closing kick. It’s been a very special journey so far and I’m very thankful for everyone involved.”

For Ortiz, it was his third career graded stakes win and second this year. In May, Honey Bunny won the $100,000 Winning Colors (GIII) at Churchill Downs.