LOUISVILLE, Ky. (Saturday, Nov. 16, 2019) – In the last 28 years, only three horses have won five career stakes races at Churchill Downs: 2012-13 Horse of the Year Wise Dan, crack sprinter Limousine Liberal and now Mr. Misunderstood, who added his name to the list after successfully defending his title in Saturday’s 42nd running of the $175,000 River City (Grade III).

Staton Flurry’s 5-year-old gelding improved his record to four wins in five starts on Churchill Downs’ Matt Winn Turf Course when he collared Cullum Road inside the final 100 yards to score a neck victory in the 1 1/8-mile race over “good” going in 1:53.31.

“He looks like he’s back to the old horse that he was,” Flurry said. “I think that was a question in everyone’s mind but we’re thrilled with today’s win. It’s always special when you get to win at Churchill Downs.”

Get Western led the field of 10 older horses through early quarter-mile splits of :24.90, :50.22 and 1:15.48 as Mr. Misunderstood was rated in sixth down the backstretch. When the field left the final turn, Get Western was tiring and it looked as if any one of seven runners could prevail, including 6-5 betting choice Admission Office, who swung wide under Jose Ortiz to get into contention. But Mr. Misunderstood, who had lost each of his previous four races this year, was able to split horses with a furlong to run and out-kick Cullum Road for the noteworthy triumph. Admission Office was another neck back in third and Bemma’s Boy was another neck behind in fourth.

Lascaux finished fifth and was followed by My Bariley, Space Mountain, Emmaus (IRE), Get Western and Blue Sky Kowboy.

“When a horse wins 50 percent of his starts you know he’s special,” Geroux said. “This horse just knows how to win and he tries hard every time. We bobbled a little bit coming out of the gate but I wasn’t too worried because I know how much he loves this course and how he can handle getting over it. It’s very special every time I get to ride this horse.” 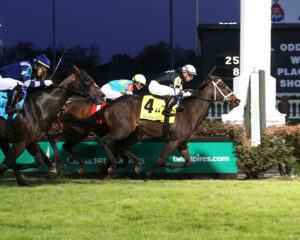 Mr. Misunderstood’s 5-year-old campaign began in late June and he finished third in his first two starts of the year. Then came a puzzling 10th place finish in the $241,500 Old Friends Stakes at Kentucky Downs, which was followed by a runner-up effort in the $100,000 Remington Green on Oklahoma. He was favored in each of his previous four starts this year.

“I think this year he came back a little behind the eight ball because of how late he got back to the races,” Geroux said. “The only bad race he’s had this year was at Kentucky Downs when he didn’t handle the surface at all.”

“We’re very proud of his effort today to bounce back and get into the winner’s circle,” Cox said. “He knows how to win and loves this track. Florent gave him a great trip this afternoon.”

Mr. Misunderstood, a son of Archarcharch out of the Afternoon Deelites mare Jodys Deelite, was bred in Kentucky by Athens Woods.