Florence, Ky., (March 26, 2020) – The last race on what became the last day of the Turfway Park 2020 winter/spring meet and the last at the existing facility put Wesley Ward alone at the top of the standings for his fourth leading trainer title at the Northern Kentucky track. Ward broke a tie with Mike Maker when Fitri Hay’s Zipaway went gate-to-wire in the eighth race Saturday, March 21, to give Ward his 19th win from 53 starters.

Zipaway also holds the distinction of being the last horse to win a race at Turfway’s existing facility. Originally scheduled to end March 28, the meet was cut short by three days in compliance with Governor Andrew Beshear’s directive to close non-essential businesses during the coronavirus outbreak. The 61-year-old grandstand is already being dismantled to make way for a new building on the site that will offer gaming in the form of historical racing machines as well as live Thoroughbred racing. 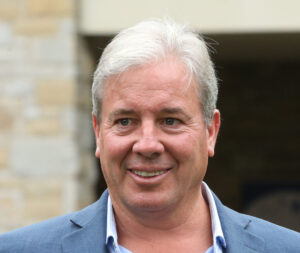 Ward’s tiebreaking win left Maker in second place with 18 wins from 70 starters. Cipriano Contreras, who tied with Ward for last year’s winter/spring meet, was third with 12 wins from 39 starters.

Among Ward’s wins were the Cincinnati Trophy Stakes with Karak and the listed John Battaglia Memorial Stakes with Invader. Maker won both of the biggest races of the meet, the Jeff Ruby Steaks (G3) with Field Pass and the Maxim Crane Works Bourbonette Oaks (listed) with Queen of God. Cipriano took home two stakes trophies, the Forego and the Kentucky Cup Classic, both with the rugged, 8-year-old gelding Nun the Less.

Jockey Albin Jimenez cruised to his seventh meet title at Turfway and his second straight, riding 47 winners from 217 mounts, including Invader in the Battaglia Memorial. Gerardo Corrales, riding his first meet at Turfway, was second with 38 winners from 149 mounts, including Karak in the Cincinnati Trophy. Apprentice Joseph Ramos, who began his riding career in 2019 at Hipódromo Camarero in Puerto Rico, ranked third with 26 wins from 191 mounts.