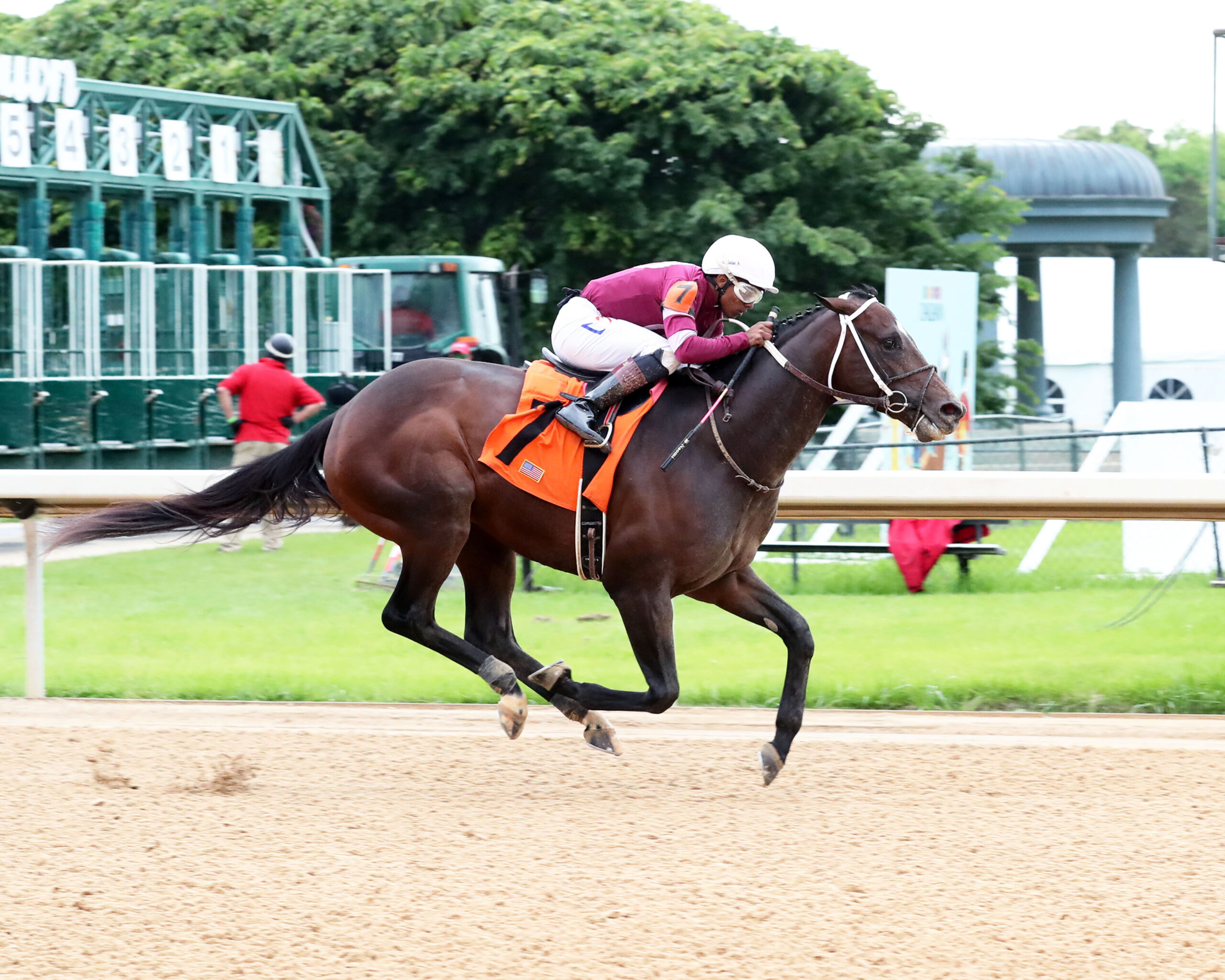 From today’s Belmont Stakes media notes from the New York Racing Association (Coady Photo pic of Pneumatic winning an Oaklawn Park allowance race)
Solid training in addition to changes made to the list of probable entrants for the Grade 1, $1 million Belmont Stakes has given the connections of graded stakes-placed Pneumatic enough confidence to send the sophomore son of Uncle Mo to the Empire State for the American Classic.
Trained by Hall of Famer Steve Asmussen, who saddled Creator to a 16-1 upset victory in the 2016 Belmont Stakes, Pneumatic was recently third in the Grade 3 Matt Winn at Churchill Downs, where he was forwardly placed along the rail, battled down the stretch with Ny Traffic but was passed up by Maxfield, who won under a hand ride.
Pneumatic last appeared on the work tab on Monday, June 8, where he drilled through five furlongs in 59.80 over the Churchill Downs main track.
Winchell Thoroughbreds’ racing and bloodstock manager David Fiske said Pneumatic had also been under consideration for the Grade 3 Ohio Derby, slated for June 27,
“A couple of things went into the decision. In addition to the fact that he’s been training really well and worked well last week, the changes that have been made in terms of defections and horses going to other races also are reasons why we’re going,” said Fiske. “It was either this or Ohio and the Belmont is an American classic. To have some Grade 1 black type in a Triple Crown race would be highly beneficial.”
A Kentucky homebred, Pneumatic is out of the stakes-placed Tapit broodmare Teardrop and comes from the same family as multiple-graded stakes winning millionaire Pyro and is a direct descendant of Carol’s Christmas, who has been a foundation mare for Winchell’s racing operations having produced Grade 1-winners Olympio and Cuvee as well as graded stakes-winner Call Now.
“It would be the cherry on top of the sundae,” Fiske said of a Belmont victory with the Winchell homebred. “He’s a direct descendant of Carol’s Christmas who might be the best $25,000 claim ever made.”
Pneumatic will be Winchell’s second starter in the Belmont Stakes. In 2018, Tenfold represented Winchell when running fifth to Triple Crown-winner Justify.
Prior to his graded stakes debut in the Matt Winn, the lightly-raced Pneumatic broke his maiden at first asking over the Oaklawn Park main track defeating next-out winners Skol Factor and Liam’s Pride en route to a victory against winners over the Hot Springs oval defeating stakes-winner Captain Bombastic by 2 ½ lengths.

Jockey Ricardo Santana, Jr. will have the mount aboard Pneumatic for the Belmont Stakes.