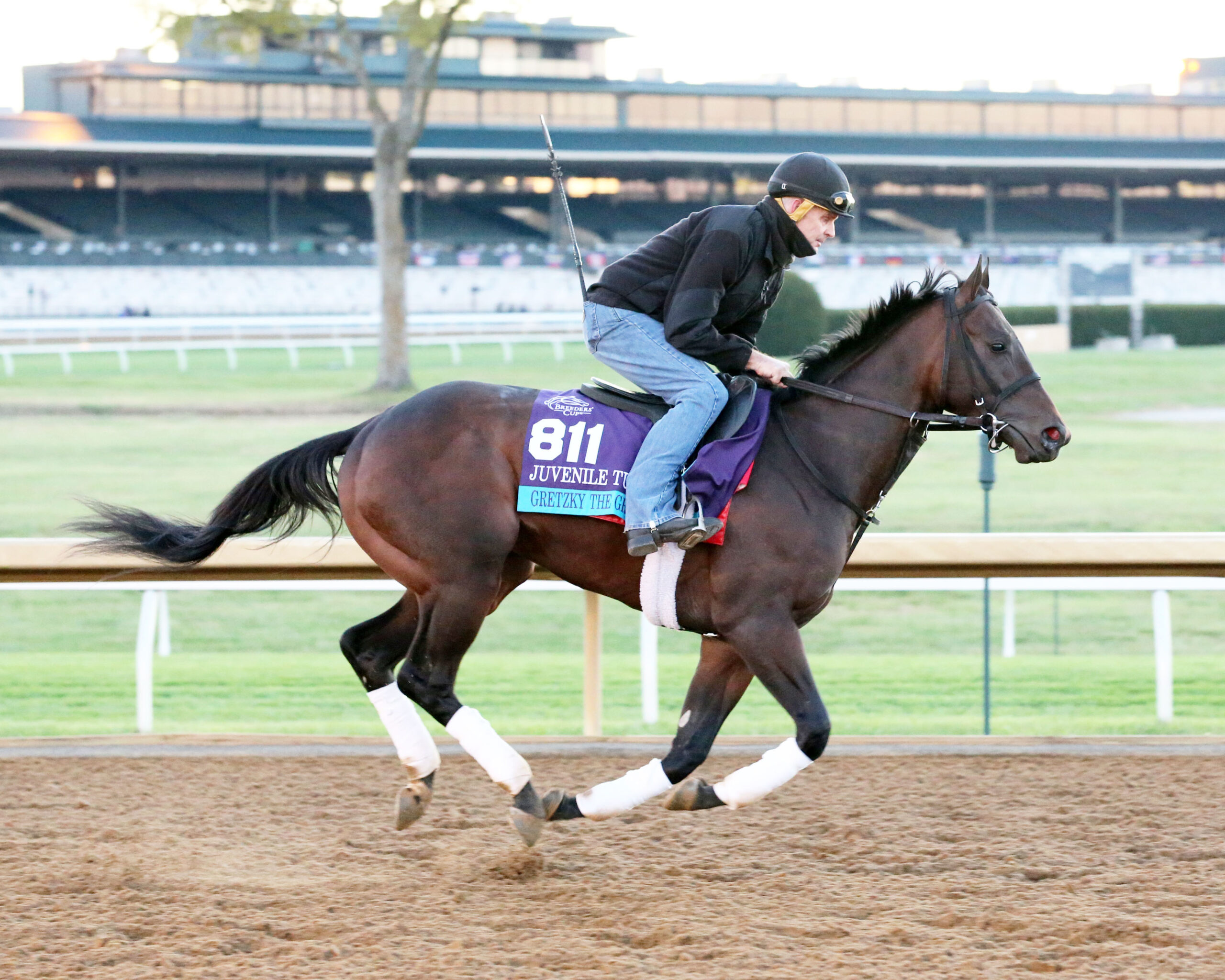 With Churchill Downs having purchased Turfway, the flagship track bumped the Grade 3 Jeff Ruby’s points to the winner from 20 to 100 for the first time, on par with the biggest prep races: Fair Grounds’ Louisiana Derby, Gulfstream’s Florida Derby, Keeneland’s Toyota Blue Grass, the Santa Anita Derby, Aqueduct’s Wood Memorial and Oaklawn’s Arkansas Derby. As a result, Saturday’s winner is assured of making the 20-horse Derby field, with the runner-up likely in the race. The Jeff Ruby also will award 20 Derby qualifying points for third and 10 for fourth.

A capacity field of twelve 3-year-olds was entered for Saturday’s 1 1/8-mile race, with the Rodolphe Brisset-trained Tarantino the 3-1 favorite, Turfway’s John Battaglia Memorial winner Hush of a Storm 4-1 and Gretzky the Great 5-1. First post is 1:12 p.m. ET with a stakes six pack spanning races 6-11 on the 12-race closing card for Turfway’s winter-spring meet. The Jeff Ruby is race 11 (6:25 p.m. ET).

Gretzky the Great, who finished third in the Battaglia in his first start this year, has raced only on turf and synthetic surfaces, winning Woodbine’s Grade 1 Summer Stakes on grass and its $100,000 prep before finishing sixth in the Breeders’ Cup Juvenile Turf. As a Canadian-bred, a major objective for him all along has been the $1 million Queen’s Plate staged over Woodbine’s Tapeta course, but that isn’t until late summer.

However, Casse believes Gretzky the Great is bred to love a true dirt surface. Should he win the Jeff Ruby, it could be awfully tempting for owners Eclipse Thoroughbred Partners and Gary Barber to roll the dice at Churchill Downs, where Gretzky the Great’s sire, Nyquist, won the 2016 Kentucky Derby.

Casse said that Gretzky the Great had minor ankle surgery after Breeders’ Cup at Keeneland and was off until the Battaglia.

“The reason I sent Gretzky to Turfway is that I’m a big believer in Tapeta,” he said. “I just think it’s much easier on them. After the Breeders’ Cup, we missed some time with him. I knew that if I was going to make a dirt start that I was going to have to breeze him two or three more times. I went to the Battaglia simply because (the surface) is not as tiring. I was even concerned he was going to be a little short for the Battaglia, but I thought it would help him move forward. And then, the Jeff Ruby was definitely the next step.

“Is the Derby a possibility? I wouldn’t rule it out. He would have to give us a tremendous performance, though, in the Jeff Ruby and then we’d have to come up with a plan on the Derby. But the Queen’s Plate is definitely in our crosshairs.”

Gretzky the Great led most of the way after breaking on the rail in the Battaglia, tiring to third behind Hush of a Storm and Like the King, who also is in the Jeff Ruby.

“He definitely was a little short,” Casse said. “We drew the one hole. I told the rider, ‘Look, I want you to put him into the race.’ I don’t like from the one hole letting horses run by you, and then they go in front of you and next thing you know you’re last going (into the turn). Unfortunately, he caught some pressure from a long shot that ran head-and-head with him for three quarters of a mile. He put that horse away and then two more came at him — two more that had to be a lot fitter than we were. I was proud of our horse.”

“I thought he tried and ran hard,” Casse said of the Battaglia. “But more importantly, he’s trained very well since then. And I’m excited. I’m very happy we picked up Chris Landeros to ride him. In my opinion, nobody rides Turfway Park like Chris Landeros. So, I think that’s a big plus for us.”

Casse, who also has Soup and Sandwich in Saturday’s Florida Derby, already has secured one spot in the May 1 Kentucky Derby with Tampa Bay Derby winner Helium, a former workmate with Gretzky the Great. “I thought they were pretty comparable,” he said.

Landeros said he was aboard for Gretzky the Great’s last two works at Turfway.

“He’s been working really well,” he said. “I can’t thank Mark and the owners enough for the opportunity. I really do think he’s going to run a big race. His last race, it was the first time in a while he’d run. He needed the race and kind of got shut off a bit down the lane. He ran a game third, and I think he’ll be ready to go.”

Landeros is hoping to cap a very good winter at Turfway with a big day Saturday. His 28 wins through Thursday rank No. 4, but his 25-percent win clip tops the leaders and he is narrowly in second behind Rafael Bejarano in purse earnings for the meet.

In addition to riding Gretzky the Great, he’s riding Into Vanishing in the $150,000 Bourbonette Oaks, whose winner will receive 50 qualifying points toward the Kentucky Oaks. Landeros has been on Into Vanishing for the 3-year-old filly’s two wins at Turfway Park for trainer Jonathan Thomas, who is 8 for 17 at Turfway’s winter-spring meet.

Landeros said his agent and brother in law, Brodie Wilkes, back in October brought up the idea of staying in Kentucky for the winter.

“I was a little hesitant at first, but as the fall came and went, I thought it was the right move,” he said. “I kind of wanted to rebuild a little bit, get some local guys on our side so when we come back in the spring to Keeneland and Churchill, we have the best momentum possible for us. Because it’s not easy; it’s tough. But I got great support between Mark Casse, Ian Wilkes, Jonathan Thomas, Rodolphe Brisset – those guys gave me great opportunities and we made the most of it. It should set up shop for a good spring and summer.”