(Coady Photography photo above of victorious Bound for Nowhere and Imprimis (#2 on rail) coming to the wire of Keeneland’s Grade 2 Shakertown.)

Published reports and social media have had some incorrect information about what did and didn’t happen to my horse Imprimis, who finished second by a nose to Bound for Nowhere in Keeneland’s Grade 2 Shakertown Stakes Saturday while racing without the anti-bleeder medication Lasix. I want to set the record straight:

Thank God the considerable blood coming from Imprimis’ left nostril after the race was not pulmonary hemorrhaging. It also was not from what has been erroneously reported as being a cut on his nose sustained when he broke through the gate prior to the start. Imprimis does have a sizable bump on his nose – about six inches from his nostril – from where his head apparently hit the gate, but he did not sustain any cuts. The endoscopic examination that I had my private veterinarian conduct did reveal trace levels of Exercise Induced Pulmonary Hemorrhaging. I’m just so thankful that it wasn’t more severe.

The bleeding episode apparently was like being punched in the nose, when you can develop a nose bleed without being cut. So Imprimis must have banged his head pretty hard and it went unnoticed.

I also don’t retract what I told journalists after the race. I’ll say it again right now: It’s not good for the industry what they’re doing forcing horses, particularly older horses, to run without Lasix in stakes races. And apparently that’s not just one trainer’s opinion. I didn’t know so many people had my phone number, all the horsemen who called or emailed me and said, “thank you for speaking up” — trainers I don’t even know. Someone in California called me out of the clear blue and said “thank you, someone had the guts to say something.” I don’t look at it that way. At the time, it wasn’t about guts, it was about being very upset over my horse. I’ve been doing this 44 years and it’s not just my livelihood, it’s my life.

The state vets at Keeneland did a very thorough examination on my horse in the morning. I’m sure they looked at him after he broke through the gate, saw no cuts, saw no head abrasions, no blood in his nose then. They put him back in the gate and let him run. If they had seen anything, I’m sure they would have scratched him.

The first thing I do after a race is look at their legs, and make sure everything is OK. When I subsequently saw his nose and blood just pouring off his left nostril, you have to assume the horse bled. When the press asked me about the race, the first thing I said was, “Well, I think my horse ran a great race, got beat by a very good horse.” I said, “He beat me, I beat him (in 2019 Shakertown), only noses separated them.” Then I started on the bleeding, because I thought my horse bled horribly. That’s when I made my statement that 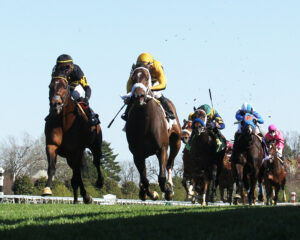 Another look at the finish of the Keeneland’s Grade 2 Shakertown. Coady Photographysomeone has to explain to me why we’re making horses bleed, older horses that have run on Lasix their whole life, and now all of a sudden you’re going to penalize the best horses in the country. It’s not good for the game, when we can stop it with an easy fix.

My veterinarian’s endoscopic exam of Imprimis showed that most of the blood was from banging his head. He did have traces, a trickle down his throat, showing that he did bleed a little in the trachea. We were very lucky. Now he might still be on track for his next race. I was very pleased for the owners that I didn’t have to put him away for four or five months. He’s bright-eyed today and looks great. He just has a bump on his nose.

There are many horses that bleed significantly but not always externally. It is wrong and naive to think no damage is being done to horses just because they didn’t bleed through the nostrils. It is also deceptive for those who are trying to label an EIPH episode only by visible blood from the nostrils. How are you going to tell an owner this horse is going to only run four times this year instead of eight or nine because I need more time in between to heal them up because he bleeds and we can’t use Lasix? They are going to start to get disgusted, and horses will be hurt if they return at all. Owners are not going to be as excited about buying horses and racing if they can’t run them more than four times a year.

I am on the board of the Florida HBPA. We are scoping stakes horses – which must run without Lasix at Gulfstream Park – and we’re paying for it so we hopefully can all learn something and together make informed and intelligent policy decisions from transparent data going forward. I’d say overall that the overwhelming majority of these horses are bleeding to some degree. The numbers aren’t good. Do we really want to do this to our horses? I sure don’t.