Churchill Downs stakes recap (Coady Photography photos. At top: Bell’s the One galloping out under Corey Lanerie after her victory over Sconsin)

LOUISVILLE, Ky. (Saturday, June 19, 2021) – Bell’s the One, winner of the $500,000 Derby City Distaff (Grade I) last September, ran down Winning Colors (GIII) heroine and 6-5 favorite Sconsin in deep stretch to prevail in Saturday’s 11th running of the $109,300 Roxelana Overnight Stakes at Churchill Downs by three-quarters of a length. 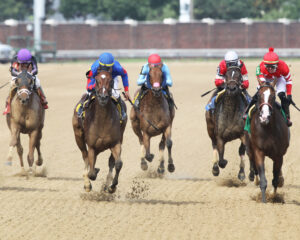 Four Graces, last year’s $100,000 Dogwood (GIII) and $98,000 Beaumont (GIII) winner who was making her first start after a 245-day break, led the field of six fillies and mares through early quarter-mile splits of :22.56 and :45.19 with Jungle Juice (IRE) in close pursuit to her outside, two-time graded stakes winner Sconsin a length back in third and Bell’s the One another length back in fourth and in the clear while heading into the turn.

Exiting the turn, Four Graces, Jungle Juice (IRE) and Sconsin were three in a line with Bell’s the One making a bold wide move. Sconsin poked her head in front with three-sixteenths of a mile to run but was quickly met by Bell’s the One at the final furlong marker and she out-kicked that rival for her sixth career stakes win.

“We’re proud of her and she ran a good race,” trainer Greg Foley said of the favorite Sconsin. “She got beat today by a nice mare.”

In her previous start, Bell’s the One finished fourth – behind champion Gamine, Sconsin and Estilo Talentoso – while attempting to defend her Derby City Distaff title seven weeks ago on Kentucky Derby Day. 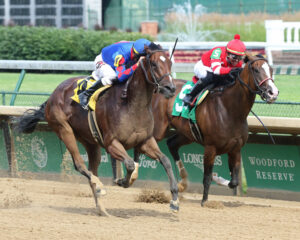 “Today I let her run a little bit out of the gate because I didn’t think the pace would be too fast,”Lanerie said. “Then, I was sort of in the pocket (inside of Sconsin) and I didn’t really like my spot because I know she needs to be outside of horses. I took her back from there to make sure I got first run at Sconsin. You could tell she was ready to run a big race and Neil had her ready to go.”

Bell’s the One is a daughter of Majesticperfection out of the Street Cry (IRE) mare Street Mate and was bred in Kentucky by Bret Jones.

“The last four or five days you could tell in her training she was ready to run a big race,” Pessin said. “She got a much better trip today than in her last start. Now, we’ll look to get her ready for the (Nov. 6) Breeders’ Cup. She’ll likely run in the (Breeders’ Cup) ‘Win and You’re In’ at Keeneland (the Grade II Thoroughbred Club of America). I’m not sure yet if I’ll run her once before then or not. We’ll wait and see but the goal is the Breeders’ Cup (at Del Mar) at the end of the year.”

Racing at Churchill Downs continues Sunday with a 10-race program that begins at 12:45 p.m. (all times Eastern).