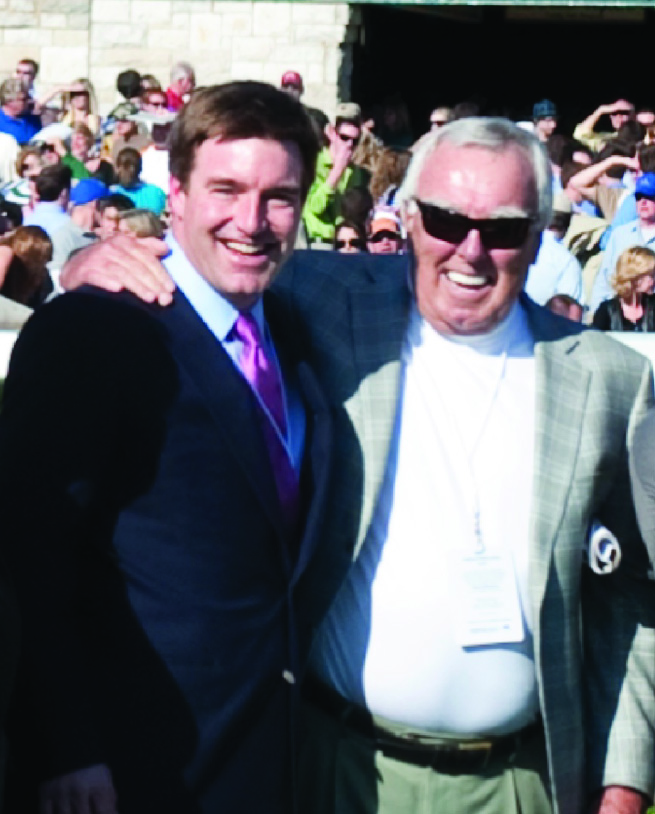 (Keeneland photo of Tom Conway, right, and his son Jack after they won the 2010 Toyota Blue Grass with 40-1 shot Stately Victor)

A celebration of life for prominent Louisville attorney and horse owner Tom Conway —  whose many roles including being a board member of the Kentucky HBPA — will be held Monday, Sept. 27,  from 4-7 p.m. ET at the Kentucky Derby Museum, with memorial comments at 7:15. Tom died at age 83 on Sept. 18 in Louisville, surrounded by his family.

Tom was a force in everything he did. A U.S. Army Military Police Officer in Germany in the early 1960s, he used the GI bill to help fund attending night law school at the University of Louisville. He became a fierce trial attorney and used the same tenacity to stand up for horsemen’s rights, including during his two terms on the Kentucky Horse Racing Commission.

He was passionate about horse racing, a love that started with his Union County roots when Ellis Park served as his hometown track. His biggest victory as a horse owner came in 2010 in winning Keeneland’s Grade 1 Toyota Blue Grass with Stately Victor, whose $82.20 win mutuel is the highest in the history of the storied race. He went on to run in the Kentucky Derby.

Conway purchased Stately Victor the year before as a 2-year-old auction and named him as a tribute for son Jack’s childhood and high-school friend Victor Perrone, who was killed in a car accident as he worked multiple jobs to put himself through law school. Tom campaigned Stately Victory in partnership with Jack, who at the time was Kentucky’s Attorney General.

While “Victor” had not hit the board in three prior races in Gulfstream Park allowance races as a 3-year-old, trainer Mike Maker – and by extension Tom Conway — continued to believe in the colt and got their payoff.

That was pretty much Tom: If he believed in you, he stuck with you through thick and thin.

Tom’s obituary is a wonderful tribute.

This is also a great story, distributed by the Associated Press and published in the Columbia Tribune, as Stately Victor prepared for the 2010 Kentucky Derby.