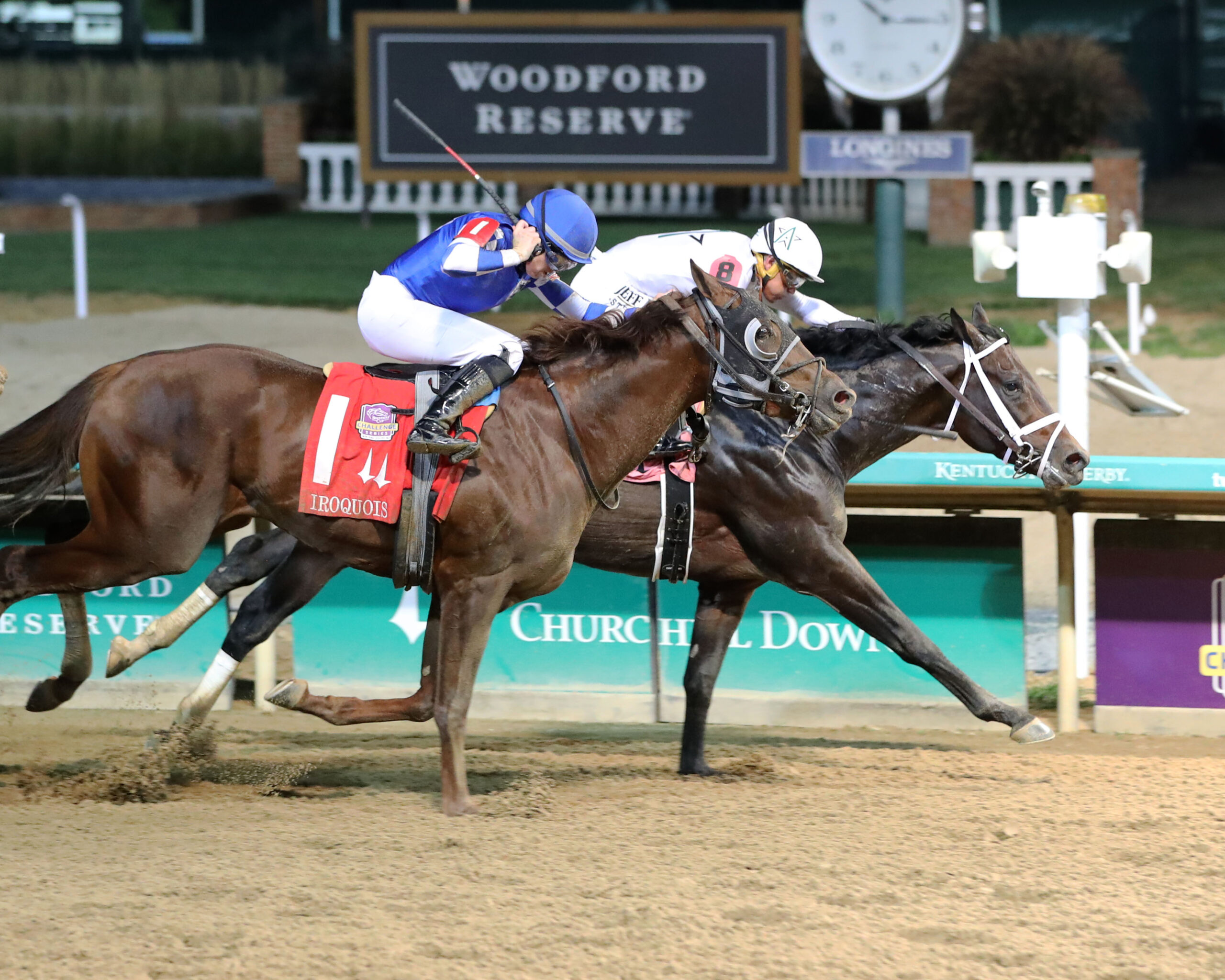 LOUISVILLE, Ky. (Saturday, Sept. 18, 2021) – WinStar Farm and Siena Farms’ Major General is the early points leader on the 2022 “Road to the Kentucky Derby Presented by Woodford Reserve” after the promising colt invaded from New York to win Saturday night’s 40th running of the $300,000 Iroquois (Grade III) for 2-year-olds by a neck over Tough to Tame in front of a crowd of 20,204 at Churchill Downs.

Sent to post as the 9-2 second betting choice following a 6 ½-furlong maiden win on Saratoga, the Todd Pletcher-trained Major General covered 1 1/16 miles on a fast track in 1:44.88 under jockey Javier Castellano to bank $177,525 and 10 points on the “Road to the Kentucky Derby” point system that will determine the field for next year’s 148th running of the Kentucky Derby Presented by Woodford Reserve (GI) on May 7, 2022 at Churchill Downs. The Iroquois was the first in a series of 37 select races on the “Road to the Kentucky Derby,” which is now entering its 10th year.

The Iroquois also is part of the Breeders’ Cup “Win and You’re In Juvenile Division” Challenge and the win by Major General earned the Kentucky-bred son of Constitution a guaranteed spot in the starting gate for the $2 million Breeders’ Cup Juvenile (GI) at Del Mar on “Future Stars Friday,” Nov. 5. Major General’s entry fees will be paid by Breeders’ Cup Ltd. and his connections will receive a travel stipend.

Roger McQueen and Magnolia Midnight battled head and head for the lead through the first 5 ½ furlongs while setting fractions of :23.82, :47.89 and 1:12.83. Major General, who stumbled at the break from post No. 8 in the field of 11, raced sixth in the clear down the backstretch.

Major General and even-money favorite Stellar Tap poked their heads in front leaving the final turn. Major General put away the favorite at the final furlong marker and had enough left to hold off a late-running 37-1 longshot Tough to Tame, 29-1 Red Knobs and 10-1 Bourbon Heist.

“You’re always confident whenever Todd puts you on a horse,” Castellano said. “His team does a great job and this horse is just learning. He seemed to enjoy going two turns and when the other horses got to him in the stretch he started to re-break.”

Major General survived a Jockey’s Claim of Foul by Ricardo Santana Jr., who finished fifth aboard Stellar Tap. The claim for an alleged incident at the top of the stretch was dismissed by the Kentucky Horse Racing Commission stewards.

“I was a little surprised Ricardo claimed foul,” Castellano said. “Going past the three-sixteenths (of a mile) pole his horse’s head sort of came into mine when he was switching leads and I don’t think it affected the outcome of the race. After that, my horse was looking around a little bit when he got to the lead. This was his first time under the lights and with a crowd like this.”

“He ran a great race closing late on the outside,” trainer Chris Davis said of Tough to Team. “I thought being on the rail hurt him in the early portion of the race. I’d love to see him draw to the outside next time and see what happens. We’re very proud of how he ran tonight.”

Major General, perfect in two starts, has earnings that total $232,525.

A $420,000 yearling purchase at the 2020 Keeneland September Sale, Major General was bred in Kentucky by Circular Road Breeders. The Constitution colt is out of the Uncle Mo mare No Mo Lemons.