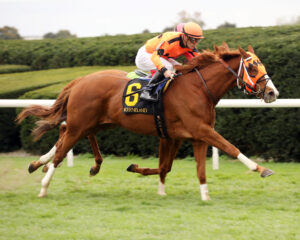 Trained by Jason Barkley and ridden by Julien Leparoux, Spooky Channel covered the 1½ miles over a turf course labeled as good in 2:29.71.

The victory is the first graded stakes win for Barkley and his first Keeneland stakes win. It is the second Sycamore victory for Leparoux, who won in 2012 on Kindergarden Kid.

“It’s a very good feeling,” Barkley said. “It’s nice to be out here on the Keeneland turf for the stakes presentation. As an assistant (trainer), we were out a few times but when you do it yourself, it’s great. It’s a team effort. It’s just exciting. Horses will take you places. It’s all him. He’s all heart. He’s a cool horse. I’m just happy to have him.”

“We had a great trip,” Leparoux said. “He broke sharp and put me in the right spot. We were lucky to cross down and be able to drop inside and save ground the whole race. I knew I was following the one to beat (Two Emmys). I knew (Spooky Channel) was going to bring me at least to the eighth pole, and when he found the room, he came nice. That was a nice race.”

Said Graham: “The winner is proven he wants to go that far. It is what it is. Everything went in our favor; it was just unlucky to lose. He ran his race.”

This is the third Grade 3 victory for Spooky Channel, whose previous scores came when trained by Brian Lynch for different ownership. Barkley claimed Spooky Channel for $80,000 at Churchill Downs in April. 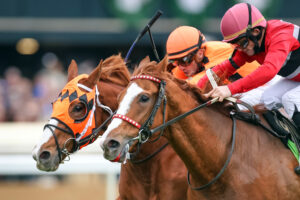 It was another 1¾ lengths back to Bama Breeze, who was followed in order by Another Mystery, Sole Volante, Kentucky Ghost, Ajourneytofreedom, Glynn County, Yamato and Breakpoint (CHI).