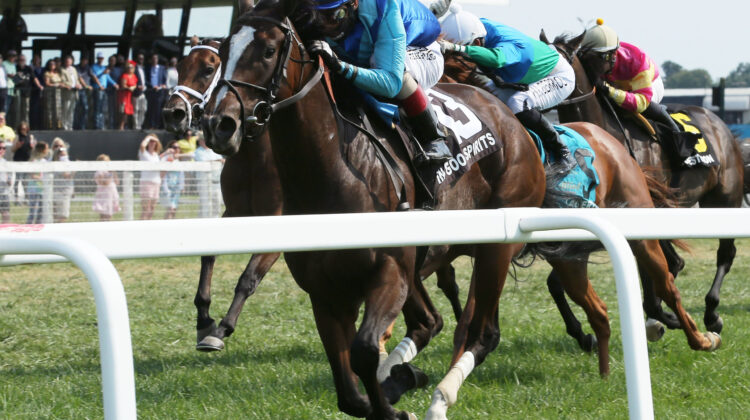 The Buffalo Trace Franklin County will go as the ninth race on Friday’s 10-race program with a 5:16 p.m. ET post time. First post Friday is 1 p.m.

Trained by Wesley Ward, Campanelle will be making her first start since being unplaced in the Prix de Maurice de Gheest (G1) at Deauville in August. Joel Rosario will have the mount Friday and exit post position four.

Also figuring to attract interest are the 1-2 finishers from last month’s Mint Ladies Sprint (G3) at Kentucky Downs: In Good Spirits and Catch a Bid.

Bal Mar Equine’s In Good Spirits, trained by Al Stall Jr., scored a 2-length victory at Kentucky Downs and in the race prior to that was runner-up in the Caress (G3) at Saratoga in July. John Velazquez has the mount on In Good Spirits, who will leave from post position five.

Highlander Training Center’s Catch a Bid, trained by Joe Sharp, won the West Virginia Senate President’s Cup at Mountaineer in August prior to her Kentucky Downs race. She drew post position six and will be ridden by Tyler Gaffalione.

Trainer Paulo Lobo already had one horse in his stable with a fees-paid berth to the Breeders’ Cup in Imperador (ARG) before Saturday. By 6 p.m. yesterday, In Love (BRZ) had punched his ticket to Del Mar with a 1½-length victory in the Keeneland Turf Mile (G1).

Lobo said that In Love as well as stablemate Ivar (BRZ) both returned to The Thoroughbred Center on the other side of Lexington last night and were doing fine Sunday morning. Ivar, in his first start in more than five months, finished fourth after a troubled trip in his bid to repeat in the Turf Mile.

In Love, who provided jockey Alex Achard with his first Grade 1 victory, earned a berth in the FanDuel Breeders’ Cup Mile (G1) Presented by PDJF, a race in which Ivar was fourth last year here at Keeneland and remains under consideration for this year.

Imperador earned his spot into the Breeders’ Cup Turf (G1) with a victory in course-record time in the Calumet Turf Cup (G2) at Kentucky Downs last month.

All three horses are owned by Bonne Chance Farm and Stud R D I. Lobo said he would ship his Breeders’ Cup runners to Del Mar on Nov. 1.

The defending champion in the Breeders’ Cup Mile, Order of Australia (IRE), finished last in the field of 12 in the Keeneland Turf Mile.

“He was a disappointment,” said Kieran Murphy, who is overseeing trainer Aidan O’Brien’s horses at Keeneland. “He had a tough draw, 10 of 13, and he doesn’t like to be in around other horses. He will leave tonight for Chicago and then fly home tomorrow.”

Trainer Kenny McPeek indicated Sunday morning that Lucky Seven Stable’s Rattle N Roll, winner of Saturday’s Claiborne Breeders’ Futurity (G1), might bypass the $2 million TVG Breeders’ Cup Juvenile (G1) Presented by Thoroughbred Aftercare Alliance on Nov. 5 in favor of a race at his Churchill Downs base. The son of Connect earned a fees-paid entry and travel expenses to the Juvenile at Del Mar with yesterday’s victory.

“I am not going to commit yet,” McPeek said. “My first instinct is to wait for the Kentucky Jockey Club (G2) on Nov. 27. The Breeders’ Cup is an ‘away game,’ and I know he likes Churchill a lot.”

Rattle N Roll made his career debut with a third-place finish on June 26 at Churchill and returned in September to win a 1 1/16th-mile maiden race. He was a clear winner at the same distance in the Claiborne Breeders’ Futurity.

“This colt wants even more distance,” McPeek said. “I think a mile and a quarter is what he is asking for.”

Rattle N Roll is a two-time graduate of Keeneland auctions. He was sold as a weanling for $55,000 at the 2019 November Breeding Stock Sale and was purchased by McPeek as agent at last year’s September Yearling Sale for $210,000. McPeek said he saw a strong resemblance to the colt’s paternal grandsire, Curlin, when he saw Rattle N Roll at the September Sale. As agent, McPeek purchased Curlin at the 2005 September Sale.

“Tejano Run was a big, scopey horse – tall  with a lot of leg to him,” he said. “Rattle N Roll has a beautiful hip and big, deep shoulder. Beautiful horse overall.”

McPeek’s family, crew and friends had multiple reasons for festivities Saturday night at his traditional semi-annual barbeque and bonfire at his Magdalena Farm in Lexington. About 100 people attended to celebrate the Claiborne Breeders’ Futurity triumph, the 21st birthday of McPeek’s daughter, Jenna, and the University of Kentucky football team’s win over Louisiana State University.

“We had birthday cake, and Jenna had champagne,” he said.

Phoenix Thoroughbred III’s Double Thunder came out of his runner-up effort in the Claiborne Breeders’ Futurity in good order, according to Ginny DePasquale, assistant to Todd Pletcher.

Double Thunder broke last in the field of 13 and rallied to claim the second spot.

“The one hole in a big field; it’s tough,” DePasquale said. “I thought he ran well.”

Pletcher said via text that Double Thunder would ship back to Belmont and “we will keep our options open.”

Brown has won the past four runnings of the 1-mile race and five overall. The only other trainer with multiple wins in the race was Brown’s mentor, Hall of Famer Bobby Frankel. Brown’s other winners are Dayatthespa (2014), A Raving Beauty (GER) (2018) and Uni (GB) in 2019 and 2020.

Both fillies came out of the race well along with sixth-place finisher Viadera (GB), according to Baldo Hernandez, Brown’s assistant at Keeneland.

With the victory, Blowout received a fees-paid berth into the $2 million Maker’s Mark Breeders’ Cup Filly and Mare Turf (G1) to be run Nov. 6 at Del Mar.

Beaten a length for the $240,000 winner’s share was Empress Josephine (IRE) for trainer Aidan O’Brien and the ownership group of Mrs. John Magnier, Michael Tabor and Derrick Smith.

“She was very encouraging,” said Kieran Murphy, O’Brien’s assistant. “The plan is to run her back Saturday (in the Queen Elizabeth II Challenge Cup-G1 Presented by Dixiana) and I think the extra furlong should benefit her.”

Godolphin’s Althiqa (GB), fourth as the favorite after a rough trip, is scheduled to begin her journey back to Europe Monday night.

“You just can’t be that far back (early) at Keeneland,” said Christopher Durham, assistant to trainer Charlie Appleby.

BELL’S THE ONE RETURNS TO CHURCHILL DOWNS

Lothenbach Stables’ Bell’s the One returned to trainer Neil Pessin’s base at Churchill Downs Saturday night following her victory in the 6-furlong Thoroughbred Club of America (G2).

Pessin reported things were fine this morning with Bell’s the One, who added Saturday’s score to her victory in the Lexus Raven Run (G2) here in 2019. In six sprints at Keeneland in her career, Bell’s the One has three wins, one second and two thirds.

Plans are indefinite for Michael and Katherine Ball’s Club Car, who came up a neck short of victory.

“Not sure what is next, but it’s not going to be the Breeders’ Cup,” trainer Ben Colebrook said. “She has been running a lot, 12 times in the past 12 months.”

NOMINATIONS TO STAKES DURING THIRD WEEK OF FALL MEET

Wolfe Racing and Hugh Robertson’s Two Emmys, winner of the Mr. D. (G1) at Arlington Park in his most recent start, plus other Grade 1 winners Channel Cat, owned by Calumet Farm, and Arklow, owned by Donegal Racing, Joseph Bulger and the Estate of Peter Coneway, top a list of 29 marathon turf runners nominated to the 27th running of the Sycamore going 1½ miles.

Juddmonte’s Obligatory, winner of the Eight Belles (G2) this spring at Churchill Downs and most recently runner-up in the Cotillion (G1) at Parx, heads a list 31 3-year-old fillies nominated to the 23rd running of the Lexus Raven Run.

The Rood & Riddle Dowager, for fillies and mares going 1½ miles on the turf, lured 28 nominees headed by Godolphin’s Adventuring, winner of the recent Dueling Grounds Oaks (L) at Kentucky Downs.

The Keeneland Shop Presents “Meet the Maker” at Milliners Corner with Christine A. Moore Millinery.

The new Keeneland Turf Pick 3 wager will be offered on the final three turf races each race day. The minimum wager is $3 and will follow the same rules as the traditional Pick 3. The new wager has a 15 percent takeout, the same low takeout as Keeneland’s popular Pick 5 wager.

Keeneland Select Handicapping Challenge. Sport of Kings, the free horse racing contest website, has this new free online handicapping contest for casual fans and serious horseplayers. The contest requires participants to make mythical selections on two Keeneland races for each day of the meet. Two seats to the 2022 NTRA National Horseplayers Championship will be awarded. To sign up, click here.

Every Friday and Saturday of Fall Meet

The Hill. At this popular tailgating area, fans can watch and wager while enjoying the racing action from the Jumbotron and wagering tent, while food trucks and live music presented by The Burl create a festive atmosphere. No ticket or reservation is required for The Hill.

Every Saturday of Fall Meet

Sunrise Trackside. This free Saturday morning program is geared toward families and offers a unique view of Thoroughbreds during training hours. Children’s activities from 8-10 a.m. include a meet and greet with Keeneland mascot Buckles, along with face painting, games and more. Fans can purchase coffee and donuts while watching horses train. The Keeneland Track Kitchen at the east end of the stable area (with no track view) is open for breakfast that includes “grab and go” and seating options. A 30-minute Paddock demonstration by an equine-related operation begins at 10 a.m. Mini tours of Keeneland will be available at the Welcome Stand in the Paddock.