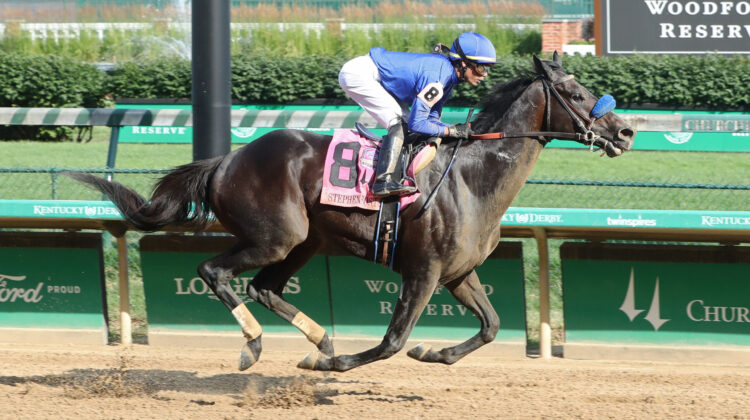 LOUISVILLE, Ky. (Saturday, Nov. 27, 2021) – Trainer Kenny McPeek had to scratch Tiz the Bomb, the 3-1 morning line favorite in Saturday’s 95th running of the $400,000 Kentucky Jockey Club (Grade II) because of a minor ailment, but Plan B worked out just fine as the McPeek-trained Smile Happy rolled to an eye-catching 3 ¼-length victory over 7-5 post time favorite Classic Causeway.

“I’m mad we didn’t win the Golden Rod (with Sandstone),” McPeek quipped. “This is really a team effort and I want to give a lot of credit to our team behind these horses. I’m really proud of the horse and thankful the Mackin Family gave us this horse to train. He’s been very impressive to start his career.”

It was another half-length back to Ben Diesel in fourth, who was followed by Howling Time, Vivar, Call Me Midnight, Red Knobs, Guntown, Texas Red Hot and Ready Pursuit. Rich Strike and Tiz the Bomb were scratched.

McPeek withdrew Tiz the Bomb, the runner-up to Modern Games (IRE) in the $1 million Breeders’ Cup Juvenile Turf (GI) runner-up, after his left front became inflamed from what appeared to be an infection.

Leaving the last turn, it was four in a line from the inside out: Howling Time, Ben Diesel, Classic Causeway and Smile Happy. Racing four-wide, Smile Happy kicked clear with three-sixteenths of a mile to run and extended his lead down the stretch for a powerful win.

“You’d think this horse ran 10 times already with how mature he acts,” Lanerie said. “He’s very ratable and easy to ride. I felt very confident with him at the half-mile pole. I could tell I had a lot of horse beneath me. I got him into the right spot and he really kicked clear in the stretch. He’s got a bright future.”

“We’ll probably take it easy with him in December and January and start deciding his future in February.” said McPeek, who also won the 2001 Kentucky Jockey Club with Repent. “At this stage we have a lot of options on the Road to the Kentucky Derby. It’s a good problem to have.”

Smile Happy, a son of Runhappy out of the Pleasant Tap mare Pleasant Smile, was bred in Kentucky by Moreau Bloodstock Int’l Inc. and White Bloodstock LLC.