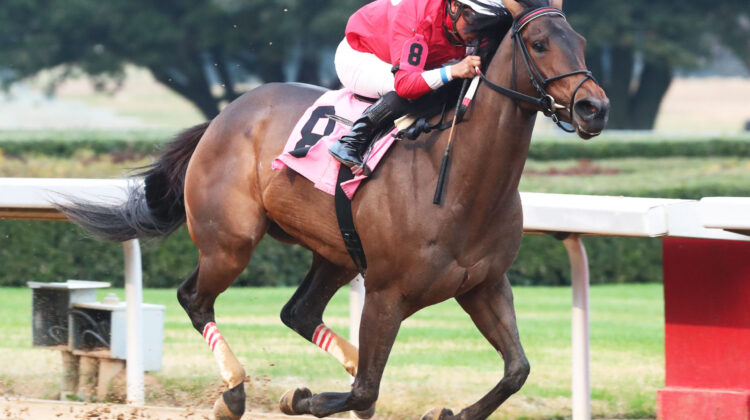 HOT SPRINGS, AR (Saturday, Dec. 4, 2021) – Trainer Phil Bauer has had Saturday’s $150,000 Mistletoe Stakes circled on his calendar for a while and his plan came together perfectly when Rigney Racing LLC’s Mariah’s Princess drew off to win the 1 1/16-mile race for 3-year-old fillies impressively.

Ridden confidently by Martin Garcia throughout, Mariah’s Princess sat right off of Lovely Ride through fractions of :24 2/5 and :49 2/5 for the first half mile before putting her head in front turning for home. The winner continued to edge clear of the field through the stretch, drawing off to win by three lengths over 8-5 favorite Amendment Nineteen in a final time of 1:44 over a fast track. Lovely Ride held on for third.

The top four finishers, including fourth-place Willful Woman, and seven of the eight horses in the field came from Kentucky.

“When you have a speed horse, especially with her tactical advantage of breaking well, she keeps herself out of trouble and if they slow it down in front, we’ll just gallop along with them,” Bauer said. “That was the plan. To see if we could break sharp like we did in the last race and if we inherit the lead, go, if not, then we’ll just track the leader. We thought we brought one of the better horses into the race, especially based off her last effort, and how she trained going into this. Certainly glad everything came together.”

Mariah’s Princess, a Ghostzapper filly, improved her record to 6-3-1-0 and has now earned $214,870. She returned $6.60, $3.40 and $3 as the 2-1 second choice in the field of eight. Marion Francis and Suki scratched. Bet down from her 8-1 morning-line odds, Mariah’s Princess came into the race off a 6 1/4-length allowance victory at Churchill Downs – her first start since finishing fifth in Oaklawn Park’s Dixie Belle last Feb. 28.

“Today, I knew she was going two turns and she handled the two turns, no problem,” Garcia said. “She broke really good. That horse outside (Lovely Ride), she wanted to go and I sat outside. When it was time to go, I just followed her. I was right next to the lead and I knew how fast we were going. We were just cruising and she was just galloping.”

Said Reylu Gutierrez, rider of Lovely Ride:  “That’s how she won at Parx (went to lead). I definitely didn’t come here to sit back on anybody. I came here to be aggressive. We got the fractions, :24, :49.”