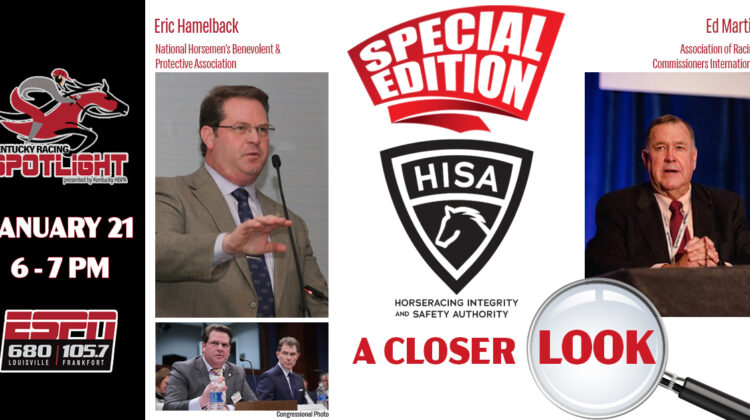 LOUISVILLE, Ky. (Wednesday, January 19, 2022) – The Horseracing Integrity and Safety Act (HISA), legislation scheduled to go into effect July 1, will be the subject of a special edition of Kentucky Racing Spotlight this Friday from 6-7 p.m. ET on Louisville’s ESPN 680 AM.

Eric Hamelback and Ed Martin, the CEOs respectively of the National Horsemen’s Benevolent & Protective Association (NHBPA) and the Association of Racing Commissioners International (ARCI), will be the featured guests discussing one of the most fundamental changes to the administrative structure of horse racing in history. Peter Ecabert, the National HBPA’s general counsel, also will participate.

“We look forward to opportunities for discussion with you after Lisa Lazarus takes on her role as CEO next month,” Zeitlin responded in an email.

Roach and Zeitlin referenced pending litigation as the reason for not participating. The National HBPA and 12 of its state affiliates have a lawsuit pending in Federal District Court in Lubbock, Texas. Additionally, nine individual states, along with two state racing commissions and the Oklahoma Quarter Horse Association, filed a separate suit in Federal District Court in Lexington, Ky.

The National HBPA believes HISA is an unconstitutional delegation of legislative authority to a private non-governmental organization – the Authority. The Kentucky HBPA, the radio show’s presenting sponsor, did not join the suit, though it was represented on the National HBPA’s executive committee that voted unanimously to pursue a legal challenge.

HISA is now the acronym for both the legislative act and the regulatory Authority the law created.

The HISA legislation was passed by Congress in late 2020 and included as part of a year-end spending and Covid-19 relief bill. The law grants the Authority broad powers to create, regulate and enforce rules with respect to medication/drug, safety and integrity matters for thoroughbred racing in the United States. The Authority is under the jurisdiction of the Federal Trade Commission, which must approve any regulations it proposes. Currently, regulations have been submitted to the FTC and published for public comment, others await submission, while no regulations have been approved or disapproved.

“We are less than 5 1/2 months from HISA’s legislatively mandated implementation,” said Kentucky Racing Spotlight co-host Jennie Rees, a veteran turf journalist who works as a communications consultant for both the National and Kentucky HBPA along with other entities in horse racing. “Our show by design is not political. HISA is clearly a polarizing issue, but we thought this close to such a paradigm shift in thoroughbred racing that it was important to get straight talk, facts and informed perspective about what it means for the industry – including racing’s consumers, the horseplayers – without the rhetoric or heated emotions.

“We are disappointed that HISA thus far has declined to participate. The invitation remains. I dare say the majority of racing participants – including many supporting or opposing the law – have no idea what is and isn’t in the legislation. We wanted to take one step toward changing that.”

The National HBPA represents close to 30,000 licensed owners and trainers throughout America, making it the largest thoroughbred horsemen’s organization in the world. ARCI is the umbrella organization of the official regulatory and rule-making bodies for horse and greyhound racing throughout North America and parts of the Caribbean. The organization’s members heretofore were the only independent entities recognized to license, enforce and adjudicate matters pertaining to racing.

Kentucky Racing Spotlight, co-hosted by Joe Clabes, airs weekly through March 4 on ESPN 680-AM/105.7 FM, the region’s sports-talk leader. The program also will be streamed live at espnlouisville.com, on the ESPN 680 app and the TuneIn and iHeart apps. The replay will be available on espnlouisville.com under the podcasts tab. All shows also are archived at davisinnovation.com/kyracing.