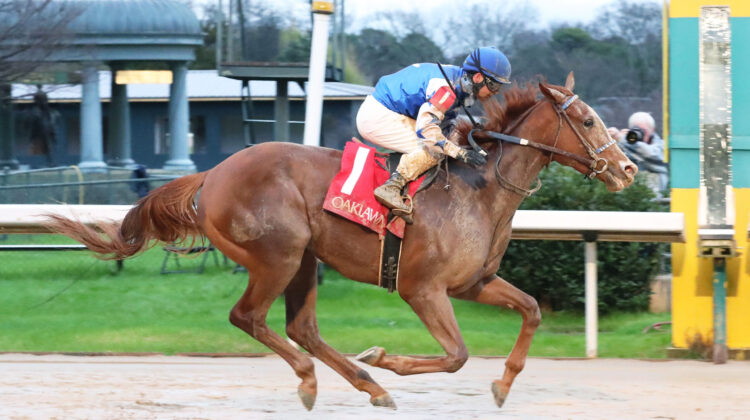 Kentucky-based trainer Kenny McPeek has a problem, but it’s a good problem for a trainer on New Year’s Day. McPeek enters 2022 with several live Kentucky Derby prospects to maneuver, including Oaklawn-based Dash Attack, who celebrated his birthday with a victory in Saturday’s $250,000 Smarty Jones Stakes for 3-year-olds to remain unbeaten in two career starts.

Dash Attack’s victory came a little over a month after stablemate Smile Happy won the $400,000 Kentucky Jockey Club Stakes (G2) for 2-year-olds at Churchill Downs to remain unbeaten in two lifetime starts. McPeek’s arsenal of newly turned 3-year-olds also features Rattle N Roll, winner of the $500,000 Breeders’ Futurity (G1) Oct. 9 at Keeneland, and Tiz the Bomb, who broke his maiden by 14 ¼ lengths on dirt at a mile last summer at Ellis Park before winning grass stakes at Kentucky Downs and Keeneland.

Ridden by David Cohen, Dash Attack ($17.40) was a two-length winner of the Smarty Jones, which marked Oaklawn’s first of four Kentucky Derby points races. Barber Road finished second, a length clear of Ignitis. It was a nose farther back to Kavod in fourth.

Dash Attack collected 10 qualifying points for the victory and ranks eighth on the latest official Kentucky Derby leaderboard compiled by Churchill Downs. Rattle N Roll (10) and Smile Happy (10) are second and fifth, respectively. The Kentucky Derby is limited to 20 starters, with points earned in designated races like the 1-mile Smarty Jones used to determine starting preference.

Oaklawn’s Kentucky Derby points series continues with the $750,000 Southwest Stakes (G3) at 1 1/16 miles Jan. 29. McPeek said early last month that Smile Happy was under consideration for the Southwest, but that was shortly before Dash Attack won his Dec. 5 career debut at Oaklawn. Now, the Munnings colt is armed with two victories at a mile, one coming in a Kentucky Derby points race.

“Nothing is set in stone with this, with any of them, as you know,” McPeek said by phone from Florida following the Smarty Jones. “Right now, Smile Happy is still just getting ready. He just had a little three-eighths, out an eighth, today. The next couple of weeks we’ll step him up. We’ll figure it out. If they go together, they go together and if they don’t, they don’t.”

McPeek’s strong hand of early 2022 Kentucky Derby candidates only got stronger with Saturday’s performance by Dash Attack, who was facing winners for the first time.

“He definitely jumped into the conversation,” McPeek said. “Smile Happy’s a very good horse. Most years you would want to have all these horses separated in different years. I’ve always watched guys like, whether it was Wayne Lukas years back, and there’s others, obviously, Bob Baffert, and others. You look up and all of a sudden you’ve got that group of horses and they’re all coming together. Look, a lot can happen. We’re just going to try and keep it steady and not overthink it and let the horses take us where they’re going to take us.”

“He just was immature,” McPeek said. “We actually sent him to the farm a couple of times because I felt like he wasn’t ready. He’s just a little bit later bloomer, but he’s always been a big, strong, gorgeous horse to look at and be around. I think our patience has paid well. If we had pressed him earlier in the year, he certainly wouldn’t be doing what he’s doing now.”

Although by Munnings, a multiple Grade 2-winning sprinter, McPeek said he believed Dash Attack was a two-turn horse. McPeek also trained Dash Attack’s dam, Cerce Cay, who broke her maiden at 1 1/8 miles on the turf in 2012 at Churchill Downs.

“She had quite a bit of talent,” McPeek said. “The other interesting thing about this horse is that we raised this horse. We partnered in on his mare. We’re involved in breeding with Rick Greenberg, so we bred him and raised him at Magdalena. Where he came from is pretty special. Most of my m.o. is that I buy horses at auction. In his case, he came from Magdalena Farm.”

Dash Attack received a preliminary Beyer Speed Figure of 82 for his victory in the Smarty Jones, which drew a record 13 starters. His winning time over a sloppy track was 1:39.44. Dash Attack, who is named after the 4-year-old grandson of Greenberg’s fiancée, Linda Hamilton, has earned $205,440.

There was no training Sunday morning because of freezing overnight temperatures. … Favored Peaceful Street ($5.20) became the meet’s first two-time winner in Saturday’s third race. Ramon Vazquez rode the winner for 2020 Oaklawn training champion Robertino Diodoro. Vazquez and Diodoro also teamed to win Saturday’s sixth race with favored Long Term Thinking ($7.20). … Dash Attack ($17.40) became the meet’s second two-time winner in Saturday’s ninth race, the $250,000 Smarty Jones Stakes for 3-year-olds. … Francisco Arrieta rode two winners Saturday to pull into a tie with Florent Geroux atop the jockey standings. Arrieta won the first race aboardSalado ($9.40) for trainer Joe Sharp and the seventh race aboard Home Base ($15.60) for trainer Cipriano Contreras. Arrieta and Geroux each entered Sunday with 13 victories. … Jockey Tiago Pereira recorded his first career Oaklawn victory in Saturday’s 10th race aboard Zitman ($18.20) for trainer Wayne Potts. It was the fifth career Oaklawn mount for Pereira, who was previously based in Southern California. Pereira’s agent is retired Hall of Fame jockey Gary Stevens. … Oaklawn surpassed $2 million in claims at the meet Saturday, with 94 totaling $2,161,250. Saturday was Day 11 of the scheduled 66-day meeting. … Post positions will be drawn Monday for the $150,000 Pippin Stakes for older fillies and mares Jan. 8. The 1-mile race closed with 20 nominations.