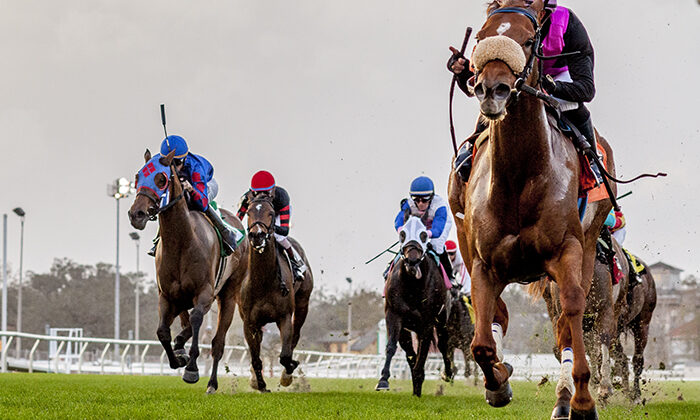 New Orleans (January 1, 2022) – Having proven quick with no quit, M Bar O’s Elle Z loomed large over a field that, on paper, seemed likely to contest the newly-turned 5-year-old mare’s front-running style. But the gate-to-wire winner of the 3rd running of the $75,000 Nelson J Menard Memorial Stakes instead took it easy out front, subsequently increasing her margin of victory under jockey Mitchell Murrill to five lengths over She Can’t Sing.

“She’s one-dimensional,” Murrill said of the Chris Hartman-trained Elle Z. “You let her do her thing, stay out of her way and hope she’s the best of the day.”

And best she was, though the other horses with early speed never mustered much, leaving her with plenty in the tank in the end. Setting fractions similar to the second race of the day–a maiden special weight turf sprint, the 2.30-1 second choice Elle Z cleared the field while chased by Payntdembluesaway (5.70-1) through the opening quarter in 22:56. Little changed by the time they hit the 2nd call at 46.70, but the presser was done for as new threats rounded the turn. Eventual second-place finisher She Can’t Sing (9.30-1) took the turn 4-wide and had to steady after bumping a foe coming out of the bend, making it impossible to catch Elle Z who had put too many lengths between her and her foes, cruising home in 1:04.58 for the 5 ½ furlongs on good turf.

Up for third, 1.80-1 betting favorite Time Limit, who had traffic to contend with in the stretch after saving ground throughout. After a good break and a pocket trip, Yes It’s Ginger (10.40-1) managed fourth — another horse who would have benefited from faster fractions softening up Elle Z.

“She broke great today and put herself in a great spot,” Yes It’s Ginger’s rider Brian Hernandez, Jr. said.  “Going around the turn I was right behind Elle Z knowing she would go on. Where we were from that position, I thought we were going to run her down.”

Accomplished on dirt and turf at Fair Grounds, having won a stakes race on each, Elle Z’s record is 16-7-3-0 racking up $355,283. She was nailed by a nose in her prior start, the Pan Zareta.

“She’s always been a good honest horse that tries 100 percent,” Murrill said. “Unfortunately the last time she did get nailed, but today she felt a little more relaxed in the post parade and leading into the first part of the race she was quite happy.”