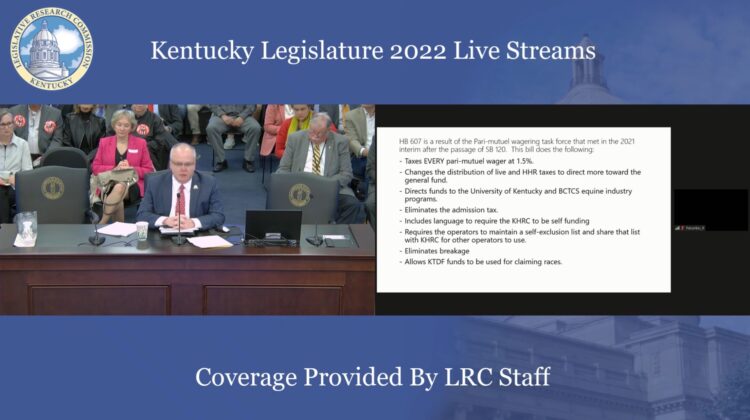 FRANKFORT, Ky. (Wednesday, March 16, 2022) — A bill standardizing the tax rate on all pari-mutuel wagers placed in Kentucky as well as making claiming races eligible for Kentucky-bred purse supplements and benefiting horseplayers through the elimination of breakage was overwhelmingly approved Wednesday morning by a Kentucky House of Representatives’ committee.

Rep. Adam Koenig said House Bill 607, which he is sponsoring, will significantly increase revenue to Kentucky’s General Fund while allowing horse racing to thrive. Koenig temporarily turned over chairmanship duties for the House Standing Committee on Licensing, Occupations and Administrative Regulations to Rep. Matt Koch during discussion of his bills.

“In a couple of years, we’re looking at a $27 million increase, probably at a minimum,” Koenig told the committee, noting that’s in addition to the $62 million projected to flow to the state from parimutuel taxes in 2022. “… So the money is coming in from the industry. I think I found some creative ways generating additional money without hurting the product.”

Also easily passing the “L&O” committee Wednesday were bills that would legalize betting on sports in Kentucky and provide funding for problem gambling. All three bills are sponsored by Koenig, a horseplayer and racing fan whose Northern Kentucky district is near Turfway Park.

All pari-mutuel wagers to be taxed at 1.5%

HB 607 calls for taxing pari-mutuel wagers off the top at 1.5 percent. That is the same rate currently assessed for HHR gaming. However, the bill raises the current rate for bets placed through online platforms (or Advance Deposit Wagering, commonly referred to as ADWs) from 0.5 percent. The tax rate on simulcast wagers placed at a Kentucky track on an out-of-state race would drop from 3 percent. The majority of bets are now placed through ADWs, while simulcasting has shrunk considerably as horseplayers opt for the convenience of wagering online.

Horseplayers would benefit from ending breakage

Koenig has received national attention and praise from horseplayer advocates for being a champion of the virtual elimination of breakage. That’s where tracks round winning payoffs down to the nearest dime based on a $1 bet. Breakage under HB 607 requires tracks to pay off to the nearest penny, resulting in more money being returned to horseplayers. Koenig cited the example of 2018 Triple Crown winner Justify paying $7.80 on a $2 Kentucky Derby win bet, a payout that would have been $7.92 without the breakage.

“That is the bettors’ money,” Koenig said. “I’ve been very interested since last year’s HHR debate in making sure the bettors are taken care of. We took care of everyone else. Everyone is getting healthy on this except for the bettors, and this is how we’re going to help the bettors. They’re going to get paid to the penny rather than every 20 cents. In addition to taking care of the bettors, it will make Kentucky the place in North America to wager. If you’re someone who wagers a lot of money, why would you bet anyplace else?”

HB 607 also opens the door for Kentucky-bred purse supplements to be used on claiming races – a policy change strongly pushed by the Kentucky HBPA in order to raise purses for the lower-level races in which many horsemen compete. Currently, money from the Kentucky Thoroughbred Development Fund (KTDF) is restricted to non-claiming races.

Rep. Al Gentry, a member of the pari-mutuel wagering task force, called making claiming races eligible for KTDF supplements “very, very important and one of the big pieces of the bill.”

‘The money is coming from the industry’

HHR has allowed Kentucky to offer some of the highest purses in the world, with that revenue expected to grow considerably with the expansion of satellite facilities. With that in mind, HB 607 stipulates that after the KTDF money reaches $40 million and the Kentucky Standardbred Development Fund hits $20 million in a year, the rate going to purses would decrease, with the difference channeled to the state’s General Fund.

“We believe in two or three years, when the Historical Horse Racing facilities are more mature, that we’re looking at $20 million additional in the General Fund,” Koenig told the committee. “The increase in the ADW tax from one-half to 1 1/2 percent will immediately generate $4 million a year. That’s the growth area, so that will continue to go up over time.”

The bill also requires that the Kentucky Horse Racing Commission be self-sustaining, rather than the cost coming out of the General Fund. Koenig called that a savings of about $3 million a year.

“We have enough of the HHR machines now that they can put a fee on there and be self-sufficient,” he said of the commission, adding of the General Fund “… In a couple of years, we’re looking at a $27 million increase, probably at a minimum. This $27 million is on top of the additional monies that are being generated. Even if we do nothing, those monies have gone up quite a bit: 2021 was $41 million (generated for the state from parimutuel taxes), which was more than the previous two years combined. This year the estimate is $62.7 million.

“So the money is coming in from the industry. I think I found some creative ways of generating additional money without hurting the product. I know there was a lot of discussion on the floor last year about raising the HHR tax, and Rep. Koch and I stood up and promised we would look into it, and we did.”

Koenig emphasized that HHR (and other pari-mutuel wagers in the state) are taxed on gross. “Whereas, when you have casinos and slot machines, they typically tax it on their profits,” he said.

Provides funding to the equine programs at the University of Kentucky and Bluegrass Community and Technical College. The University of Louisville business school’s Equine Industry Program already receives funding from pari-mutuel wagering.

Eliminates the 15-cent per person admission tax racetracks currently pay even if they don’t charge admission (which is every track except Churchill Downs and Keeneland).

Requires tracks to maintain a “self-exclusion” list – where individuals such as problem gamblers can say they don’t want to be allowed into a track or HHR facility for a given period of time — to be shared with the racing commission and the other tracks and HHR properties.

The bills still must be approved by the full House before being sent to the Senate. 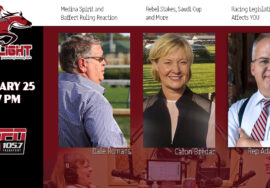