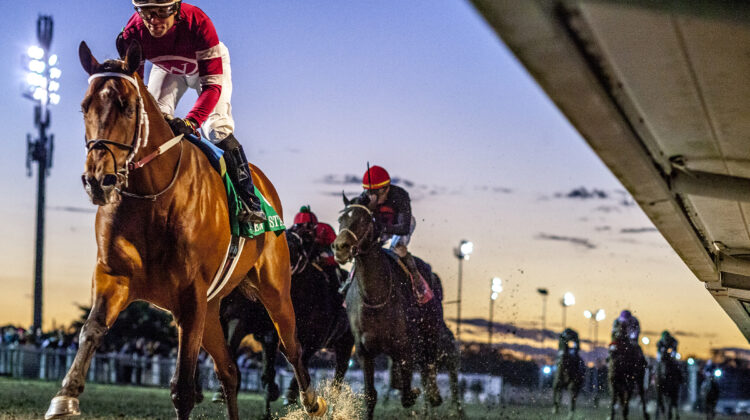 LOUISVILLE, Ky. (Thursday, March 24, 2022) – Following a one week hiatus, the Road to the Kentucky Derby Championship Series is back in high gear Saturday with a quartet of qualifying races led by the premiere race of Fair Grounds’ season, the $1 million TwinSpires.com Louisiana Derby (Grade II).

Earlier Saturday morning, 16 horses are entered to compete in the $1 million UAE Derby (GII) and the Japan Road to the Kentucky Derby finale, the Fukuryu Stakes, is on tap at Nakayama Racecourse. On Sunday, eight 3-year-olds are entered in the $500,000 Sunland Park Derby (GIII).

The Louisiana Derby and UAE Derby are the first two of eight races over the next three weeks on the Road to the Kentucky Derby Championship Series that will offer a maximum of 170 points to the top four eligible finishers on a 100-40-20-10 scale.

Buckle up, the next six weeks leading to the $3 million Kentucky Derby presented by Woodford Reserve (GI) are set to be filled with thrilling racing action and drama leading up to the first Saturday in May.

The 1 3/16-mile Louisiana Derby is slated as the finale on Fair Grounds’ 12-race program. Post time for the Louisiana Derby is 6:44 p.m. (all times Eastern) and first post is 1 p.m. In total, Fair Grounds will offer eight stakes races Saturday and fans can wager on an all-stakes Pick 5 sequence (8-12) that will have a guaranteed pool of $500,000. Wagering is available on www.TwinSpires.com, the official ADW of the Kentucky Derby and Churchill Downs Incorporated.

Fans can watch the Louisiana Derby on CNBC starting at 6 p.m. or can view the entire card on TVG.

The speedy Epicenter, trained by Steve Asmussen, drew post No. 6 for Saturday’s affair. The son of Not This Time cruised to a front-running 2 ¾-length victory in the Risen Star under 2013 Kentucky Derby-winning jockey Joel Rosario. Epicenter began his career at Churchill Downs and broke his maiden in his second start on Nov. 13 by 3 ½ lengths. In his third start, Epicenter dominated six rivals by 6 ½ lengths in the $98,000 Gun Runner. In his first start as a 3-year-old, Epicenter battled on the lead in the $200,000 Lecomte (GIII) but gave way late to the fast-charging Call Me Midnight. Rosario will once again ride Epicenter in the Louisiana Derby at morning line odds of 7-5.

“It was important for him to start at a mile then progress like he has through longer distances and now we get this race, and the (1 3/16-mile) distance could be a separator,” Asmussen said. “He has progressed well through each of these steps and his progress has been very encouraging up to this point and he will just have to prove it again on Saturday.”

Among Epicenter’s top challengers in the Louisiana Derby is Peter Cantrell and Benjamin Gase’s aforementioned Lecomte winner Call Me Midnight. Trained by Keith Desormeaux, Call Me Midnight hasn’t raced since the Jan. 22 race but has kept steady training at Fair Grounds.

“Right after the Lecomte, it seemed like a no brainer to come back in the Risen Star,” Desormeaux said. “After talking in over with Pete and putting all the factors out there, which included a heavy campaign as a 2-year-old and the great response he had after the time between the Kentucky Jockey Club and Lecomte, plus the fact that we’re not only planning to run in the Louisiana Derby but the Kentucky Derby, we just thought that this is what the facts are telling us. He had a good foundation as a 2-year-old, plenty of racing, he’s fit, he ran a good race off the slight layoff, let’s keep with that pattern, which meant let’s skip the Risen Star and go straight to the Louisiana Derby. The Kentucky Derby would then be his third race back.”

The late-running Call Me Midnight will break from post 3 with James Graham in the saddle.

In the Lecomte, Call Me Midnight was able to benefit from the contested early pace. One of the early pace factors in the Louisiana Derby could be Barry and Joni Butzow’s recent 10 ¼-length allowance winner Zozos. Trained by Brad Cox, Zozos broke his maiden at Fair Grounds on Jan. 23 then pressed the early pace in a 1 1/16-mile allowance event at Oaklawn where he dominated the field of 11 3-year-olds under jockey Florent Geroux. The homebred son of Munnings will be ridden by Geroux in the Louisiana Derby from post 2.

Silent Power and Curly Tail were not made early Triple Crown nominees. They can become eligible for the series with a $6,000 late payment that is due Monday.

FIELD OF 16 ENTERED IN $1 MILLION UAE DERBY – A full field of 16 3-year-olds were signed on to compete for a possible 170 points on the Road to the Kentucky Derby in the $1 million UAE Derby (GII) at Meydan Racecourse.

There are 12 horses currently eligible to garner points in the UAE Derby field. Three of the ineligible horses were bred in the Southern Hemisphere – therefore, they are considered 4-year-olds – and the other, likely favorite Pinehurst, is campaigned by Bob Baffert who is suspended by Churchill Downs Incorporated from competing in this year’s Kentucky Derby.

Aside from Pinehurst, there are two other U.S.-based horses in the race – WC Racing, Aldabaugh, Wonderland and Goldstein’s Get Back Goldie and Grandview Stable and Don Alberto Stable’s Gilded Age.

Only Crown Pride, Island Falcon, Pinehurst, Reiwa Homare and Sekifu were nominated to the Triple Crown. All other eligible 3-year-olds can pay a late $6,000 nominate fee that is due Monday.

The UAE Derby will be shown on “America’s Day at the Races” on Fox Sports 2 and TVG. Fans are invited to bet on www.TwinSpires.com, the official wagering provider of the Kentucky Derby and Churchill Downs Incorporated.

LOS ALAMITOS FUTURITY WINNER SLOW DOWN ANDY TOPS SUNLAND DERBY –Reddam Racing’s homebred Slow Down Andy, the one-length winner of the $300,000 Los Alamitos Futurity (Grade II) as a 2-year-old, will be in search of the first victory in his 3-year-old campaign as one of the top choices in Sunday’s $500,000 Sunland Park Derby (GIII).

The California-bred Slow Down Andy, trained by two-time Derby-winning conditioner Doug O’Neill, put his name into Derby contention when he defeated four rivals in the Los Alamitos Futurity. The chestnut son of Nyquist made his first start as a 3-year-old in the $400,000 Risen Star (GII) but faded to sixth after a wide journey throughout the 1 1/8-mile race. Slow Down Andy will add blinkers for the first time in the Sunland Derby and will break from post No. 4 with Mario Gutierrez in the saddle.

Another top contender in the Sunland Derby appears to be Jungle Racing’s $100,000 Mine That Bird Derby winner Straight Up G. Trained by Richard Baltas, Straight Up G has not finished worse than second in his last four starts. The homebred son of Straight Fire, who runs in the colors of famed sports talk host Jim Rome, drew post 8 with Ricardo Gonzalez.

Bye Bye Bobby, Pepper Spray, Chrome King and Straight Up G are not currently nominated to the Triple Crown. Their connections can make them eligible with a $6,000 late payment that is due Monday.

Fans can watch the Sunland Park Derby on TVG and wagering is available onwww.TwinSpires.com, the official wagering provider of the Kentucky Derby and Churchill Downs Incorporated.

Yoshihisa Ozasa’s Ho O Roulette, a son of the former Dale Romans-trained Roses in May, is undefeated in two starts at Nakayama, including a six-length victory last out in the Kurochiku Sho.

Kazuo Kato’s Jasper Great, trained by Hideyuki Mori, has already shipped to the U.S. once and finished a disappointing 10th in the $2 million Breeders’ Cup Juvenile (GI).

Yoshizawa Holding’s Line of Soul, campaigned by Hidetaka Otonashi, finished 12th in the Hyacinth Stakes, which was the penultimate leg of the Japan Road to the Kentucky Derby run Feb. 20. Line of Soul will enter the Fukuryu following a third-place finish in an allowance event at Hanshin.

KEY RACES TO WATCH – It’s a jam-packed weekend on the Road to the Kentucky Derby Championship Series with a trio of races that highlight the weekend schedule. Here is a calendar of the key races to watch Saturday:

Below is a calendar of the top 3-year-old stakes to watch this weekend, along with several of the world’s top stakes events that have horses who could run on Kentucky Derby Week at Churchill Downs:

The son of Giant’s Causeway galloped to a front-running 2 ½-length victory in the Tampa Bay Derby to earn 50 additional points toward the first Saturday in May.

Here are the top 20 horses on the Road to the Kentucky Derby leaderboard:

Champion filly Echo Zulu is set for her return Saturday in the $400,000 TwinSpires.com Fair Grounds Oaks (GII). The undefeated daughter of Gun Runner drew the rail for her 3-year-old debut and will face five rivals. The top 4 finishers will receive 100-40-20-10 points toward a spot in the starting gate for the $1.25 million Longines Kentucky Oaks (GI)…

Trainer Kenny McPeek reported Monday that top Derby contender Smile Happy would make his final prep prior to the Kentucky Derby in the $1 million Blue Grass (GII) at Keeneland. McPeek originally reported he was considering running Smile Happy in either the Blue Grass or Florida Derby…

Sunday will be the first time since 2019 the Sunland Derby will be run. It was not run the last two years due to COVID-19 restrictions in New Mexico…

The first horses returned to the Churchill Downs backside Tuesday morning to begin their preparation for the 2022 Spring Meet. The first arrivals at Churchill Downs were from the barn of Mike Tomlinson while trainers Lynn Cash, Cherie DeVaux and Frank Miller shipped in to Trackside Louisville, which is located approximately three miles from the main track. Several hundred more horses are expected to return to Louisville in the next 7-10 days. Training over the track begins Friday…

The first of two condition books for the 2022 Spring Meet has been released. To view Book 1 of the Churchill Downs condition book, visit: www.churchilldowns.com/horsemen…

French Derby-winning jockey Vincent Cheminaud will be a new addition to the riding colony at Churchill Downs. The 28-year-old Frenchman began riding two weeks ago in Kentucky at Turfway Park. He’ll be represented by Steve Bass, who was the longtime agent of fellow French rider Julien Leparoux. Cheminaud visited Churchill Downs for the first time last week with jockey Florent Geroux, who has been helping him get acquainted to his new life in the U.S. “This place is amazing,” Cheminaud said. “I can’t wait to get started.”…

The final pool of the Kentucky Derby Future Wager will run Thursday-Saturday next week. The field will be announced Tuesday and close prior to the first Championship Series race run Saturday afternoon.

Note: The possible fields for upcoming Kentucky Derby Championship Series races are fluid as owners and trainers vie for points. Known possible horses mentioned to be under consideration for each race are based on published news reports and other sources. Horses listed in italics are possible for multiple races.