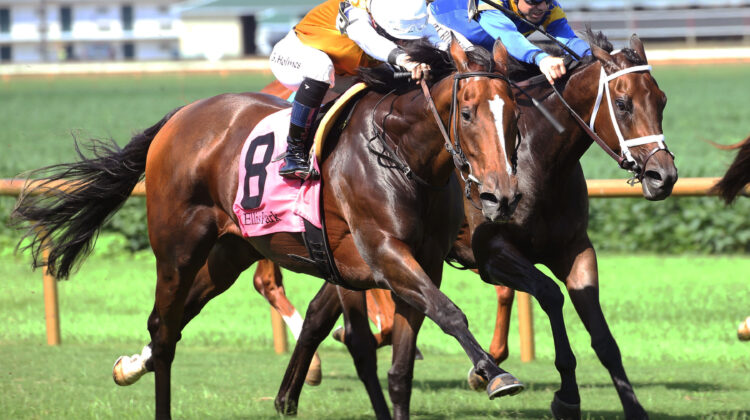 (Links to video interviews at bottom)

For a pair of young female jockeys, it was exceptional business as 26-year-old apprentice Gage Holmes won the $100,000 Centennial Distaff Turf Mile on Henrietta Topham and 27-year-old Mickaelle Michel of France two races later captured the finale on Gray’s Fable in the $100,000 Henderson Turf Mile.

The all-turf stakes sequence kicked off with a horse trained by North America’s all-time win leader — Hall of Famer Steve Asmussen — paying $47.80 as the second-longest shot in the field nine as the Vincent Cheminaud-ridden All in Sync beat older horses in the $100,000 Twin Spires Turf Sprint.

That was followed by Holmes, who only started riding late last year, earning her first stakes victory aboard Henrietta Topham, the 4-year-old filly paying $21.44 in her third straight win.

The racing wrapped up with Gray’s Fable ($23.54) and Michel holding off favored Mr Dumas by a neck while both horses wore down the front-running Tut’s Revenge, who finished another head back in third in the capacity field of 12.

Asmussen’s goal was to get All in Sync on the turf, a mission thwarted but still successful when the colt beat fellow 3-year-olds in the Dade Park Turf taken off the grass. So with the ultimate objective being Kentucky Downs’ $600,000, Grade 2 Franklin-Simpson for 3-year-olds, Asmussen put Ed and Susie Orr’s All in Sync in against older horses, getting the same result and finding out that the colt likes the grass just fine.

“We’re thrilled for the horse and all involved,” said Marissa Short, who oversees Asmussen’s Ellis operation. “He’s kind of evolved between the first stakes and this. He’s changed into a more mature, confident horse.”

All in Sync beat Charcoal by a neck, with Bad Beat Brian another half-length back in third after nosing out 2019 winner Totally Boss.

As an apprentice jockey who hasn’t yet won 50 races (she’s at 28 through Sunday), Gage normally would get a seven-pound weight allowance in Kentucky to encourage trainers to use her. But that doesn’t apply in stakes races. Trainer Geoff Mulcahy acknowledged thinking about switching to a more experience jockey but concluded, “If it’s not the right time to go for a stakes when you’re coming off two wins, when is? And Gage was a part of those two wins.”

Said owner-breeder Michael Burns: “We got a lot more than seven pounds, we got a lot of talent.”

Henrietta Topham rallied to out-finish favored Turnerloose by a half-length, with 17-1 pacesetter Touch of Class another neck back in third in the field of nine fillies and mares.

Holmes groomed horses while attending Penn State, where she graduated with degrees in veterinary and biomedical science. After college, she decided she wanted to become a jockey.

“First and foremost, I am just so thankful,” Holmes said. “… I felt like I had a ton of horse underneath me. Turning for home, when everybody started moving, I’m like, ‘OK, here’s your moment.’ … I saw how much the other guys were working around me, and I was just sitting there.”

It also was the first stakes victory for the Lexington-based Mulcahy, though he certainly has been around stakes winners. Mulcahy and his wife, Sandra, oversee the training of 50 horses. But the Mulcahys work with 48 of those for other trainers, either getting them ready for the races or off layoffs. (That includes getting the foundation training into future Kentucky Oaks winner Shedaresthedevil.)

Creative Credit, who is trained by Cincinnati-based T.R. Hahn, defeated Elle Z in similar front-running fashion in their last start, Indiana’s Clarksville Stakes. But owner-breeder Richard Finucane said he understood Creative Credit’s odds, given that the 5-year-old mare had never won a race beyond five-eighths of a mile.

“She just left there in front, and when they tried to get close to her, she reached down a little bit,” Finucane said. “She didn’t know she was 11-1.”

Favored Elle Z, who generally is the one in front, put the early pressure on Creative Credit but faded to seventh in the field of 10 fillies and mares running 5 1/2 furlongs.

“I really thought she had a shot in here,” Pompell said of his 2,899th career winner.

Churchill Downs-based trainer Brian Lynch, who had the first or second choice in all four stakes, came into the nightcap with his best finish being a third with Tobys Heart in the Distaff Turf Sprint. The Henderson Turf Mile was Lynch’s third start with Gray’s Fable since getting the 7-year-old gelding after his victory in Churchill Downs’ Opening Verse for Canadian-based trainer Roger Attfield.

“He was in great form, and then he sort of ran two sub-par races,” Lynch said of the gelding owned by Steve Goldfine, Kari Provost and Jeff Zlonis. “But in the interim, he’s always trained like a horse that can pull off a race like this. Obviously he gets along with Mickaelle. He’s a very quirky horse, so it was nice to see her display her talents. She’s certainly someone with a future.

“Look, we ran four in four stakes (Sunday). I was hoping to win one of them. So finally we did.”

The victory was a big boost for Michel, who has ridden in Europe and Japan and now is working to get entrenched in America. Gray’s Fable was her second North American victory and first stakes.

“He’s a really nice horse,” said Michel, who has been in America 2 1/2 months. “I’ve won in many different countries, so the United States for me was a big deal. I want to prove I can ride and win everywhere — and female riders can do it. So, yeah, it’s a really good winner.” She added with a laugh and big smile: “I hope many trainers now put me on their horse.”

All of the winners will get a serious look at corresponding stakes at Kentucky Downs for their next start, their connections said.