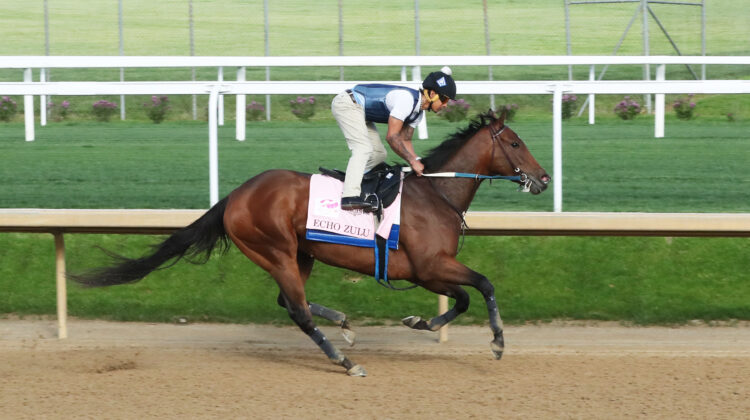 LOUISVILLE, Ky. (Wednesday, Sept. 21, 2022) – L and N Racing and Winchell Thoroughbreds’ three-time Grade I-winning filly Echo Zulu will make her first start since finishing fourth in this year’s $1.25 million Longines Kentucky Oaks (Grade I) when she goes to post as the likely favorite in Saturday night’s 42nd running of the $275,000 Dogwood (GIII) at Churchill Downs.

The seven-furlong Dogwood Stakes is part of a stakes quartet Saturday night for the Downs After Dark program. The first of 11 races will get underway at 6 p.m. (all times Eastern) and the Dogwood will go as Race 9 at 10:11 p.m. The supporting stakes on the card are the $275,000 Bourbon Trail, $275,000 Harrods Creek and $160,000 Seneca Overnight Stakes.

The daughter of Gun Runner returned as a 3-year-old where she held off Hidden Connection by a scant nose in the $400,000 Fair Grounds Oaks (GII). In the Kentucky Oaks, Echo Zulu pressed the early pace but was defeated three lengths by Secret Oath, Nest and Desert Dawn.

Echo Zulu was set to run in the $500,000 Acorn (GI) on the Belmont Stakes undercard but was a late scratch on the advice of the track veterinarian on the way to the starting gate.

The Dogwood will be the first time Echo Zulu will cut back to one turn since she won the Frizette on Oct. 3. Ricardo Santana Jr. will be aboard and will break from the rail.

Chief among Echo Zulu’s competitors in the Dogwood is her stablemate, multiple Grade II winner Wicked Halo. Owned by Winchell Thoroughbreds, Wicked Halo closed from just off the pace to win the $250,000 Prioress (GII) three weeks ago. Previously, the homebred daughter of Gun Runner scored a 4 ¾-length win in the $200,000 Tepin Stakes and a 2 ¾-length victory in the $160,000 Leslie’s Lady at Churchill Downs. As a 2-year-old, Wicked Halo won the $200,000 Adirondack (GII) at Saratoga. Jockey Tyler Gaffalione will retain the mount from post No. 7.

LBD Stable, Manganaro Bloodstock and David Ingordo’s Tarabi finished second to Echo Zulu in Spinaway and third in the Breeders’ Cup Juvenile Fillies. The Cherie DeVaux trainee will attempt to get revenge on her rival in the Dogwood out of post 4 with regular pilot Javier Castellano in the saddle. In her last start, Tarabi was victorious by three-quarters of a length in the $135,000 Wilton Stakes at Saratoga. She returned from New York after that win and sports two swift works at Keeneland– a :46.80 half-mile move on Sept. 6 and a 1:00.80 five-furlong breeze on Sept. 12.

Another top competitor in the Dogwood is Monarch Stables’ $100,000 Audubon Oaks winner Last Leaf. The Eddie Kenneally-trained daughter of Not This Time has seven lifetime victories but is searching for her first graded stakes score. Previously, Last Leaf was conditioned by Florida-based trainer Ron Spatz and was left in Kenneally’s care following the Audubon Oaks. When she was based in Florida, Last Leaf scored victories in the $75,000 Game Face Stakes and $75,000 Azalea Stakes. Last Leaf will be ridden by Rafael Bejarano out of post 6.

The Dogwood, named for the hardy blooming tree, comes six weeks in advance of the Breeders’ Cup Filly & Mare Sprint (GI), which is scheduled for Nov. 5 at Keeneland. Champion Covfefe won both races in 2019.

Warrior Johny demolished a field of seven in a first-level allowance at Saratoga. The Phil Bauer-trained son of Cairo Prince broke his maiden by 12 ¾ lengths on June 18 at Churchill Downs. Two weeks later, Warrior Johny returned in a first-level allowance beneath the Twin Spires and closed from 13 lengths off the early pace to finish just two lengths behind fellow Bourbon Trail rival Gilded Age. Jockey Joe Talamo will have the mount and break from post No. 4.

Hall of Fame trainer Todd Pletcher entered Saint Tapit in the Bourbon Trail to try two turns for the first time. Owned and bred byMandy Pope’s Whisper Hill Farm, Saint Tapit is out of Horse of the Year Havre de Grace. The regally-bred son of Tapit began his career June 26 at Belmont Park with a convincing four-length victory in a maiden special weight contest. Six weeks later, Saint Tapit scored a 1 ½-length first-level allowance win at Saratoga. Tyler Gaffalione will have the call from post 3.

Trained by Hall of Famer Steve Asmussen, Gunite was defeated 1 ¼ lengths by one of the nation’s best 3-year-olds, Jack Christopher, in the $500,000 H. Allen Jerkens Memorial (GI). Prior to that start, the son of Gun Runner narrowly defeated Accretive in the $200,000 Amsterdam (GII) and My Prankster in the $160,000 Maxfield Stakes. Last season, Gunite stormed home to a 5 ¾-length romp in the $300,000 Hopeful (GI). Gunite has only finished outside the Top 3 once when he was a disappointing fifth in the $500,000 Champagne (GI). Jockey Tyler Gaffalione will retain the mount from post No. 7.

Conagher faced Gunite last out in the Jerkens where he scampered to an early two-length lead from the rail but faded to fourth in deep stretch. The Mike Tomlinson-trained son of Jimmy Creed defeated Gunite four starts ago at Churchill Downs when he scorched seven furlongs in 1:20.62. Tomlinson tested Conagher at two turns following his aforementioned victory against Gunite but he tired late to finish second in the $250,000 Iowa Derby. Following the Iowa Derby, Conagher returned to sprinting and found the winner’s circle in the $100,000 Housebuster Overnight Handicap at Colonial Downs. Jockey Joe Rocco Jr. has been the regular pilot for Conagher for eight of his 10 starts and will have the call from post 4.

Trained by Brad Cox, Turnerloose has not found the winner’s circle since the Rachel Alexandra. The daughter of Nyquist finished fourth in the $400,000 Fair Grounds Oaks (GII) and seventh in the $1.25 million Longines Kentucky Oaks (GI). In her last two starts, Turnerloose competed on the turf where she finished second by a half-length in the $100,000 Centennial Distaff Turf Mile at Ellis and sixth in the $500,000 Dueling Grounds Oaks at Kentucky Downs. Turnerloose will be ridden byRicardo Santana Jr. from the rail.

Among the other combatants to Turnerloose in the Seneca is CHC Inc. and WinStar Farm’s Falconet, the recent runner-up finisher in the $225,000 Iowa Oaks (Grade III). Trained by Todd Pletcher, Falconet broke her maiden at second asking on April 21 at Keeneland. Six weeks later, the daughter of Uncle Mo won a first-level allowance event by 1 ¼ lengths under jockey Tyler Gaffalione at Churchill Downs. In the Iowa Oaks, Falconet disappointed as the 3-5 post time favorite and was defeated three lengths by the Kenny McPeek-trained Butterbean. Gaffalione will have the return mount and break from post No. 3.

DOWNS AFTER DARK: FIESTA UNDER THE SPIRES ON SATURDAY – The final Downs After Dark of the year will take place Saturday as Churchill Downs presents a night full of thrilling horse racing and a Latin-inspired celebration of live music, dance and art for “Fiesta Under the Spires.”

General admission to Downs After Dark is $14 and includes an official program. Guests under the age of 18 will only be admitted to the track if accompanied by a parent or adult guardian. Limited premium dining packages are available starting at $82 per person. Outdoor-third floor box seats are on sale for $17 per person. Reserved seating can be purchased online at www.ChurchillDowns.com/Tickets.

DOWN THE STRETCH – Racing continued Wednesday at Churchill Downs with a first post of 12:45 p.m. There was a $45,701 carryover in the 20-cent Derby City 6 jackpot that began in Race 4. … Kentucky Derby winner Rich Strike returned to Churchill Downs on Wednesday and recorded a five-furlong move in 1:01.40 in preparation for the $500,000 Lukas Classic (GII) on Oct. 1. … “Inside Churchill Downs” will return to the airwaves Friday. The one-hour program will air on ESPN 680/105.7and stream live on the station’s website at www.espnlouisville.com. … For more information about the Churchill Downs September Meet, visitwww.churchilldowns.com.