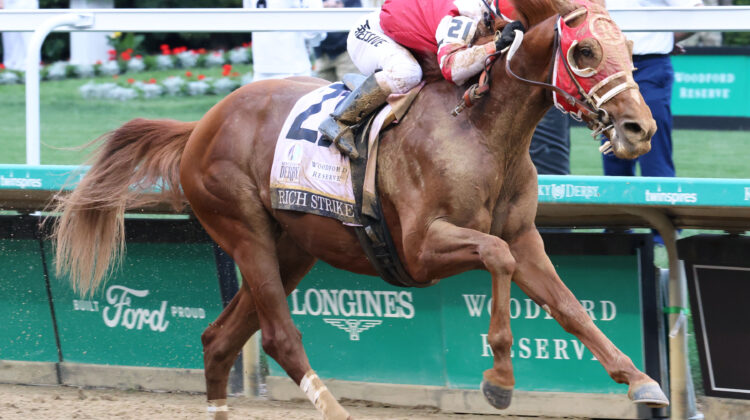 Overall, the six entrants in this year’s Lukas Classic have amassed 30 wins with combined purse earnings of more than $12.4 million. The race annually serves as a steppingstone to the $6 million Breeders’ Cup Classic (GI) to be held this year Nov. 5 at Keeneland.

Derby winners returning to Churchill Downs have been rare in recent decades. Mandaloun, promoted to first in the 2021 Kentucky Derby, finished fourth in this year’s Stephen Foster (GII). In 2018, the previous year’s Derby winner Always Dreaming concluded his career with a fifth-place finish in the Alysheba (GII). Mine That Bird, the 2009 upset winner, tried turf in the 2010 Firecracker (GII) but finished eighth. Giacomo, another big-price Derby winner in 2005, ran fourth in the 2006 Breeders’ Cup Classic (GI) at Churchill Downs.

A victory by RED-TR Racing’s Rich Strike in the Lukas Classic would make him the first Kentucky Derby winner to return to Churchill Downs and win since Silver Charm. The 1997 Derby winner took the 1998 Clark Handicap (GII) beneath the Twin Spires after runner-up finishes to Awesome Again in that year’s renewals of both the Stephen Foster Handicap (GI) and the Breeders’ Cup Classic (GI).

Rich Strike, the son of Keen Ice who scored an 80-1 shocking upset in the $3 million Kentucky Derby presented by Woodford Reserve (GI) in May, finished an enigmatic sixth in this year’s Belmont Stakes (GI) but rebounded with a respectable fourth in the Travers (GI) behindEpicenter, Cyberknife and Zandon. Trained by Eric Reed, Rich Strike is a perfect 2-for-2 at Churchill Downs. His regular rider Sonny Leon, now based in south Florida, will be in the saddle from post No. 4.

As a 3-year-old, Hot Rod Charlie was one of the country’s top sophomores. He finished second in the Kentucky Derby (GI) and Belmont Stakes (GI) and won the Pennsylvania Derby (GI). In the Breeders’ Cup Classic, Hot Rod Charlie was defeated just 4 ½ lengths by last year’s Lukas Classic winner Knicks Go. Jockey Tyler Gaffalione has the call in the Lukas Classic and will break from post 5.

Previously, the 5-year-old son of Bernardini was the 1 ½-length victor of last year’s Woodward Stakes (GI) at Belmont Park. The Lukas Classic will be Art Collectors fourth start of his 2022 campaign. In February, Art Collector finished 12th in the $20 million Saudi Cup (GI). Mott brought Art Collector back to the races in early August where he defended his title in the Alydar Stakes. Jockey Luis Saez will be in town to ride from post 2.

The aforementioned Happy Saver will attempt to get his revenge from the Whitney on Hot Rod Charlie in the Lukas Classic. Owned by Wertheimer and Frere (Alain and Gerard Wertheimer) and trained by Todd Pletcher, Happy Saver has finished second in his last five outings – the 2021 Jockey Club Gold Cup (GI) and Clark (GI) and this year’s Alysheba (GII), Metropolitan Handicap (GI) and the Whitney.

Happy Saver will be ridden by John Velazquez from post 3.

Trained by Bill Mott, Speaker’s Corner arrived at Churchill Downs on Wednesday morning from his main base at Saratoga Race Course. The 4-year-old son of Street Sense is a three-time graded stakes winner. He previously won the Fred Hooper (GIII) and Gulfstream Park Mile (GII) earlier this year. Three starts ago, Speaker’s Corner finished third to the world’s top-rated horse,Flightline, in the Metroplitan Handicap. In his last start, Speaker’s Corner was the even-money favorite in the Pat O’Brien (GII) but faded to fourth after dueling on the pace in the early stages of the Aug. 27 race. Junior Alvarado will have the mount in the Ack Ack and will break from the rail.

The Ack Ack Stakes is named after the 1971 Horse of the Year. That same year, Ack Ackalso received championship honors as Champion Older Horse and Champion Sprinter. As a 3-year-old, Ack Ack won the 1969 Derby Trial – his lone start at Churchill Downs – in 1:34.40, which was a track record at the time for the one-mile distance.

DOWN THE STRETCH – Racing continued Wednesday at Churchill Downs with a first post of 12:45 p.m. There was a $13,949 carryover in the 20-cent Derby City 6 jackpot that began in Race 4. … Jockey Florent Geroux and agent Doug Bredar have split after 13 years together. Geroux will be represented by John Panagot after this year’s Breeders’ Cup World Championships. … Jockey Adam Beschizza has hired a new agent. He’ll now be represented by Joe Paulley. Beschizza was previously represented by Liz Morris. … Jockey Tyler Gaffalione served a one-day suspension Wednesday for a whip violation. He’s scheduled to return Thursday. … “Inside Churchill Downs” will air Friday and preview Saturday’s Lukas Classic (GII) and Ack Ack Stakes (GIII). The one-hour program will air on ESPN 680/105.7 and stream live on the station’s website at www.espnlouisville.com. … For more information about the Churchill Downs September Meet, visit www.churchilldowns.com.