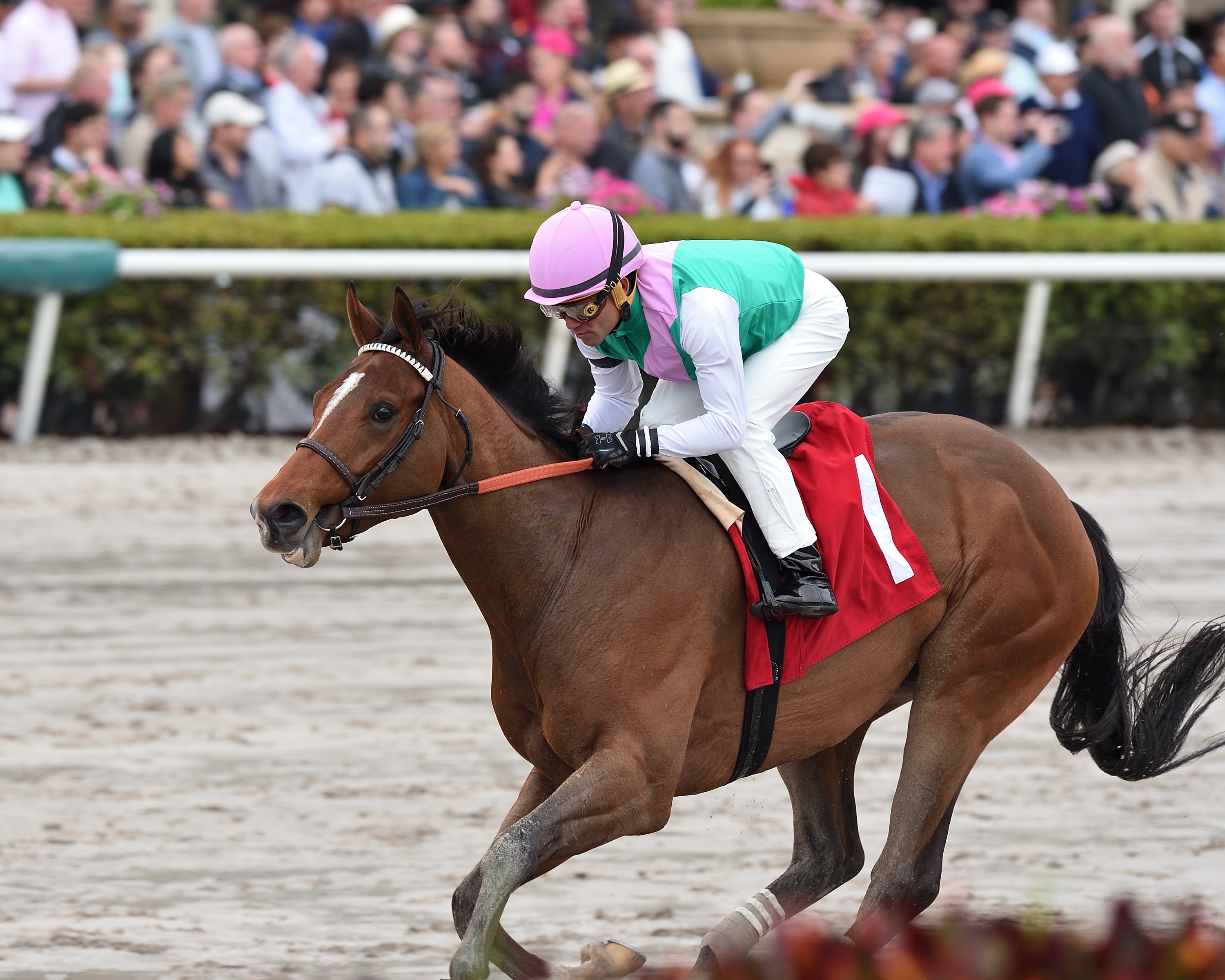 LOUISVILLE, Ky. (Thursday, Feb. 28, 2019) – Following a week of minimal action on the Road to the Kentucky Derby, the Championship Series returns Saturday with all eyes focused on the $400,000 Fountain of Youth (Grade II) at Gulfstream Park. 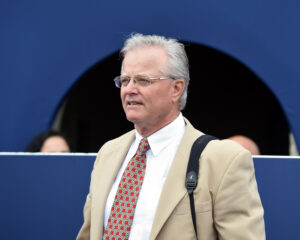 The 73rd renewal of the Fountain of Youth – the second of 16 Championship Series races on the Road to the Kentucky Derby Presented by Woodford Reserve – will award 85 points to the Top 4 finishers: 50 to first, 20 to second, 10 to third and 5 to fourth.

Impressive debut winner Hidden Scroll is the 9-5 favorite in the field of 11 that also attracted stakes winners Vekoma and Signalman.

On Friday, trainer Aidan O’Brien has a pair of Triple Crown nominees – favored Western Australia (IRE) and second-choice Van Beethoven – entered in the Patton at Ireland’s Dundalk, which offers 20-8-4-2 points on the European Road to the Kentucky Derby.

Later Friday afternoon, a pair of first-level allowances could produce starters in next-round preps. Mucho is odds-on in a six-furlong sprint at Gulfstream. Roadster, Dessman and Nolo Contesto are entered to race one mile at Santa Anita.      There’s only one race this week on Road to the Kentucky Oaks. Champion 2-year-old filly Jaywalk is the 2-5 favorite in the Gulfstream Park’s Grade II, $200,000 Davona Dale (Race 12 at 5:01 p.m.).

The 145th runnings of the $1.25 million Longines Kentucky Oaks (GI) for 3-year-old fillies at 1 1/8 miles and $3 million Kentucky Derby Presented by Woodford Reserve (GI) for 3-year-olds at 1 ¼ miles will be staged at Churchill Downs in Louisville, Ky. in nine weeks on Friday, May 3 and Saturday, May 4, respectively. – Darren Rogers

A Road to the Kentucky Derby series qualifier, the 1 1/16-mile Fountain of Youth awards a total of 85 points to the top four finishers (50-20-10-5 scale) and Hidden Scroll has been tabbed as the 9-5 morning line favorite against 10 rivals.

A Juddmonte Farms homebred, Hidden Scroll was overlooked at 8-1 when opening his career in a one-mile maiden special weight on the Jan. 26 Pegasus World Cup undercard at Gulfstream. The Bill Mott-trained colt showed speed from the start, widening his advantage at every point of call, and drew off spectacularly to a 14-length decision. Hidden Scroll registered a field-best 102 BRIS Speed rating and Joel Rosario retains the mount on the son of 2007 Kentucky Derby runner-up Hard Spun.

Vekoma will make his first attempt in a Kentucky Derby qualifier. The promising Candy Ride colt won both starts last year, including a 1 ¾-length victory in the Nashua (GIII) at Aqueduct in November, and will open his 3-year-old campaign with first-time Lasix. George Weavertrains from R.A. Hill Stable and Gatsas Stables and regular rider Manny Franco will be in from New York for the assignment.

Signalman showed an affinity for Churchill Downs last fall, recording a rallying third in the Breeders’ Cup Juvenile (GI) and a victory in the Kentucky Jockey Club (GII), and makes his anticipated 3-year-old bow Saturday. A $32,000 yearling purchase, Signalman has already earned nearly $450,000 for his connections and is conditioned by Kenny McPeek. Brian Hernandez Jr. guides the early 9-2 third choice.

Everfast merits consideration following a runner-up effort in the Feb. 2 Holy Bull (GII) at 128-1 odds. Chris Landeros has the call for Dale Romans. Code of Honor, runner-up in the Champagne (GII) two back, will seek to rebound after finishing fourth as the favorite in the Jan. 5 Mucho Macho Man. John Velazquez rides for Kentucky Derby winner Shug McGaughey. Holy Bull fourth-placer Epic Dreamer is also part of the mix.

BALLYDOYLE CONTINGENT TOPS FRIDAY’S PATTON STAKES – With three races remaining on the European Road to the Kentucky Derby, Friday’s Patton Stakes at Dundalk Stadium in Ireland could serve as a major key prep for a trio of Aiden O’Brien trainees that were entered in the one-mile race.

Carded as Race 6 with a scheduled post time of 2:45 p.m. EST, the eight-horse field is led by Group I-placed, and Triple Crown nominated,Western Australia who is owned by arguably the industry’s most notable partnership of Derrick Smith, Mrs. John Magnier and Michael Tabor. The Irish-bred son of Australia previously finished third in the Oct. 27 Vertem Trophy (GI).

Joining Western Australia in the field is stablemate Van Beethoven – a possible contender for the March 30 UAE Derby (GII). Van Beethoven, who also is Triple Crown nominated, won the Railway Stakes (GII) last summer at the Curragh. The son of Scat Daddy will be ridden by O’Brien’s go-to rider Ryan Moore.

Also entered in the race from O’Brien’s yard is maiden winner Albuquerque (IRE). The colt by Galileo also is nominated to the UAE Derby.

Last year, the Patton Stakes was won by Kentucky Derby contender Mendelssohn prior to his runaway UAE Derby victory.
For more information on the Patton Stakes, visit: http://bit.ly/2EiH2il. – Kevin Kerstein

CHAMPION JAYWALK RETURNS FOR 3-YEAR-OLD DEBUT IN SATURDAY’S DAVONA DALE – Champion Jaywalk is set to make her 3-year-old debut at Gulfstream Park on Saturday against six rivals in the $200,000 Davona Dale (Grade II) – a Road to the Kentucky Oaks Championship Series race.

Jaywalk, the winner of the Breeders’ Cup Juvenile Fillies (GI) in November at Churchill Downs, was made the heavy 2-5 morning line favorite in the one-mile race. Owned by D J Stable and Cash is King LLC and trained by John Servis, Jaywalk has won four races in a row including the Grade I Frizette Stakes in early October at Belmont Park.

UPCOMING ROAD TO THE DERBY RACES

# Japan Road to the Kentucky Derby

* European Road to the Kentucky Derby

ROAD TO THE KENTUCKY DERBY TOP 25

Brisnet.com Fountain of Youth Past Performances

Road to the Kentucky Derby Leaderboards

·     The Champion Juvenile of 2018, Game Winner, is scheduled to make his 3-year-old debut in next Saturday’s San Felipe (Grade II) at Santa Anita. The talented colt, trained by Hall of Famer Bob Baffert and owned by his longtime clients Gary and Mary West, is undefeated through four starts including a trio of Grade I victories in the Del Mar Futurity, American Pharoah and Breeders’ Cup Juvenile.

·     Owner information: Gary and Mary West are one of the most iconic couples in horse racing. The Wests have been married for 50 years and live in San Diego, Calif. The couple started the telecommunications company West Corp. in 1986. The company, which was founded in Omaha, Neb., eventually became public in 2013 and had a valuation of $5.2 billion. The Wests began their involvement in horse racing in 1980 with trainer Ben Glass. The Wests’ stable began to expand in the early 1990s and they had their first Kentucky Derby starter, Rockamundo, in 1993. The Wests have campaigned multiple Grade I winners including Book Review, New Year’s Day, Power Broker and West Coast.

Maximus Mischief will be given time off at Eisaman Equine near Ocala, Fla., according to trainer Butch Reid. – Kevin Kerstein

VELAZQUEZ FOUNTAIN OF YOUTH DOMINANCE – Hall of Fame rider John Velazquez could pass Jerry Bailey for the most wins by a jockey in the Fountain of Youth (Grade II) with a victory by Code of Honor.

Velazquez and Bailey are both tied with four victories through 73 runnings of the 1 1/16-mile Road to the Kentucky Derby Championship Series race. Velazquez won the Fountain of Youth in 2007, ’09-10 and ’13 while fellow Hall of Famer Bailey, now retired and an analyst withNBC, won the race in 1980, ’98 and 2004-05. – Kevin Kerstein

DERBY WINNERS PRODUCED FROM THE FOUNTAIN OF YOUTH – There have been 13 Kentucky Derby winners who have exited the Fountain of Youth – most recently Orb in 2013.

ANOTHERTWISTAFATE EYES SUNLAND DERBY – El Camino Real Derby winner Anothertwistafate will attempt to transfer his synthetic form to the dirt in the March 24 Sunland Derby (Grade II), according to his trainer Blaine Wright.

The colt by Scat Daddy has romped in three of four lifetime starts by a combined 16 lengths. Anothertwistafate’s lone dirt start was his debut on Nov. 3 at Santa Anita where he had an enigmatic ninth-place effort. – Kevin Kerstein

Roadster, the 7-5 morning line favorite for Hall of Fame trainer Bob Baffert, dazzled in his maiden-breaking performance in July at Santa Anita. Following his third-place effort behind eventual champion and stablemate Game Winner in the Del Mar Futurity, Roadster received a 60-day layoff. Friday would mark his first start in nearly six months.

Also entered in the race is Roadster’s stablemate Dessman (9-5) who recently finished second to Sparky Ville in the seven-furlong San Vicente (GII). Friday’s race would be the first start around two turns for the son of Union Rags.

The allowance race is carded as Race 8 of 9 at Santa Anita with a scheduled post time of 7:53 p.m. EST. – Kevin Kerstein

HOPEFUL RUNNER-UP MUCHO RETURNS IN FRIDAY ALLOWANCE AT GULFSTREAM – Promising colt Mucho, arguably one of the most impressive maiden winners over the summer at Saratoga and the runner-up in the Hopeful Stakes (Grade I), is scheduled to make his 3-year-old debut in a six-furlong allowance race Friday at Gulfstream Park.

Owned by Claiborne Farm and Adele B. Dilschneider and trained by Hall of Famer Bill Mott, Mucho won his second-career start by 9 ¾ lengths and finished three-quarters of a length behind Mind Control in the Hopeful.

Friday’s first-level allowance, which drew a field of five, is carded as Race 2 with a scheduled post time of 1:05 p.m. EST. – Kevin Kerstein

Spanish Mission, owned in partnership by Kentucky Derby-winning owners Team Valor International along with Erle Mack, won a Class 3 conditions stakes Nov. 10 at Chelmsford City for trainer David Simcock. Jockey Jamie Spencer is expected to pick up the mount on the son of Noble Mission (GB).

Also pre-entered in the race is UAE Derby (GII) nominee Blenheim Palace (IRE) for Mrs. John Magnier, Michael Tabor and Derrick Smith. The regally-bred colt by Galileo (IRE) is 0-3 in his career.

Entries will be finalized Tuesday and can be viewed at: http://bit.ly/2EE1pYH. – Kevin Kerstein 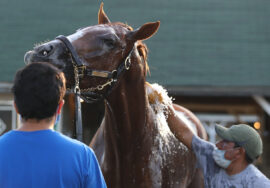 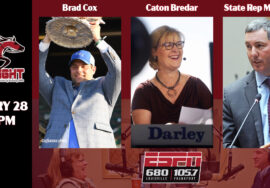 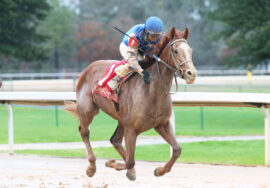 Cohen hoping McPeek-trained Dash Attack gets him back to Derby 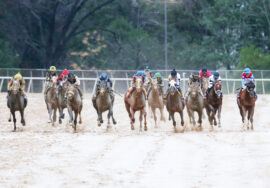 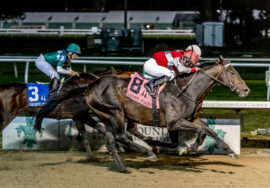 Call Me Midnight wins Lecomte at 28-1 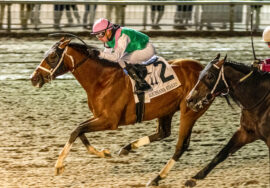 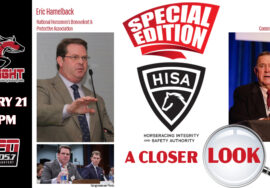