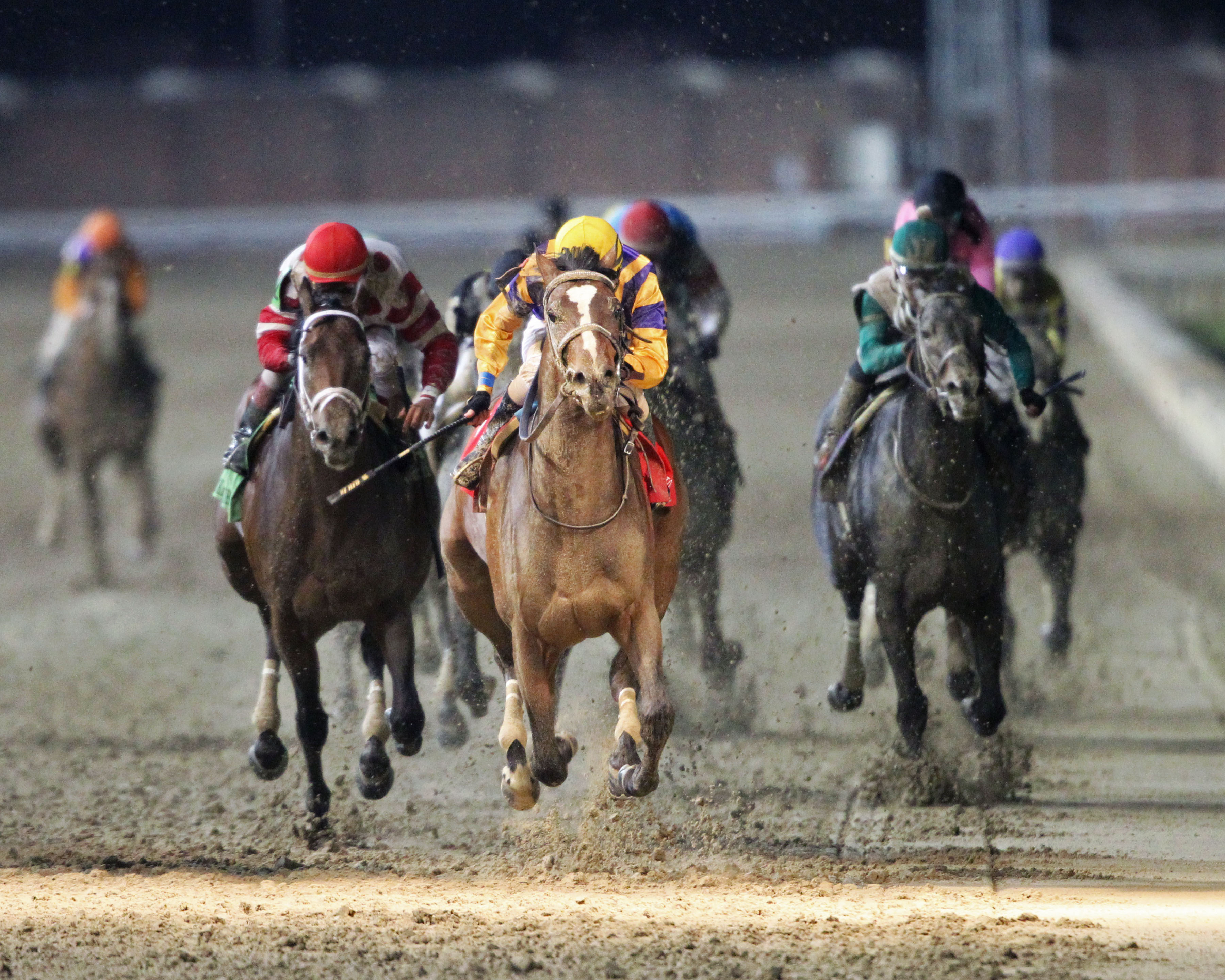 HALLANDALE BEACH, FL – Saturday’s $400,000 Xpressbet.com Fountain of Youth (G2) will pit experience against potential Saturday at Gulfstream Park, where graded-stakes winner Signalman will make his 2019 debut in a talent-rich field of 11 3-year-olds that will include several less accomplished but nevertheless brilliant contenders. 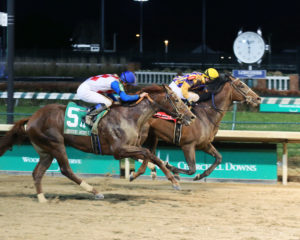 The Fountain of Youth, the key prep for the $1 million Xpressbet.com Florida Derby (G1) March 30, will headline a 14-race program with nine graded stakes, including the $200,000 Davona Dale (G2) for 3-year-old fillies, featuring the 2019 debut of Jaywalk, the 2018 Breeders’ Cup Juvenile Fillies (G1) winner who won the Eclipse Award as 2-year-old filly champion of 2018.

Signalman’s body of work during his juvenile season is beyond compare among his Fountain of Youth rivals. Owned by Tommie M. Lewis, David A. Bernsen, LLC and Magdalena Racing, the 3-year-old son of General Quarters concluded his 2018 campaign with a victory in the Kentucky Jockey Club (G2) at Churchill Downs at the Fountain of Youth distance of 1 1/16 miles, three weeks after closing from 12th to finish third in the $2 million Breeders’ Cup Juvenile (G1) at the home of the Kentucky Derby (G1).

“I think my colt, Signalman, is certainly the most experienced at the highest level. He’s already beaten some of them that are running back in there and there are other ones that are unknown quantities,” trainer Kenny McPeek said. “But you got to get them ready and bring them over there and get the job done. I’m pretty confident going over there, but we’ll find out Saturday.”

Signalman finished a late-closing second in his May 17 five-furlong debut at Churchill behind Sir Truebadour, who went on to win the Bashford Manor (G3) two races later. Signalman returned to capture a seven-furlong maiden special weight race at Saratoga Sept. 1 before finishing second in the Breeders’ Futurity (G1) at Keeneland, taking third in the Breeders’ Cup Juvenile and winning the Kentucky Jockey Club.

“In his first race he was second going five furlongs at Churchill. For a big horse, that is a lot to overcome. He’s been a nice horse from the beginning. When he broke his maiden at Saratoga, we knew we were on to something,” McPeek said. “Since then, since we’ve stretched him out, he’s done everything right.”

Brian Hernandez Jr. has the return mount aboard Signalman.

Hidden Scroll caught the bettors by surprise when he registered a 14-length front-running victory at 8-1 odds, but trainer Bill Mott was only surprised by how utterly dominant the homebred son of Hard Spun proved to be while running a mile over a sloppy track in 1:34.82.

“It was a surprise he won as easily as he did, but I think we were excited and high on him going into the race,” Mott said. “I don’t think it was any surprise to us that he won, but the way he won in the fashion that he won was a bit of a surprise and awesome, to put it mildly.”

Joel Rosario has the return mount aboard Hidden Scroll.

If Hidden Scroll’s stakes debut is the most anticipated among the least experienced Fountain of Youth entrants, Global Campaign’s entry into stakes competition may well be the second-most awaited.

Owned by Sagamore Farm LLC and WinStar Farm LLC, the son of Curlin has produced two brilliant victories to launch his career during Gulfstream’s Championship Meet. The Kentucky-bred colt debuted with a 5 ¾ lengths at seven furlongs Jan. 5 before taking a 1 1/16-mile optional claiming allowance by 2 ¼ lengths a month later.

“I don’t know how many are going to be in there, but I would like to get a decent post, and I don’t want to run on a sloppy racetrack but I would like to run here if we could,” trainer Stanley Hough said. “He’ll definitely be prepared to run if that’s what we decide to do.”

Bourbon Lane Stable and Lake Star Stable’s Bourbon Lane also registered an eye-opening performance at Gulfstream Park in his most recent start. The son of Tapit captured a 1 1/16-mile optional claiming allowance Jan. 18 by a going-away 2 ¼ lengths in 1:43.54.

The Mark Hennig-trained colt previously won his Nov. 14 debut at Aqueduct over next-out winner Moretti by 2 ¼ lengths. He returned to finish a wide fourth under Irad Ortiz Jr. in the Remsen (G2) at Aqueduct Dec. 1.

“He has a competitive nature. But also he has a good mind. Since he ran that first time, it’s like he’s just waiting for the rider to tell him what to do next,” Hennig said. “I think Irad rode him that way. If you go back, he gave him a little extra education in the Remsen, which benefited us in the last race.”

Hennig is hopeful Bourbon War will make good strides on the Road to the Triple Crown in  the Fountain of Youth, which offers qualifying points (50-20-10-1) for the May 4 Kentucky Derby.

“We’d like to see another move forward and pick up some points in the process. That would be the goal,” Hennig said.

Ortiz has the mount.

“This looks like a contentious race with some good horses in there. I guess we’re going to find out where we stand,” Weaver said. “We’ve had a little time off, now we’re ready to get back in action.

Vekoma will make his first start around two turns Saturday.

“We have to ask him the question. It’s that time of year. He’s a very talented horse and we need to find out whether we’ll be headed to the Derby,” Weaver said. “He’s a good colt. If he can get a mile and a sixteenth, we’ll take on a mile and an eighth and see how he does that.”

Manuel Franco has the return mount.

Grade 1 stakes-placed Code of Honor will seek to rebound from a disappointing effort in the Jan. 5 Mucho Macho Man at Gulfstream Saturday. W.S. Farish’s homebred son of Noble Mission had a troubled start before turning in a flat fourth in the mile Mucho Macho Man.

“I thought maybe he needed the race. He’s never been a really big-statured horse, so I never trained him hard. I just made up my mind that I was going to get into him and see if he could take it physically. So far, he has,” said Hall of Fame trainer Shug McGaughey, who saddled Orb for a victory the 2013 Fountain of Youth on his way to triumphs in the Florida Derby and the Kentucky Derby (G1). “I think he’s had a good two months.”

Code of Honor had raced twice previously, registering a front-running victory at six furlongs in his Aug. 18 debut at Saratoga and recovering from a stumbling start to finish second in the mile Champagne (G1) at Belmont Oct. 6.

Calumet Farm’s Everfast will seek to improve on a second-place finish in the Feb. 2 Fasig-Tipton Holy Bull (G2) at Gulfstream Saturday. The Dale Romans-trained colt made a late surge after stalking the pace to finish just a length behind Harvey Wallbanger at 1 1/16 miles. The son of 2012 Florida Derby winner Take Charge Indy took bettors by surprise, going to post for his seventh career start at 128-1

“He surprised me. He surprised me that he lost. That was the only surprise that I saw. I was disappointed coming out of it,” said Romans, who saddled Promises Fulfilled for an 18-1 upset victory in last year’s Fountain of Youth. “I thought he would win. He just seems good. He acts like he’s better than the races beforehand and I thought he’d run a big race, and he did.”

Everfast, who will once again be ridden by Chris Landeros, had finished off the board in his three previous graded-stakes starts in the Bashford Manor, Breeders’ Futurity and Kentucky Jockey Club.

Reeves Thoroughbred Racing and William Branch’s Frosted Grace will stretch out around two turns for the first time in the Fountain of Youth. The son of Mark Valeski broke a step slowly from his rail post position and finished fifth in the Feb. 2 Swale (G3) at seven furlongs.

Epic Dreamer, who finished second behind Vekoma in his debut and tired while finishing fourth in the Holy Bull; Gladiator King, a six-furlong stakes winner at Tampa Bay Downs four starts back; and Union Destiny, who finished third in the Dec, 8 Smooth Air; round out the field.