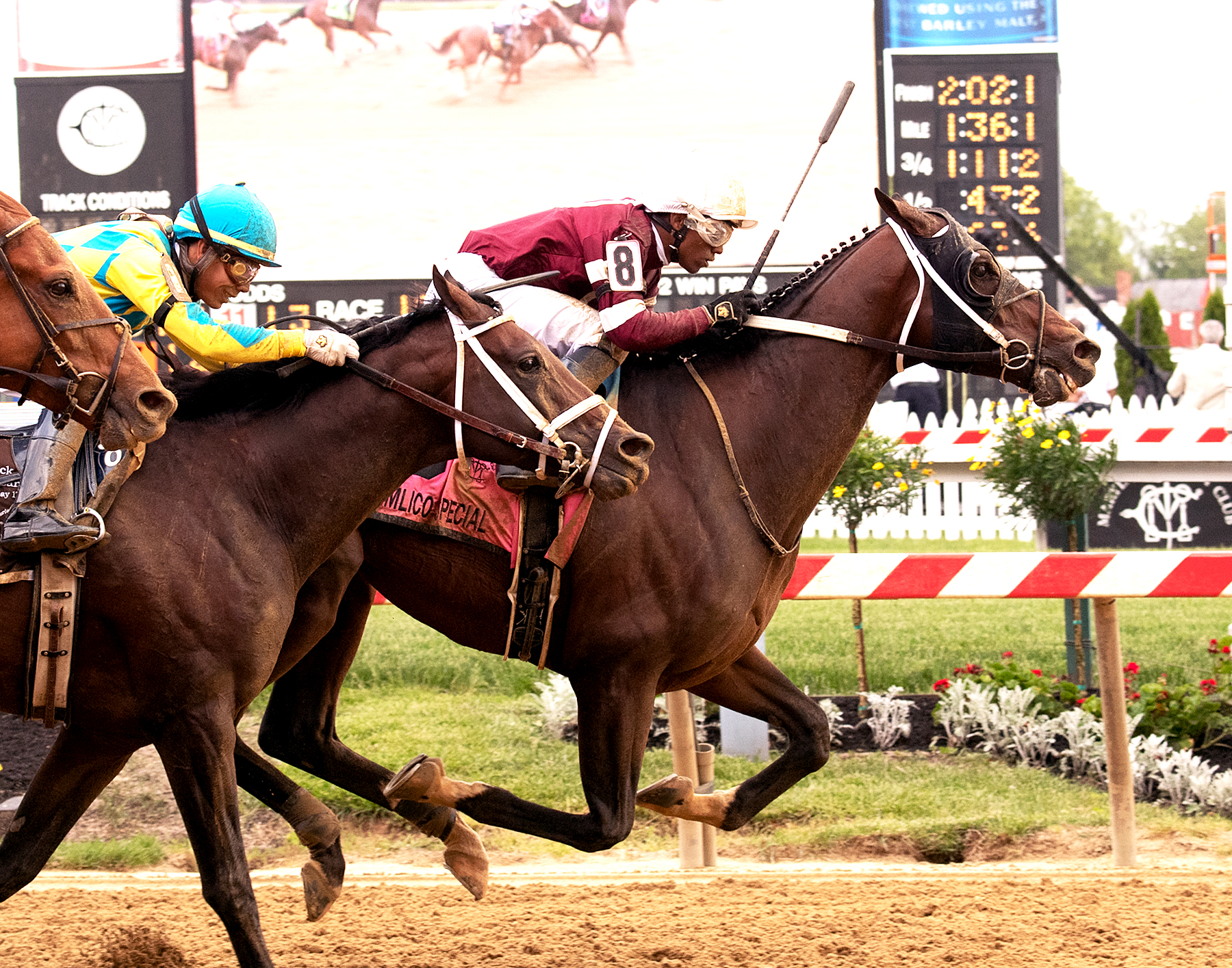 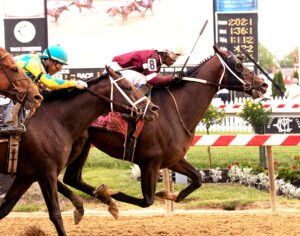 “It really wasn’t until Monday when I made the decision to run him (at Churchill),” Hall of Fame trainer Steve Asmussen said. “I toyed with the idea of running him in the Jockey Club Gold Cup (GI) knowing he likes the extra distance. Originally, I thought that race would have a couple more horses enter and that’s why I didn’t decide until Monday to run him in the Lukas Classic.

“He’s a big-leggy horse. He is good enough, he just needs to put it all together. I was extremely relieved when he won the Pimlico Special.”

Tenfold, a son of the former Asmussen-trainee Curlin, won the $300,000 Pimlico Special (GIII) in mid-May but has since run sub-optimal efforts in the $600,000 Stephen Foster (GII) and $1 million Pacific Classic (GI). Asmussen’s go-to rider Ricardo Santana Jr. will ride the homebred from post 6 at morning line odds of 6-1.

The 5-2 morning line favorite in the Lukas Classic is WinStar Farm, China Horse Club International and SF Racing’s multiple graded stakes winner Quip, who arrived to Churchill Downs on Thursday morning from trainer Rodolphe Brisset’s base at Keeneland. Quip was the narrow runner-up finisher behind Seeking the Soul in the Stephen Foster (GII) in June.

Presented by Budweiser, the theme for Saturday night’s Downs After Downs event is “Bourbon & Beats.” Guests are encouraged to wear shades of purple and stay on trend with autumn fashion as they celebrate a pairing of Kentucky sounds and spirits. Admission gates open Saturday at 5 p.m. and the final race of the evening is scheduled for 11:10 p.m. General admission is $12 and reserved seat packages start at $27, which are available for purchase on www.ChurchillDowns.com.

The National Weather Service forecast for Louisville calls for mostly sunny skies with a high near 90. 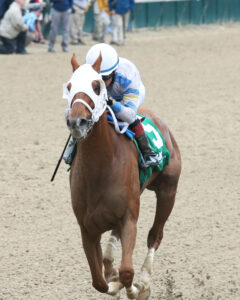 Thirstforlife, who is owned by Hawley, finished fifth in the Sept. 15 $600,000 Stephen Foster (GII) and enters the Ack Ack following an eventful trip in the $100,000 Schaefer Memorial at Indiana Grand.

“He simply stumbled at the start and lost Martin (Chuan) right as they hit the bell,” Hawley said. “Thankfully everyone was fine but it was a bummer.

“I think this race is the perfect spot for him and should set up well going the one-turn mile.”

Timeline, a 5-year-old son of Hard Spun will run for the first time under trainer Steve Asmussen’sname following his transfer from Chad Brown’s barn. The chestnut horse did not debut until he turned 3-years-old but quickly made his mark by winning his first four starts of his career including back-to-back Grade III scores in the $200,000 Peter Pan and $100,000 Pegasus. The Ack Ack will be Timeline’s first start in 2019.

Ricardo Santana Jr. will be in the irons for Timeline from post 8.

Olympic Village will scratch from the Ack Ack in favor of the $750,000 Jockey Club Gold Cup (GI) at Belmont Park, according to Assistant Racing Secretary and Stakes Coordinator Dan Bork.

The race is one of three stakes events scheduled on the penultimate racing program of the track’s 11-day September Meet. Also on the Saturday schedule are the $250,000 Lukas Classic (GIII), a 1 1/8-mile race for 3-year-olds and up, and the $125,000 Jefferson Cup (Listed), a 1 1/8-mile event for 3-year-olds on the Matt Winn Turf Course. The Ack Ack is carded as the seventh of 11 races on the program that begins at 6 p.m. (all times Eastern). Post time for the Ack Ack is scheduled for 9:05 p.m.

NAFZGER BACK IN CHURCHILL WINNERS CIRCLE FOR FIRST TIME IN NEARLY FIVE YEARS –Hall of Fame trainer Carl Nafzger has been in “semi-retirement” for more than 10 years but the veteran horseman still has one stall assigned to him in trainer Ian Wilkes’ barn. Sunday, the Kentucky Derby-winning conditioner returned to the winner’s circle at Churchill Downs for the first time since Nov. 30, 2014 with $20,000 maiden claimer Broadway Diner.

Nafzger, who won the 1990 Kentucky Derby with Unbridled, celebrated with friends and family Sunday when Randy Bloch, John Seiler, Robert Manfuso and Wanda Nafzger’s homebred filly broke her maiden in Race 8 – a $20,000 maiden claimer for fillies and mares 3-years-old and up.

“One of the big topics in my book ‘Traits of a Winner’ is dropping horses $20,000 or more in class makes them exude confidence,” Nafzger said. “This was the case with Broadway Diner. She had all the confidence in the world against this competition and it was great to see her breakthrough.”

This was Nafzger’s first win since Oct. 26, 2016 at Keeneland. Nafzger still has his presence felt in the morning at Churchill Downs and regularly helps his former pupil Wilkes around the barn.

Will Broadway Diner’s win encourage the 78-year-old to come out of semi-retirement?

“One horse is plenty,” Nafzger joked. “As long as my wife (Wanda) wants to stay involved in ownership, I’ll keep applying for my one stall.”

SINGLE 6 JACKPOT MANDOTRY PAYOUT SATURDAY – Churchill Downs’ 20-cent Single 6 Jackpot, which totaled $63,034 at the start of Thursday’s eight-race program, will be paid out on Saturday night after the Louisville racetrack received permission from the Kentucky Horse Racing Commission on Thursday.

Churchill Downs Racetrack officials made the special request to move up the mandatory jackpot payout one day to give horseplayers a chance to focus solely on Churchill Downs nighttime card and avoid head-to-head competition with Gulfstream Park’s similar jackpot mandatory payout on Sunday.

Saturday night’s mandatory Single 6 Jackpot payout – part of a spectacular evening of racing under the lights for “Downs After Dark” presented by Budweiser – will span Races 4-9 starting at 7:26 p.m. (all times Eastern). The first of 11 races on the night is 6 p.m.

A total of 59 horses are scheduled to compete in the six-race sequence for an average of 9.8 horses per race.

The multi-race wager begins in Race 4 with a seven-furlong, $95,000 maiden special weight for 2-year-old fillies. The field of 10 is led by 2-1 morning line favorite Weekend Fun, who returns to dirt following an unsuccessful 11th-place effort at Kentucky Downs.

In Race 5, a one-mile conditioned turf allowance for 2-year-old fillies worth $97,000, the wide-open field of 10 is led by 3-1 favorite Battleofwinterfell, who won at first asking for trainer Mark Casse and finished third in the $500,000 Kentucky Downs Juvenile Fillies.

Race 6 continues with a highly-competitive field of 12 3-year-olds and up running for the $95,000 maiden special weight condition at 1 1/16 miles. The lukewarm 7-2 morning line favorite is Pintxos, who finished second on debut at Ellis Park and fifth last out at Kentucky Downs for trainer Brendan Walsh.

The penultimate leg, the $125,000 Jefferson Cup (Listed), is a field of eight 3-year-olds running 1 1/8 miles on the Matt Winn Turf Course with tepid 3-1 morning line favorite Tracksmith, who recently finished fourth in the $250,000 Virginia Derby (GIII).

The sequence will close with the featured event of the evening, the Lukas Classic, featuring a field of 10 older horses led by 5-2 morning line favorite Quip. Post time for the Lukas Classic is 10:11 p.m.

The Single 6 Jackpot challenges bettors to have a single winning wager with six winners placed at the required minimum bet value in order to take down the jackpot. If there are multiple winning tickets, 90 percent of the day’s pool will be paid out while 10 percent will carry to the next live race day. If there are no tickets will all six winners, 100 percent of the pool will carry to the Single 6 Jackpot.

The entire Saturday night pool will be paid to the most winners of six races.

As part of Sunday’s Closing-Day program, the Single 6 will still be offered and will feature a mandatory payout.

Trained by Joe Sharp, Tracksmith recently finished fourth in the $250,000 Virginia Derby (GIII) at Colonial Downs. The son of Street Sense won the $75,000 Frisk Me Now Stakes in July at Monmouth.Adam Beschizza has the call from post 6.

DOWNS AFTER DARK ON SATURDAY; BOURBON & BEATS IS THEME – The $250,000 Lukas Classic presented by Budweiser (Grade III), along with the $150,000 Ack Ack presented by GE Appliances (GIII) for milers and $125,000 Jefferson Cup (Listed) for 3-year-olds at 1 1/8 miles on turf are the featured events on Saturday night – the lone Downs After Dark Presented by Budweiser night racing event of the September Meet and last one of the year. The event theme that evening will be Bourbon & Beats and guests are encouraged to wear shades of purple and stay on trend with autumn fashion as they celebrate a pairing of Kentucky sounds and spirits.

The evening’s entertainment highlights include a Silent Disco where guests can dance to music through wireless headphones in the Plaza featuring GlitterTitz DJZ, DJ S.Y.I.M.O.N.E and DJ Matt Anthony.

For more information and to purchase tickets, visit www.churchilldowns.com.

DOWNS THE STRETCH – There is a $63,034 carryover in the 20-cent Single 6 Jackpot Thursday evening that will span Races 3-8. First post for Twilight Thursday Presented by Blue Moon is 5 p.m. The evening features $1 Blue Moon drafts and select domestic beers, food trucks, and live music from Owoso. … Jockey Tyler Baze will shift his tack back to California beginning next week, according to his agent Vic Stauffer. … “Inside Churchill Downs” will air Friday at 6 p.m. on ESPN 680/105.7. The one-hour horse-racing program will feature a preview of Saturday’s 11-race program. Those outside the Louisville area can listen atwww.espnlouisville.com. … Sunday is the Stakes and Eggs Brunch in the Stakes Room. Tickets for the all-inclusive buffet can be purchased at www.churchilldowns.com.