HOT SPRINGS, AR (Monday, Feb. 17, 2020) – Ed and Susie Orr’s Silver Prospector rebounded from a fourth in the opening day Smarty Jones Stakes to secure his position as a leading Kentucky Derby contender with a one-length victory in Monday’s $750,000 Southwest Stakes (G3) before a crowd of 19,500. 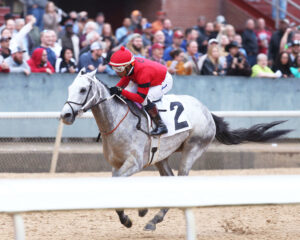 Silver Prospector broke near the back of the field, but was eager to run and moved into third through the first turn as Wells Bayou led through fractions of :22.89 and :46.60 for the first half mile. The winner moved closer to the front entering the home stretch and wore the down the pace setter to win by a length in 1:43.01 for 1 1/16 miles over a fast track.

“His position was by design,” said winning trainer Steve Asmussen. “I thought he got a little too far behind in the Smarty Jones. He was in good position all the way. Absolutely, we’ll look at the Rebel (March 14) and Arkansas Derby (April 11). This series is quite lucrative and the points are very important.”

Said jockey Ricardo Santana Jr.:  “The last two weeks the horse was training unbelievable! We didn’t get any rain so the track was just how he liked it. He pulled me in a great spot the first quarter, and i just became his passenger.”

Answer In was third. He was followed by Shoplifted, Taishan, Villainous, American Butterfly, Chase Tracker, and Gold Street. 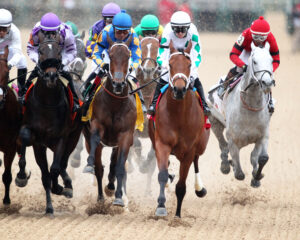 “I was proud of both horses,” said Brad Cox, trainer of Wells Bayou and Answer in. “They ran extremely well. Obviously, set some nice hot fractions, or some hot fractions, and was able continue with a nice run down the lane. I was very pleased with them both. We’ll regroup with them and see what’s next.”

Silver Prospector, who has now won three of eight starts, earned 10 points towards Kentucky Derby eligibility to add to his other 12 points and is now ranked sixth on the list with 21 total points. Silver Prospector won Churchill Downs’ Grade 2 Golden Rod Stakes last fall after finishing third in Churchill’s Street Sense Stakes, which followed a Keeneland maiden victory and off-the-board finish on grass at Kentucky Downs.

“I think we were pretty reserved today,” said winning owner Ed Orr. “We had a lot of information that he was doing good. We were disappointed in the fourth-place finish in the Smarty Jones and thought that we could have done better there. We’ve learned a long time ago in this business to not get your hopes too high because they can be shot down pretty fast.”

“I went a touch quicker than what I wanted to,” jockey Florent Geroux said Wells Bayou. “My horse ran hard even when the other one came by me, he was trying really hard. It was a great race. It was his first time against stakes company and the winner was a Grade 2 winner.”