Fancy Liquor, bred and owned by Louisville Ky.-based Skychai Racing and partners, had a very good 3-year-old season in 2020 for trainer Mike Maker. The son of Lookin at Lucky won three of eight starts – topped by a victory in the American Turf (G2) – and earned $497,187. His run of seven-straight in-the-money finishes to begin his career ended with a fifth in the Tropical Park Derby on Dec. 26 at Gulfstream. In his most recent start, he was sixth in the Tampa Bay Stakes (G3). 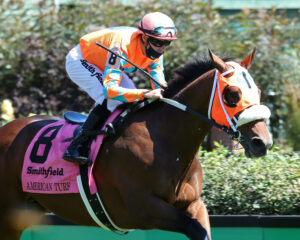 “He’s a nice horse and he has certainly has shown his quality and class on a number of occasions,” said Dr. Harvey Diamond, the founder and president of Skychai, which he operates with Jim Shircliff.

Fancy Liquor, who races for Skychai and David Koenig’s Sand Dollar Stable, won his career debut at 14-1 on Feb. 2, 2020 at Gulfstream Park. He then ran third, beaten 2 ¼ lengths, in the Jeff Ruby Steaks (G3) on March 14 on the synthetic track at Turfway Park.

Diamond said jockey Florent Geroux’s positive comment about the colt’s ability after the Jeff Ruby convinced him that Fancy Liquor belonged in stakes company. However, Diamond said it wasn’t what they expected from the second foal out of Brandys Secret.

“We bred him and I was surprised that we got the quality out of him that we did,” Diamond said. “Loved his dam. She was just a great race mare for us and has turned out to be a very nice broodmare.”

Brandys Secret, a Florida-bred by Secret Romeo, spent most of her long career in claiming races and starter allowances and handicaps.

“The dam was really nothing. She was basically a ham and egger,” Diamond said. “She sure loved to win. She didn’t like to lose. She pretty much has bred that into a few of the horses that we have gotten out of her.”

Brandys Secret won her first start at the now-closed Pinnacle Race Course in Michigan in 2010 and her career finale in Jan. 2014 at Gulfstream Park. She finished with 21 wins in 44 starts, 11 of them in 18 races for Skychai, which acquired her in 2012. A winner of dirt and synthetics, she was especially effective on turf, compiling a record of 8-1-2 in 11 races.

Jockey Kendrick Carmouche, who was up for both of Winters Back’s wins at Aqueduct, will be down from New York to ride the 4-year-old in the Canadian Turf. Winters Back, trained by Todd Pletcher for Waterford Stable, was second by a head in a one-mile optional claimer on Jan. 23.

“He’s training well and we’re looking forward to trying him in a stake race for the first time,” Pletcher said.

While he has plenty of high-level experience, 7-year-old Monarchs Glen will be making his first graded stakes start since finishing seventh in the 2019 United Nations (G1) for owner-breeder Juddmonte Farms and trainer Bill Mott. From the first crop sired by Juddmonte’s unbeaten star Frankel, Monarch’s Glen won the Darley Club Stakes (G3) as a 3-year-old. He proved to be a difficult horse to handle and was gelded that year. As a 4-year-old he captured the Wolferton Stakes at the 2018 Royal Ascot meeting.

This will be the first start for new owner Stefania Farms and trainer Saffie Joseph Jr. Stefania claimed the 7-year-old for $75,000 on Jan. 13 at Gulfstream Park. In his previous start Monarchs Glen prevailed in a long stretch drive to beat the Joseph-trained Renaissance Frolic by a length, a performance that drew the trainer’s attention. He said that the horse was claimed with the intention of running him in the Barbados Gold Gup. That race has been postponed, Joseph said, and Monarchs Glen will run in the Canadian Turf.

Joseph said that Monarchs Glen can be a strong-headed horse in a race and wants to be on the outside, which always costs him ground.

“If you look at his races, he’s always running longer than the others,” Joseph said. “I think he is one good trip away from running a big race. “