HOT SPRINGS, AR (Saturday, March 6, 2021) – Willis Horton Racing LLC’s Will’s Secret secured a place in the starting gate for the $1.25 million Kentucky Oaks (G1) with her third straight victory in Saturday’s $300,000 Honeybee Stakes (G3). The triumph was worth 50 points towards eligibility in the Oaks and put her at the top of the leaderboard with 60 total points following her other stakes win in the Martha Washington Stakes Jan. 30. 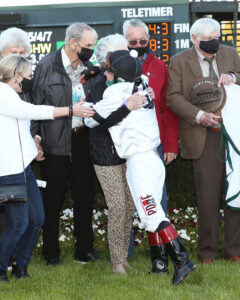 dating to when he won Churchill Downs’ 1999 Golden Rod on Humble Clerk. Will’s Secret won her third straight race, including taking Oaklawn’s listed Martha Washington in her last start, all under Court.

Will’s Secret and Tabor Hall were within a half-length of each from the start, with the later having the lead through an opening quarter mile in :24 1/5 before the eventual winner took over after a  half mile in :49 3/5. Will’s Secret continued to widen her lead through the stretch and finished three-quarters of a length in front of the fast closing Pauline’s Pearl. The winning time was 1:44 3/5 over a fast track.

“She broke really well today and we weren’t pressured early on,” Court said. “She was comfortable on the front end and able to dictate a moderate, easy pace. Therefore, I was able to have plenty of horse to finish with and when I called on her, she was full of run down the stretch. It just worked out very favorably today. I want to thank the Hortons and trainer Dallas Stewart.”

Said Stewart: “It was a great ride. She loves that track. She showed a little more versatility, that she can be on the lead and finish it off and that’s really good to have in a racehorse. I just told (jockey Jon Court) to stay out of her mouth, let her break away from there and get around that first turn. I think that’s important at Oaklawn. You’ve got to get around that first turn and be in good shape. Looks like we’ve got that down. She just coasted home from there.” 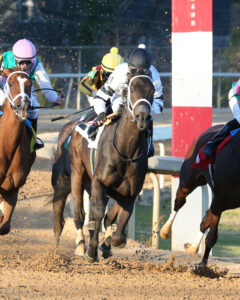 “I was actually tucked in right behind the winner the whole way. She got out at the three-eighths pole,” said Joe Talamo, rider on Sun Path. “I really thought I was a winner turning for home. Hat’s off to the winner. She ran a really, really hard race.”