It turns out that Bango loves Ellis Park, too. 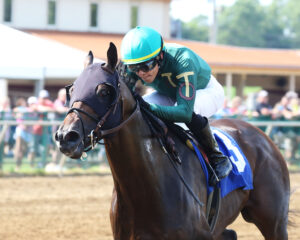 Fred and Debbie Schwartz’ 4-year-old colt came into Saturday’s $75,000 Good Lord Stakes with six of his seven career victories coming at Churchill Downs, trainer Greg Foley’s hometown track. But Bango, who was kicking up his heels in the paddock before the races, kicked away in the stretch to power to a five-length victory over Sir Alfred James at the RUNHAPPY Meet at Ellis Park.

“He ran great,” Foley said. “That was one of the reasons I wanted to run him back. Not to say he couldn’t win anywhere else, but he never had, other than the race at Turfway. He was doing so well. We were here, and he was coming out of his skin. It was like three weeks between races, that you thought was maybe a tad quick. My owner asked me a couple of times (about that). I said, ‘Fred, we have to run him, work him or he’s going to kill somebody.’ I said, ‘Let’s go ahead and run him.’

“So congrats to Fred and Deb Schwartz. They’ve got a really nice horse. We’re just going to play around with him, and see how things work out.”

Bango went off the favorite at slightly more than even money under Marcelino Pedroza, and ran accordingly. In fact, the margin was the largest of his career as the colt won his third straight stakes following scores in Churchill Downs’ Kelly’s Landing and Aristides. Bango earned his first stakes victory in Turfway Park’s 2020 Animal Kingdom for 3-year-olds.

Pedroza said he was glad that Bango broke from just inside Sir Alfred James, who set a resolute pace. 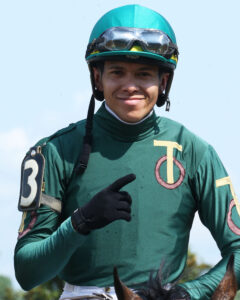 “He was the horse to beat,” Pedroza said. “Good thing we were next to him, so we could see out of the gate if he broke better than me. And he did, so I just put him in the chasing position. I was just loaded turning for home. He was already asking to go. I was just on cruise control. I mean, it was an easy win, really.

“Just turning for home, he started to put his ears up. I said, ‘Well I don’t want to relax too much.’ So I just tapped him on the shoulder, and he took off. He was more impressive than normal. Like Greg said, he loves Churchill, and it was good to see him win at another track like he did today.”

Bango, a son of WinStar Farm’s A.P. Indy stallion Congrats bred by the Schwartz’ Tamaroak Stable, covered 6 1/2 furlongs in 1:14.63, less than a second off the track record 1:13.74 set by Bagg O’Day in 2015. It was another length back to Guest Suite, followed by Lamartine and Dark Oak. Mocito Rojo and I’m Corfu were scratched.

Bango was a firecracker in the paddock, sending those standing in the grassy center of the walking ring scurrying to give his heels space. 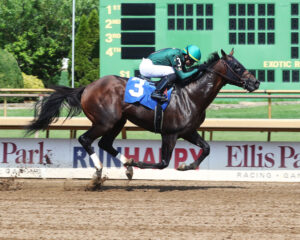 “He’s been that way all week,” Foley said. “And just feeling good, not mean. He’s not a mean horse. He was just wanting to do something. If you’d look at his color, he’s got dapples as big as apples. His color just glows. He’s on top of his game right now.”

Foley plans to target a new sprint stakes that is expected to be held at Churchill Downs’ September meet.

“After that, we’ll see,” he said. “The Phoenix at Keeneland comes up a little quick after that. If he runs big there, who knows? I think he’s one of the best sprinters going right now. We might have to look at the Breeders’ Cup.”