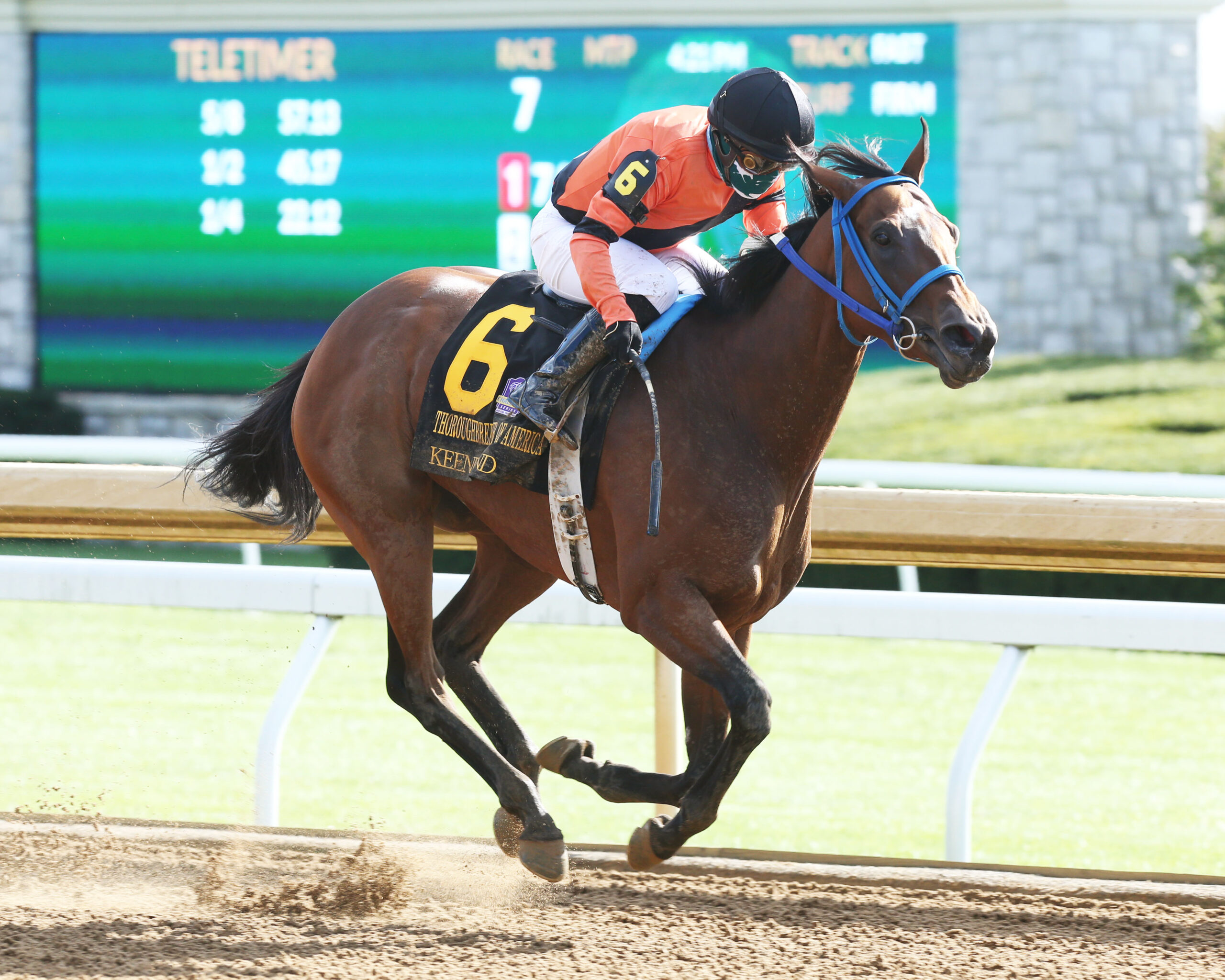 Inthemidstofbiz will face five other fillies and mares as she goes for a repeat victory in the 41st running of the $250,000 Thoroughbred Club of America (G2) Saturday afternoon.

Run at 6 furlongs on the main track, the Thoroughbred Club of America is a Breeders’ Cup Challenge race with the winner earning a fees-paid berth to the $1 million Breeders’ Cup Filly and Mare Sprint (G1) to be held Nov. 6 at Del Mar.

The Thoroughbred Club of America is scheduled as the seventh race on Saturday’s 11-race program with a 4:12 p.m. ET post time. First post Saturday is 1 p.m.

Inthemidstofbiz, who has won one of two starts in 2021, comes into Saturday’s race off a fourth-place finish in the Satin and Lace (L) at Presque Isle Downs, the same race she used as a prep for her TCA victory last year. Emmanuel Esquivel has the mount and will exit post position three.

Only Excitable Lady in 1982 and 1983 has posted victories in the TCA in consecutive years. 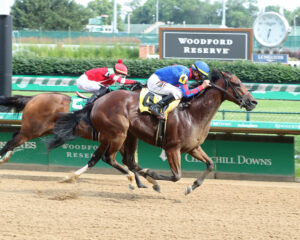 Favoritism figures to be divided among multiple graded stakes winners Bell’s the One, Frank’s Rockette and Estilo Talentoso. Estilo Talentoso was runner-up in the Madison (G1) here in the spring.

Lothenbach Stables’ Bell’s the One has won two of five starts in 2021 highlighted by a triumph in the Honorable Miss (G2) at Saratoga in July. Trained by Neil Pessin, Bell’s the One finished second in the Open Mind at Churchill Downs in her most recent start.

Trained by Bill Mott, Frank’s Rockette enters Saturday’s race off a third-place finish in the Seeking the Pearl Stakes at Colonial Downs on Aug. 23. Junior Alvarado has the mount from post position one.

Estilo Talentoso, owned by the partnership of Medallion Racing, Barry Fowler, Parkland Thoroughbreds, Little Red Feather Racing and BlackRidge Stables and trained by Juan Arriagada, also has been off the board only once in her 16-race career. That came in her most recent start against champion Gamine in the Ballerina (G1).

Jose Ortiz, who was aboard for the first time in the Ballerina, has the mount Saturday and will leave post position four.

The field for the Thoroughbred Club of America, with riders and weights from the inside, is: Frank’s Rockette (Alvarado, 120 pounds), Club Car (Tyler Gaffalione, 120), Inthemidstofbiz (Esquivel, 120), Estlio Talentoso (Ortiz, 122), Miss Mosaic (Colby Hernandez, 120), Bell’s the One (Lanerie, 123).

The youngster, 3-year-old Golden Pal, and the veteran, 8-year-old Extravagant Kid, top a field of seven entered Wednesday for Saturday’s 25th running of the $200,000 Woodford (G2) Presented by TVG going 5½ furlongs over the Keeneland turf course. 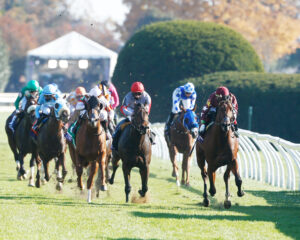 The Woodford Presented by TVG is the first of five graded stakes on Saturday’s 11-race program and will go as the sixth race with a 3:40 p.m. post time. First post Saturday is 1 p.m.

Ranlo Investments’ Golden Pal will be making his first Keeneland start since winning the Breeders’ Cup Juvenile Turf Sprint (G2) here to kick off the World Championships program. Trained by Wesley Ward, Golden Pal finished seventh in the Coolmore Wootton Bassett Nunthorpe (G1) at York in England in August in his most recent start.

Golden Pal will exit post two and be ridden by John Velazquez.

DARRS Inc.’s Extravagant Kid, earner of more than $1.6 million and winner of the Al Quoz Sprint Sponsored by Azizi Developments (G1) in Dubai in March, will be making his first Keeneland start since finishing fourth in the Breeders’ Cup Turf Sprint (G1) last November. Prior to that, he finished second in the Woodford Presented by TVG.

Apparently the ability to handle both dirt and grass runs in the family for the 6-year-old gelding Diamond Oops and his 2-year-old “niece” Diamond Wow.

The Patrick Biancone trainees arrived at Keeneland Tuesday, and Wednesday morning both horses visited the Paddock before conducting their morning exercise on the all-weather training track with Biancone’s daughter and assistant, Andie, handling the riding duties. 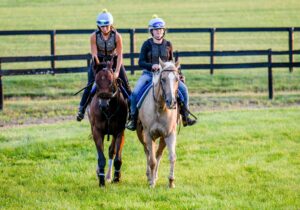 Diamond Oops is entered to run in Saturday’s Keeneland Turf Mile (G1), while Diamond Wow will be redirected to next Wednesday’s JPMorgan Chase Jessamine (G2) on the turf instead of running in Friday’s Darley Alcibiades (G1) on the dirt.

“The 11 post is a little tough,” Andie Biancone said of opting out of Friday’s race with the undefeated Diamond Wow, who is owned by Diamond 100 Racing Club, Amy Dunne and Patrick Biancone. “This will give her more time to settle in. She has won on both surfaces.”

“He ran well at Kentucky Downs (in the FanDuel Turf Sprint-G3) and that prepared him for this,” Biancone said. “He is 6 now and the turf is a kinder surface for him. We know he enjoys the turf here after running second in the Turf Mile two years plus the Turf is $750,000 versus $250,000 (for the Stoll Keenon Ogden Phoenix).”

Both runners are offspring of Lookin At Lucky. Diamond Wow’s dam, Patriotic Diamond, is a half-sister to Diamond Oops.

“Patriotic Diamond is the first horse I ever galloped,” Biancone said. “Her daughter is extremely professional, precocious and well-behaved. She does everything right. Everything is easy for her.”

Trained by Aidan O’Brien, Order of Australia and stablemates Empress Josephine (IRE) and Nicest (IRE) went to the main track at 8 a.m., backtracked to the seven-eighths pole and made one circuit of the track.

“That was what we call a steady canter,” said Kieran Murphy, who is overseeing the trio’s preparations here. “They last went to the track Sunday morning back home.”

Empress Josephine is entered to run in Saturday’s $400,000 First Lady (G1) Presented by UK HealthCare while Nicest is targeting a possible start in the $500,000 Queen Elizabeth II Challenge Cup (G1) Presented by Dixiana on Oct. 16. …

The new Keeneland Turf Pick 3 wager will be offered on the final three turf races each race day. The minimum wager is $3 and will follow the same rules as the traditional Pick 3. The new wager has a 15 percent takeout, the same low takeout as Keeneland’s popular Pick 5 wager.

Keeneland Select Handicapping Challenge. Sport of Kings, the free horse racing contest website, has this new free online handicapping contest for casual fans and serious horseplayers. The contest requires participants to make mythical selections on two Keeneland races for each day of the meet. Two seats to the 2022 NTRA National Horseplayers Championship will be awarded. To sign up, click here.

Every Friday and Saturday of Fall Meet

The Hill. At this popular tailgating area, fans can watch and wager while enjoying the racing action from the Jumbotron and wagering tent, while food trucks and live music presented by The Burl create a festive atmosphere. No ticket or reservation is required for The Hill.

The Keeneland Shop Presents “Meet the Maker” at Milliners Corner with Christine A. Moore Millinery.

Every Saturday of Fall Meet

Sunrise Trackside. This free Saturday morning program is geared toward families and offers a unique view of Thoroughbreds during training hours. Children’s activities from 8-10 a.m. include a meet and greet with Keeneland mascot Buckles, along with face painting, games and more. Fans can purchase coffee and donuts while watching horses train. The Keeneland Track Kitchen at the east end of the stable area (with no track view) is open for breakfast that includes “grab and go” and seating options. A 30-minute Paddock demonstration by the Secretariat Center, a premier reschooling facility that showcases adoptable Thoroughbreds and is located at the Kentucky Horse Park, begins at 10 a.m. Mini tours of Keeneland will be available at the Welcome Stand in the Paddock.