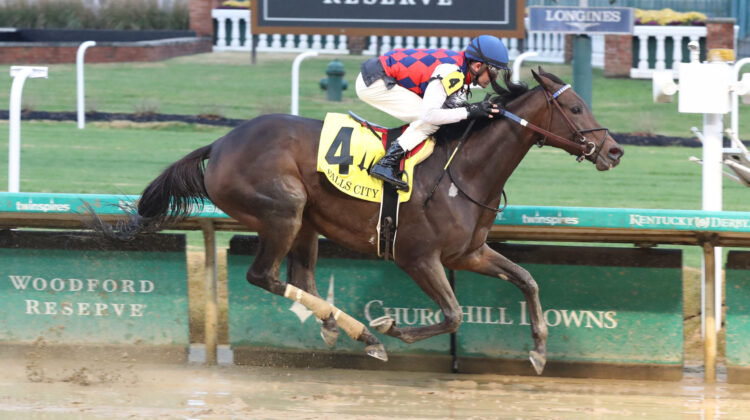 LOUISVILLE, Ky. (Thursday, Nov. 25, 2021) – It was déjà vu all over again for Three Chimneys Farm and Walking L Thoroughbreds’ Envoutante as the 4-year-old filly upset favored Bonny South by six lengths in Thursday’s $500,000 Falls City (Grade II), the traditional Thanksgiving Day fixture for fillies and mares at Churchill Downs, for the second year in a row.

Trained by Kenny McPeek and ridden by Brian Hernandez Jr., Envoutante ran 1 1/8 miles over a sloppy track in 1:51.52 – the slowest since Dundalk Dust’s 1:53.37 under similar conditions in 2011 – to become the first back-to-back Falls City winner since Screen Prospect in 1990-91.

Last year, Envoutante also beat 4-5 favorite Bonny South by six lengths in the Falls City but it was over a fast track in 1:49.11, which was the fastest Falls City since Silent Eskimo’s stakes record of 1:48.85 in 1999.

Breaking from post three in the field of six fillies and mares, Envoutante saved ground and raced along the rail throughout the two-turn race. Black-Eyed Susan (GII) and Iowa Oaks (GIII) winner Army Wife had a narrow advantage over Envoutante through the first half-mile of the race (:24.82 and :49.20) but the defending race champion took over with a five furlongs to run.

Around the final turn and six furlongs in 1:13.55, Army Wife continued to chase leader Envoutante as Audrey’s Time and multiple graded stakes winner Bonny South loomed boldly with wide rallies. Audrey’s Time drew even with Envoutante at the top of the stretch and Bonny’s South came within a length, but Envoutante had plenty of energy left and quickly opened up in the stretch for the comfortable win in the 106th running of the Falls City.

“Even though we were battling on the front end, down the backside she was still traveling very comfortably,” Hernandez Jr. said. “I knew going into the far turn and at the quarter pole my filly would have enough kick left in her for the stretch. She ran a great effort and repeated her race from last year’s Falls City.”

Army Wife, High Regard and Crystal Ball completed the order of finish. Cheetara (CHI) was scratched.

“She took a lot of mud with the way she runs and what the pace scenario was,” jockey Florent Geroux said of Bonny South. “She ran a good race but it was tough to win with the pace.”

Prior to Thursday’s triumph, Envoutante finished fifth in the $500,000 Spinster (GI) at Keeneland. In May, she won the $150,000 Shawnee at Churchill Downs. Overall, she’s won four of seven starts at the Louisville oval.

“She definitely likes Churchill,” McPeek said. “Brian did a fantastic job with her on the front end. When I looked up at the half-mile and saw (:49.20), I knew we were in a good spot. I’m sure her owners are celebrating at home with their families for Thanksgiving, so a special congratulations goes to them. We’ll have to see what happens next for her. She had a date with Gun Runner if things didn’t go well today but showed today she’s still got it in her.”

Envoutante is a dark bay or brown daughter of Uncle Mo out of the Bluegrass Cat mare Enchante. She was bred in Kentucky by Jumping Jack Racing LLC.

Racing at Churchill Downs continues Friday with the popular day-after Thanksgiving card highlighted by the 147th running of the $750,000 Clark presented by Norton Healthcare (GI) for older horses. The Clark goes as Race 11 of 12 at approximately 5:56 p.m. (all times Eastern). The first race is 1 p.m. There is a $195,484 jackpot carryover in the 20-cent Derby City 6, which covers Races 7-12.

Hall of Fame trainer Steve Asmussen found another way into the record books.

Asmussen, the 56-year-old who collected win No. 9,446th on Aug. 7 at Saratoga to become North America’s all-time win-leader among trainers, saddled what is believed to be a record five winners on a single card at Churchill Downs on Thanksgiving Day.

Asmussen, who is atop the Fall Meet trainer standings with 18 wins, is Churchill Downs’ all-time win-leader with 819 victories and he is poised to collect his record-extending 25th Churchill Downs training title when the 21-day meet concludes Sunday.