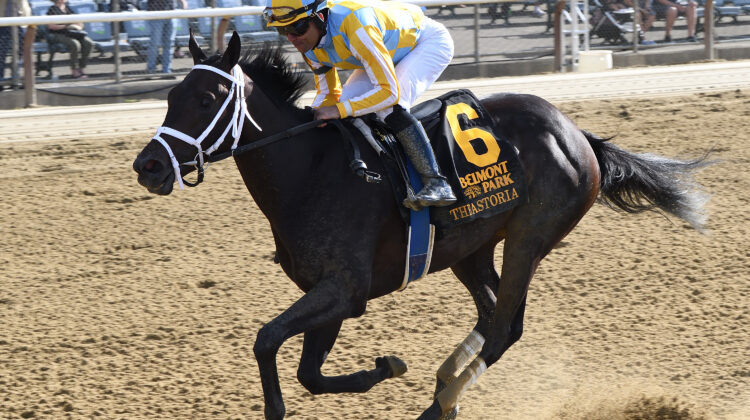 Campaigned by John Oxley, Devious Dame arrived at the Astoria from a debut victory on May 5 sprinting five furlongs over Churchill Down’s main track under Joe Talamo where she dueled for the lead before taking command and opened up to a 5 1/2 length advantage.

Joel Rosario picked up the mount in the Astoria and settled the filly in fourth from the outermost post 5 as Trevor McCarthy asked Alexis’s Storm from the inside post to lead the field through an opening quarter-mile in 22.67 seconds over the fast main track. The running order remained unchanged down the backstretch with Alexis’s Storm continuing to roll under McCarthy.

Rosario remained patient aboard Devious Dame as Alexis’s Storm held her advantage by a half-length at the top of the stretch and came under a ride from McCarthy. Devious Dame, once asked, was full of run down the center of the racetrack and collared Alexis’s Dream just past the eighth pole under a hand ride from Rosario, who did not have to do much more than shake the reins to get his filly into gear. Devious Dame was wrapped up at the wire a 5 1/4-length winner in a final time of 1:04.75.

The late-running Girl Bye stayed on for third with Magic Beauty and Shaymyname, who was unsettled before the race, rounding out the order of finish. Born Dapper was scratched.

Casse said he was pleased to see Devious Dame rate from further off the pace than her debut effort.

“We came up here with the intention of winning but got to thinking that we’d rather let her settle a bit more than being adamant about just rushing her off her feet,” said Casse. “I do think she’s a two-turn filly and we need to teach her some of that patience now. Thankfully, it paid off.

“She’s got a very potent combination,” Casse continued. “She’s fast enough to sprint, but I really do think once we get her into two-turn races and be forwardly-placed, but in her own rhythm, she’s going to be much more effective.”

“He told me to just let her come out of there and let her find her stride. She felt relaxed,” said Rosario. “At some point I had to ask her a little bit to pick it up, and she did. It looked like the further we went, she got better. It all worked out well.”

Casse noted the maturity Devious Dame gained through a start on the Thursday card of Kentucky Derby week at Churchill Downs.

“She won on Thurby and there were 50,000 people there and she never turned a hair,” said Casse. “She has all the tools to be a good horse.”

Casse said Devious Dame may point to the Grade 3, $200,000 Adirondack on August 7 at Saratoga Race Course with her sights set on Grade 1 company later in the year at Keeneland.

“I’d like to run her in the Adirondack and then freshen her up for the Alcibiades,” said Casse. “Those are the two races I really want to point to. If we’re fortunate enough that she is a Breeders’ Cup type filly, I’d like to get a two-turn race into her before the Breeders’ Cup.”

Thursday kicked off the Belmont Stakes Racing Festival, which continues through Saturday and is highlighted by the Grade 1, $1.5 million Belmont Stakes presented by NYRA Bets, one of eight Grade 1 races on Saturday’s lucrative card.