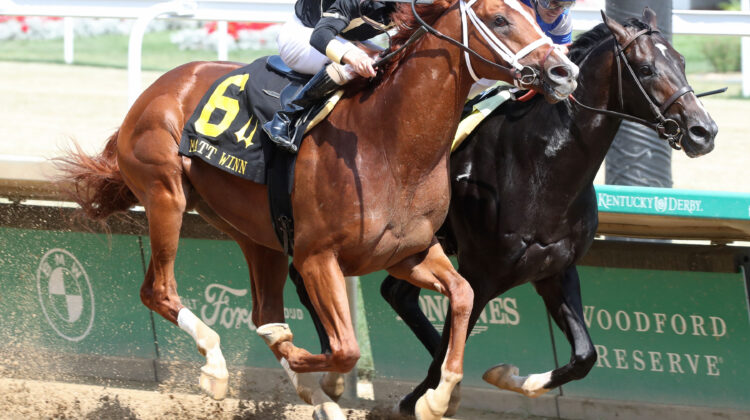 LOUISVILLE, Ky. (Sunday, June 12, 2022) – Arkansas Derby (Grade I) winner Cyberknife bounced back from his 18th place finish in the Kentucky Derby presented by Woodford Reserve (GI) and put his nose in front of pacesetter Howling Time at the wire to narrowly win Sunday’s 25th running of the $225,000 Matt Winn Stakes (Grade III) for 3-year-olds at Churchill Downs.

Cyberknife, breaking from post No. 6 of seven, hesitated slightly at the start as last year’s Street Sense Stakes winner Howling Time broke alertly from the three-stall to lead the field of seven through fractions of :24.19, :47.81, 1:11.51 and 1:35.60. Cyberknife was never more than a length off Howling Time’s right hip. Leaving the final turn, the two drew even and brushed each other slightly before engaging in a thrill stretch battle. A photo finish was needed to determine the winner as the two appeared to hit the wire together.

“He broke a little slow but I was able to get him into a good position,” Geroux said. “He was traveling well and (Howling Time) was really game on my inside. We were battling the whole stretch. I couldn’t tell which one of us won but I’m glad it was Cyberknife.”

Added Howling Time’s jockey Joe Talamo, “You can’t get a more brutal beat than that.”

Droppin G’s was another eight lengths back in fourth, and was followed by Camp David, Trafalgar and Tough to Tame.

Cyberknife, out of the six-time stakes-winning Flower Alley mare Awesome Flower, was bred in Kentucky by Ken and the late Sarah Ramsey. The colt is named after Accuray Inc.’s robotic radiation therapy that was successfully used to treat 66-year-old Gold’s prostate cancer.

“He’s still a developing 3-year-old and he gets that experience by running in the afternoon,” Cox said. “I think he’s making good progress and ran hard today. We got on the right side of a tight photo. (Howling Time) ran a really game race. (Cyberknife) is a horse that I think we are looking to take the next step. He’s a sound, happy horse and he’s growing up. We’re excited about him as a prospect throughout the rest of the year.”

The Matt Winn is named in honor of the famed Churchill Downs president that served as the driving force in the development of the Downs and his beloved Kentucky Derby.

Following dark days on Monday and Tuesday, racing at Churchill Downs is scheduled to resume Wednesday with an eight-race card that begins at 12:45 p.m. ET.

Pretty Birdie, the 1-2 favorite, broke fastest from the gate in the field of five 3-year-old fillies and dictated the terms through a moderate first quarter mile in :23.07 and a half-mile in :45.41 as Wicked Halo raced just off Pretty Birdie’s right hip. Off the turn and into the stretch, Wicked Halo drew even with Pretty Birdie inside the final furlong and inched clear late for the triumph.

“We were able to sit a nice trip right off of Pretty Birdie,” Gaffalione said. “My filly was very composed early on into the race and when I asked her to get closer around the turn she stayed right with (Pretty Birdie) and was able to kick clear in the stretch.”

Running Happy was fourth and Baby Blue Eyes was fifth.

Wicked Halo is a daughter of Gun Runner out of the Tapit mare Just Wicked and was bred in Kentucky by her owner Ron Winchell.

The Leslie’s Lady honors Fred and Nancy Mitchell’s breed-shaping broodmare who produced 15 foals, of which nine became racehorses and seven were winners, including top sire Into Mischief, four-time champion Beholder and Grade I winner and sire Mendelssohn. The 2016 Broodmare of the Year passed away peacefully at age 26 on Jan. 24. 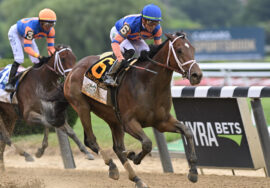