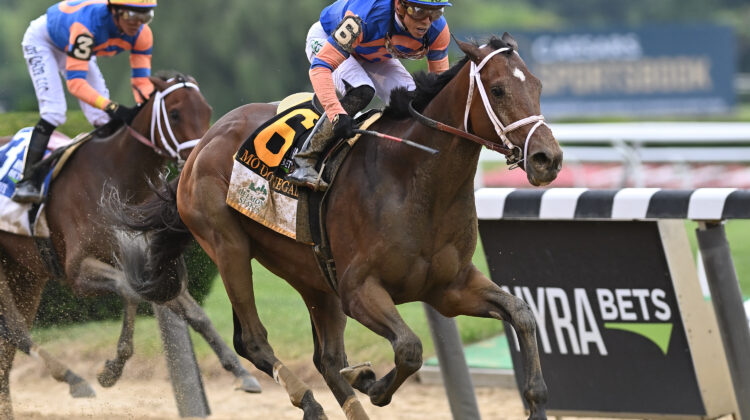 For Repole, who co-owns Grade 1-winning Nest with Eclipse Thoroughbred Partners and Michael House, the victory provided redemption for the Queens, New York native’s Stay Thirsty, who finished a close second to Ruler On Ice in the 2011 Belmont Stakes.

“It’s a 40-year dream. Coming to this track and Aqueduct, being a kid from New York, this is New York’s race. In 2011, I came in second with Stay Thirsty and I watched the replay 150 times. I will no longer watch that replay,” Repole said. “Getting a first and second here, it makes up for it. This was the biggest goal of my racing life, and I just accomplished it and I ran 1-2.”

Mo Donegal is by the Repole/Pletcher-campaigned Uncle Mo, who captured the 2010 Breeders’ Cup Juvenile en route to Champion 2-Year-Old Colt honors. Out of the Pulpit mare Callingmissbrown, Mo Donegal was purchased by Donegal Racing for $250,000 at the Keeneland September Yearling Sale.

“I want to thank all the partners of Donegal Racing. They’ve believed and today they’ve been rewarded,” said Jerry Crawford, owner of Donegal Racing. “I think this victory today shows that the sport is more accessible than they may realize. I can’t say enough for Todd Pletcher and Irad Ortiz, Jr. for the great job they’ve done with this horse. We were a little confident going into this race today and when he turned for home, I said ‘forget about it.’ I knew Todd thought he could get a strong last quarter mile, and he surely did.”

We the People took command under Flavien Prat and led the field of eight sophomores through splits of 23.99 seconds, 48.49 and 1:13.23 on the fast main track, with the Manny Franco-piloted longshot Skippylongstocking pressing from second position, while the upset Grade 1 Kentucky Derby-winner Rich Strike trailed last-of-eight under Sonny Leon.

Nest, who stumbled at the start, advanced up the rail down the backstretch to stalk from third position to the inside of Mo Donegal as Skippylongstocking continued to pester the pacesetter. Ortiz, Jr. gave Mo Donegal his cue approaching the quarter-pole and his charge advanced with a powerful move, surging outside rivals at the top of the lane and got the jump on Nest, who then angled outside and followed her stablemate’s path.

Mo Donegal vaulted past a game Skippylongstocking and a tiring We the People with three-sixteenths remaining, traveling confidently to the wire down the middle of the track to win by three lengths in a final time of 2:28.28. Nest completed the exacta by 3 1/4-lengths over Skippylongstocking with We the People, Creative Minister, Rich Strike, Barber Road and Golden Glider rounding out the order of finish.

Mo Donegal entered from a troubled fifth in the Grade 1 Kentucky Derby after breaking poorly from the inside post and rallying 10-wide down the lane to finish 5 ¾ lengths in arrears of 80-1 upset winner Rich Strike.

Ortiz, Jr. said a clear trip made the difference on this day as he bested Nest, ridden by his brother Jose Ortiz.

“Last time in the Derby, he didn’t have the best trip and he still got beat by [only] three or five lengths,” Ortiz, Jr. said. “I knew if I got a better trip, he could get there. When I asked him in the clear, he took off. He’s a nice horse.”

The victory was the second in the Belmont for Ortiz, Jr. following a score with Creator in 2016.

“It means a lot to me. It’s a lot of hard work and dedication. I’ve been riding here for 11 years – there’s no better feeling,” Ortiz, Jr. said. “I’m happy I won and I’m happy Jose got second.”

Ortiz said he was proud of how Nest, winner of the Grade 1 Ashland in April at Keeneland, recovered after the break.

“She stumbled out of the gate. I think that was the worst break for me today. When she got up, she got a nice position on the rail,” Ortiz said. “By the three-eighths pole, she was traveling very nicely. I was expecting We the People to run a little bit further and not get tired until the three-sixteenths and we could split horses then, but We the People was done by the three-eighths.

“When I took a peek to go out, Mo Donegal was already there full of horse. I didn’t want to make a premature move and when I called her to run, I wanted it to be my only move,” he continued. “I had to wait to make my move. I don’t know if it would have made a difference. I know Mo Donegal was traveling very nicely at the quarter pole and traveled very nicely to the wire, so I would call myself second-best. It was a huge effort by my filly.”

Rodolphe Brisset, trainer of morning-line favorite We the People, said his Grade 3 Peter Pan-winner may have found the distance trying.

“We had everything the way we wanted. I just think the mile and a half was just too long, you know,” Brisset said. “That would be our first guess to why he ran like that. There’s nothing you can do – you have to try and he went in 48 and two-fifths and 1:13 and it was just too long for him.”

Eric Reed, trainer of Rich Strike, lamented being so far back early in the race.

“We were hoping we could have been a little closer and our pace was slow,” Reed said. “Our biggest change was deciding to stay a little off the rail and try to give him a good, open run where he could take off. The whole way, his head turned and he was trying to get to the inside. I guess we made a mistake not putting him on the fence.”

Mo Donegal graduated at second asking in October at Belmont and made the grade at first asking, besting eventual Grade 1 Blue Grass-winner Zandon by a nose in the Grade 2 Remsen in December at Aqueduct Racetrack.

He made his seasonal debut with a third-place finish in the Grade 3 Holy Bull in February at Gulfstream before defeating next-out Grade 1 Preakness-winner Early Voting in the Grade 2 Wood Memorial presented by Resorts World Casino in April at the Big A.

Mo Donegal became the first horse to secure the Wood Memorial/Belmont double since Empire Maker in 2003.