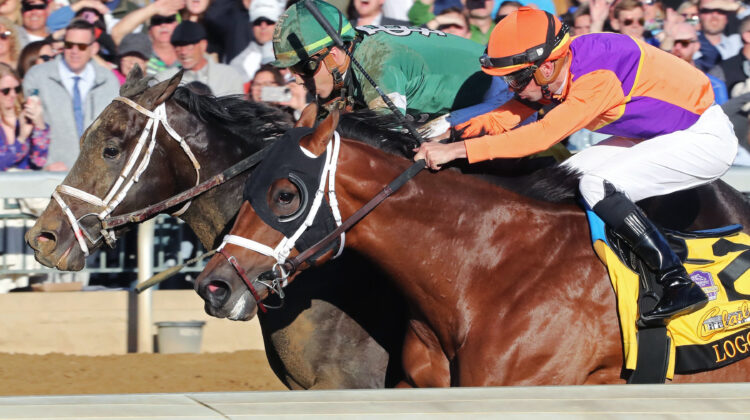 Trainer Todd Pletcher, whose barn features the likes of prime Breeders’ Cup contenders in Life Is Good for the Classic (G1) and Malathaat and Nest for the Distaff (G1), added two more runners to the arsenal Saturday with Grade 1 victories at Keeneland by Forte in the Claiborne Breeders’ Futurity and Annapolis in the Coolmore Turf Mile.

“They are both good this morning; bright and happy,” said Amelia Green, who is overseeing the Pletcher string at Keeneland.

A half-hour later, Bass Racing’s Annapolis notched his first Grade 1 victory with a 1½-length victory over Ivar (BRZ) and in the process earned a berth in the $2 million FanDuel Breeders’ Cup Mile (G1) presented by PDJF to be run Nov. 5 here.

Pletcher, who will be here this afternoon to watch Malathaat run in the Juddmonte Spinster (G1), had two other Breeders’ Cup hopefuls join the Keeneland string in recent days from New York. They are Frizette (G1) winner Chocolate Gelato for the $2 million NetJets Breeders’ Cup Juvenile Fillies (G1) on Nov. 4 and Pilgrim (G2) winner Major Dude for the $1 million Breeders’ Cup Juvenile Turf (G1), also on Nov. 4.

Champion Echo Zulu worked a half-mile on her own in :49.40 in preparation for the Filly and Mare Sprint (G1).

After the race, Brown said both runners would remain at Keeneland with In Italian headed for the $2 million Maker’s Mark Breeders’ Cup Filly and Mare Turf (G1) going 1 3/16 miles and Regal Glory pointed to the $2 million FanDuel Breeders’ Cup Mile (G1) Presented by PDJF against males.

SLAMMED MAKES THE GRADE IN THOROUGHBRED CLUB OF AMERICA ROMP

“When she broke well, I wasn’t worried,” Fincher said before boarding a flight back to New Mexico. “She was sitting on a big race, and she is super talented. I was not surprised (with how easy she won).”

The margin of victory matched the second-largest figure in the race established by Groupie Doll in 2012. Groupie Doll came back weeks later to win the first of her two Breeders’ Cup Filly and Mare Sprints (G1).

Slammed earned a fees-paid berth into this year’s renewal of the Breeders’ Cup Filly and Mare Sprint but will have to be supplemented to compete.

Fincher already is set to make his Breeders’ Cup debut with Senor Buscador, who earned a berth in the Big Ass Fans Dirt Mile (G1) by virtue of his victory in last weekend’s Ack Ack (G3) at Churchill Downs. Senor Buscador also is at Keeneland.

There is one dance left in the racing career of Golden Pal, whose warm-up performance in Saturday’s Woodford (G2) Presented by Fan Duel offered a glimpse of what could be a showstopper on Nov. 5 in the $1 million Breeders’ Cup Turf Sprint (G1).

In winning the Woodford Presented by FanDuel in stakes-record time of 1:01.39 for the 5½ furlongs on the turf, Golden Pal showed his usual speed out of the gate and then put the field away with a burst at the top of the stretch.

“He was going along well and then he hit the top of the stretch and went ‘Whoosh!’,” trainer Wesley Ward said Sunday morning.

“I have had a lot of horses and they all have their personalities, but he is like a Tom Brady or a Joe Montana,” Ward said. “He’s like that, someone that others look up to. He’s just an unbelievable athlete.”

Regarding other Coolmore Turf Mile (G1) horses, runner-up Ivar (BRZ) returned to The Thoroughbred Center, where trainer Paulo Lobo keeps his main string. Lobo said Ivar came back from Saturday’s race well and he plans to continue to the Breeders’ Cup.

Order of Australia (IRE), who finished a nose behind Ivar, was headed back home to Europe on Sunday. Trained by Aidan O’Brien, Order of Australia won the Breeders’ Cup Mile here in 2020 at 73-1 odds. Should he return for this year’s World Championships, he would have to be here by Oct. 30. …

Ain’t Life Grand, winner of the Iowa Derby (L), has arrived at Keeneland for an expected start in the 65th running of the $350,000 Hagyard Fayette (G2) on closing day, Oct. 29. Trained by Kelly Von Hemel, Ain’t Life Grand would make his first start against older horses in the Hagyard Fayette.

Champion Channel Make and fellow millionaires Arklow and Red Knight plus Grade 1 winner Highland Chief (IRE) headline a deep field of 12 plus four also-eligibles entered Sunday for Friday’s 28thrunning of the $300,000 Sycamore (G3) for 3-year-olds and up going 1½ miles on the turf.

Luis Saez, who was aboard for the victory in the Elkhorn, has the call Friday and will break from post six.

Donegal Racing and Joseph Bulger’s Arklow, a six-time graded stakes winner and earner of more than $3 million, will be looking to rebound from a sixth-place finish in the Kentucky Turf Cup (G2) at Kentucky Downs on Sept. 10. Trained by Brad Cox, Arklow will be ridden by Joel Rosario and break from post one.

Trinity Farm’s Red Knight, who achieved millionaire status with his victory over Arklow in the Kentucky Turf Cup, is trained by two-time Sycamore winner Mike Maker. Gerardo Corrales, who was aboard for the Kentucky Downs victory, has the call Friday and will break from post position two.