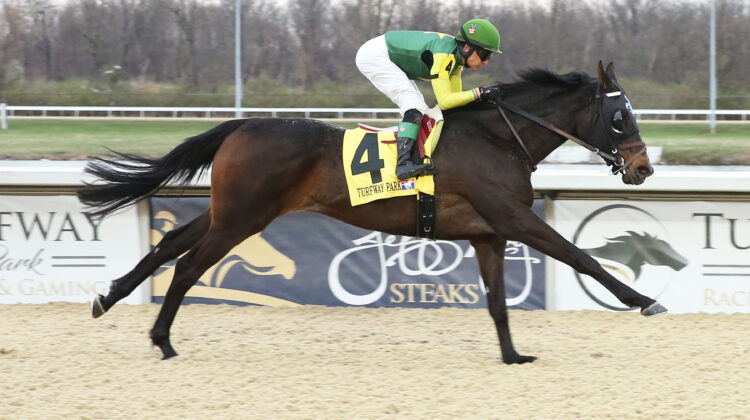 LOUISVILLE, Ky. (Tuesday, Nov. 8, 2022) — While claiming horses so often fill out the programs for the stakes horses, those making it to the Claiming Crown can be stakes horses themselves.

A prime example is the Keith Desormeaux-trained Bourbonette Oaks winner Candy Raid, who is running in the $150,000 Claiming Crown Tiara for fillies and mares at 1 1/16 miles on turf. Under the race’s starter conditions, the entrants must have raced for a claiming price of $25,000 or less in 2022 or 2021.

Candy Raid became eligible for Saturday’s race at Churchill Downs in her fifth start last year, when she finished fourth at Horseshoe Indianapolis in a $25,000 claiming race for horses that had not won two races. But then she began turning things around.

“She started getting good at the Fair Grounds,” Desormeaux said by phone from Louisiana. “One of the races that convinced me she was going forward was on the grass, so I know she can run on the turf. I just prefer not to. But, with such enviable conditions as are in this race, how can I not run? I know she can perform on the turf, and with those conditions, I just have to run.”

Off a Delta Downs allowance win, Candy Raid finished fourth in the Fair Grounds’ Silverbulletday Stakes. Though no factor in the subsequent Grade 2 Rachel Alexandra, she won Turfway Park’s $250,000 Bourbonette at 52-1 odds to earn a spot in the Kentucky Oaks. Candy Raid came in fifth that day, but only seven lengths behind victorious Secret Oath and five behind runner-up Nest, the favorite to be voted 3-year-old filly champion.

In two starts since, Candy Raid was well-beaten in Churchill’s Grade 3 Regret and the G3 Iowa Oaks.

“She was training phenomenally,” Desormeaux said. “After the Iowa Oaks, I wasn’t smart enough to figure it out but Stewart Elliott said, ‘Keith, you need to ’scope her; she’s stopping too quickly, and I thought I heard some noise.’ Maybe it wasn’t showing up before, but after that race, we ’scoped her and she was displacing (a breathing obstruction). So we did the surgery with the legend over there in Lexington, Dr. Rolf Embertson, and she’s trained great since then. So we’re very excited — and we haven’t rushed — about this and for next year, because she’s a very nice filly.”

Still, Desormeaux has some reservations about Saturday’s race. Candy Raid is a 3-year-old taking on older fillies and mares for the first time. Also, he said: “I don’t know if she’s at her best on the turf. I know she doesn’t dislike it, but I think she’s better on dirt.”

Corey Lanerie will have the mount, with James Graham committed to Conor Murphy-trained 4-year-old Sunny One, a third-level allowance winner at Keeneland in her last start. “That’s going to be the favorite,” Desormeaux predicted.

Candy Raid will be the first Claiming Crown horse for Desormeaux, who owns the daughter of Candy Ride in partnership with Don’t Tell My Wife Stables.

“Any program that can help the regular man, every-day horsemen that are filling those cards, and generating betting handle for the game, anything that can be thrown our way is appreciated,” said Desormeaux, who won the 2016 Preakness with Kentucky Derby runner-up Exaggerator.