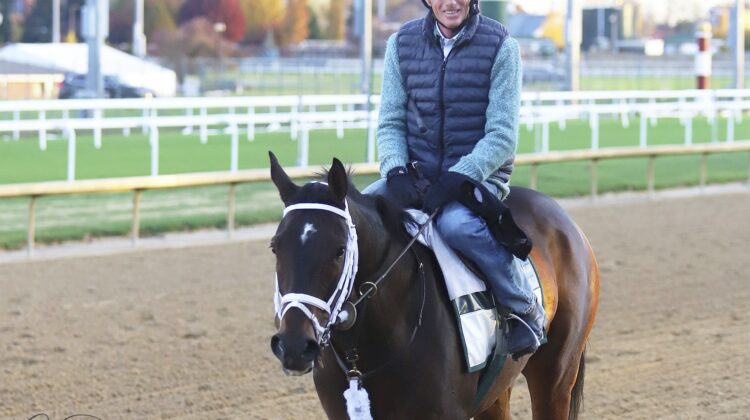 LOUISVILLE, Ky. (Tuesday, Nov. 8, 2022) — The Claiming Crown was created 24 years ago to serve as a Breeders’ Cup-style event celebrating the blue-collar horses that populate most of America’s racing programs. With the eight-race series coming to Churchill Downs for the first time Saturday, trainer Carl O’Callaghan is hoping the impressive showing by the Irish in last week’s Breeders’ Cup World Championships at Keeneland — where Aidan O’Brien won three races — carries over to 75 miles down the road.

O’Callaghan, who came to America from Ireland when he was 16 and now is based year-round at Penn National, will saddle his first Claiming Crown runner with Moti in the $100,000 Iron Horse Kent Stirling Memorial at 1 1/16 miles. The race is for horses that have run for a claiming price of $8,000 or less in 2021-2022. The 6-year-old gelding is owned by O’Callaghan and his wife, Melanie, and seven of his buddies back in the Emerald Isle. Using the money they’ve made with Moti, O’Callaghan’s lifelong pals from the tiny village of Newmarket-on-Fergus are coming to the United States, most for the first time.

“The race that Moti is going in, the Iron Horse, is really what these claimers are,” said O’Callaghan, who worked for trainers such as John Kimmel, Mike Pino and Todd Pletcher before opening his own stable in 2009. “We’re playing a rich man’s game with nickels and dimes, as one of my clients would say. It’s a fun day out. I’ve been very fortunate. There are seven of us into (ownership of) Moti, seven lads from back home, close friends of mine. They’re all flying into America for the first time and to see Churchill and the Twin Spires.

“I’ve been around the good horses. I used to gallop horses like Scat Daddy for Mr. Pletcher. But the claiming horses are the backbone of the operation. When you turn on the television every day, that’s what’s really running, the claiming horses. A horse like Moti is a hard-knocker. He’s had three wins, two seconds and two thirds for us. He’s coming off a win in 19 days. You wouldn’t be doing that with a horse like Life Is Good or one of them, you know what I mean? But these are the hard-knockers. He’ll work here this (Tuesday) morning. He shipped in on Sunday. I drove him down myself, 12 hours door to door. Stopped a few times and gave him a couple of Guinnesses here and there, and he was happy.”

The Claiming Crown is a joint production of the National Horsemen’s Benevolent & Protective Association (NHBPA), the largest organization representing thoroughbred owners and trainers, and the Thoroughbred Owners and Breeders Association (TOBA). Churchill Downs and the Kentucky HBPA are hosting the 2022 event.

Horses made eligible to run in the Claiming Crown will come from all over the Midwest, East Coast, Mid Atlantic and Florida. The eight races offer total purses of $1.05 million, with Kentucky Thoroughbred Development Fund supplements ranging from $10,000 to $25,000 available for registered Kentucky-breds. The series culminates in the $175,000 (plus $25,000 KTDF) Claiming Crown Jewel at 1 1/8 miles for horses that have raced for a claiming price of $35,000 or cheaper in 2021-2022.

Entries will be taken Wednesday, with three non-Claiming Crown races on the 11-race card. First post is 1 p.m. ET.

In his first year of training, O’Callaghan was sent eventual $1.5 million-earner Kinsale King, a 4-year-old with terrible feet. He worked through those issues to where Kinsale King won his first four races over synthetic surfaces for O’Callaghan, including graded stakes at Hollywood Park and Santa Anita and Dubai’s $2 million Golden Shaheen in 2010. In his next start, Kinsale King was third in the Group 1 Golden Jubilee at Britain’s Royal Ascot.

“When you’re hanging with those people, it’s a different ballgame, kind of what you had in Kentucky last weekend with the Breeders’ Cup,” O’Callaghan said. “But claimers, they all eat the same as the good horses. The grooms are the same.”

O’Callaghan claimed Moti for $5,000 last June. The gelding races in the name of County Clare Stables, a shout-out to the area where O’Callaghan grew up in Ireland.

“I was in a syndicate last year with a filly back home,” he said. “We were sitting at the pub in April and we said, ‘Look, let’s put a few dollars together, a few Euros.’ Moti showed up in a claiming race, and I took him. There are seven of them, my wife and myself.”

While one partner has seen Moti race in person, “the rest of the lads have only seem him at the pub at 2 o’clock in the morning, with the time difference,” O’Callaghan said. “He’s running for the village back home, Newmarket-on-Fergus. We’re really looking forward to it.

“About three months ago, the Claiming Crown came on my radar. He just started getting really good. I’d mentioned to (his partners) about the Claiming Crown, explaining what this is, that it’s really like a Breeders’ Cup for claiming horses. It’s over 40 or 50 grand that he’s made for them, so they said, ‘Let’s rock and roll.’ Moti paid for the trip, for the hotel, car rental, flight tickets.

“I think it’s important we get these people involved. This is a very small version of (the nationally prominent syndicate) West Point Thoroughbreds. But it works for us. It only takes one horse to take you on a journey. It’s a fairytale, really, to bring these lads from the small village I come from. I bet our village is no bigger than Churchill Downs. There are 16 or 20 pubs, a a church and a school. He’ll be carrying the whole village on his shoulders. They’ll all be watching on the television.”

“I’m super excited. When you come to these things, you want to come with a chance. The competition is going to be stiff, but I know my horse will give 110 percent.”

With O’Callaghan aboard, Moti worked three-eighths of a mile Tuesday morning in 36.60 seconds at Churchill Downs.

“I went to the pole, and he just felt awesome,” O’Callaghan said. “There was a horse in front of me, about four or five lengths, so he kind of zoned in on it. He just carried me over the track, felt really good and hitting on cylinders. But he’s a cool character himself. When he’s retired, we’ll probably keep him in the backyard with the other 10 we have there that we shouldn’t have but we do. It’s a tough business, because you fall in love with them.”